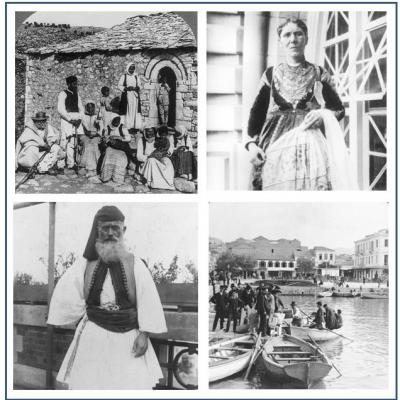 In the 19th century, Greece was under the rule of the Ottoman Empire, but the desire for religious freedom and cultural development in led to a nationalist revolt and the proclamation of Greek independence from the Ottoman Empire in 1821. In March 1822 the colors blue and white, expressing dedication to the Greek Orthodox faith, were adopted for the national flag. Unlike most national flags, there are no "official" shades of color. The Bavarian dynasty that ruled Greece from 1833 to 1862 had flags of light blue, corresponding to Bavarian symbols. Later a darker blue was substituted and, in the period 1967–74 when Greece was under a military junta, a very dark blue was official. The current flag law dates from December 22, 1978.

There are many opinions about the meaning of the symbols in the flag. The nine stripes are said to represent the number of syllables in the Greek phrase "Eleftheria H Thanatos", usually translated as "Freedom or Death!", a battle cry during the final revolt against the Ottoman Occupation. The motto symbolized—and still does—the resolve of the Greek people against tyranny and oppression. The equal-armed cross represents the Greek Orthodox church, the predominant and the only officially-recognized religion of Greece. The Church played a crucial role in the fight for independence against the Ottomans. The blue color represents the sea which is so important to Greece and such a major portion of its economy. The white represents the waves on the Mediterranean Sea. Blue has also always been a color of protection, seen in the blue eye amulets used to ward off evil, and white is seen as the color of purity.

Another interpretation is tied to Greek Mythology. In that version, it is said that the nine stripes on the flag represent the Nine Muses of Greek mythology, the Greek goddesses of inspiration in literature, science and the arts. In that version, the colors of blue and white represent Aphrodite, the Greek goddess of love and beauty, rising up from the sea foam. (The photographs and most of the text are from the Americans All Classroom Resources.)