Japanese Americans' Contributions to Our Nation 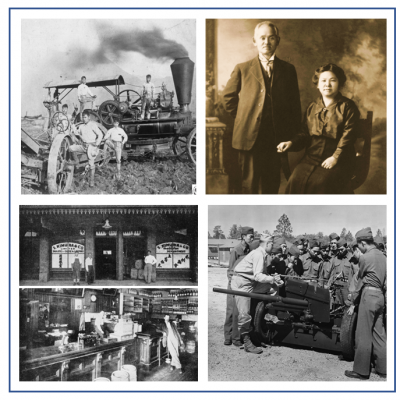 The Nisei (US-born children of Japanese immigrants) have made significant contributions to the agriculture of the western United States, particularly in California and Hawaii. They improved upon the sophisticated irrigation methods introduced by their nineteenth-century immigrant ancestors that enabled the cultivation of fruits, vegetables, and flowers on previously marginal lands. While they prospered in the early 20th century, most lost their farms when they were forcibly interned in ten different camps across the US after the start of World War II. The internments were based on the race or ancestry rather than activities of the citizens. Ironically, at the same time, many Japanese Americans served with great distinction during the War in the American forces. The 442nd Regimental Combat Team/100th Infantry Battalion is one of the most highly decorated units in U.S. military history.

Sadly, most families lost their farms after the War, but Japanese Americans remain involved in these industries today, particularly in southern California and to some extent, Arizona, due to the areas' year-round agricultural economy; and as descendants of Japanese pickers who adapted farming in Oregon and Washington state. Significant Japanese immigration did not occur again until the Immigration Act of 1965 ended 40 years of bans against immigration from Japan and other countries.

Today, Americans have a more positive opinion of Japanese culture, two of which may be the impact of Japanese technology (car and electronics) and knowledge gained through reading novels like James Clavell's ''Shogun.'' Japan's influence has even affected what people eat; the number of Japanese restaurants in this country has increased significantly and they are serving many varieties of sushi to guests who, in the past, would not have welcomed eating raw fish.