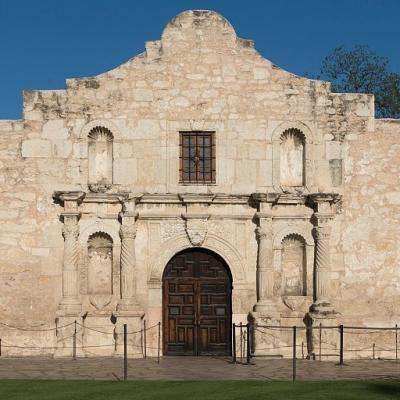 The Irish National Flag stands in a place of honor inside The Alamo in recognition of the largest ethnic group to defend that icon of independence. Renowned Author, James Michener, once said The Irish gave Texas it's basic character. If Texas character is one of determination and bravery, then the celebrated scribe hit the nail right on the head. Irishmen and women have played pivotal roles in the Lone Star State from the start, but their role in the heroic stand for independence at an obscure military garrison called Alamo has sadly slipped through the cracks of history.

Every St. Patrick's Day, the Harp and Shamrock Society of San Antonio lays a wreath at the old mission chapel as a Marine Corps bugler plays taps and the Irish Flag permanently stands proudly inside the front door of the 17th-century shrine. Why the high regard for the Irish in the heart of the Lone Star State? Irish men and women not only gave the ultimate sacrifice during the siege of that mission in 1836, they also played a role in the founding of the first Spanish Presidios while fighting off Comanche and Apache natives. A colorful Irishman was the first to map the second biggest state in the Union. He was Dubliner Hugo O'Connor who was chosen as Governor of New Spain in 1767. To avert marauding bands of Comanche and Apache warriors, he built a system of 22 mission forts that stretched all the way to California as a defensive buffer—one of which was that small Franciscan Mission in present-day San Antonio.

In 1803, the Mission at San Antonio was converted into a Military fort with the arrival of a company of San Carlos De Parras from El Alamo in Coahuila, hence the name ‘Alamo’. The Mexican army held the city of San Antonio under General Martin Perfecto Cos. The Texan forces comprised largely of volunteers who were mostly Irish and Irish American settlers and 23 mostly Irish American soldiers of the New Orleans Grays, a regiment under Colonel William G. Cooke—the son of Irish parents. General Santa Anna with a force of 13,000, headed for San Antonio to retake the city.  Before retreating to the relative safety of the Alamo, one of the Irish soldiers of the New Orleans Grays hoisted a flag to further gall Santa Anna. It was a tricolor with two stars meant to represent Coahuila and Texas. Santa Anna had just crushed a similar uprising in Coahuila and was enraged by the cheeky Irishman.

Inside the Alamo were many Irish and Irish-American settlers. The three most prominent among them were Davy Crockett who was descended from Ulster Irish stock as did Jim Bowie who was renowned for his skill with the oversized knife that bears his name and William Travis whose grandmother was Irish. Irishman George Childress was responsible for Crockett's involvement with his passionate speech in Tennessee to throw off the yoke of Mexican oppression.

Travis, after entering the Alamo, sent a letter to another Irish-American, James Fannin, seeking reinforcements. We have removed all of the men to the Alamo where we make such resistance as is due our honor and that of the country. In this extremity, we hope that you can send us all the men you can spare promptly. We have one hundred and forty-six men, who are determined never to retreat.  Sadly, the only men who answered the call were 32 men from the Irish settlement at Gonzalez. One of the Irishmen who served under Travis at Alamo, Joseph M. Hawkins, wrote to Travis. Be consoled, fight the good fight. Fight and we are with you to a man. Let the low, intriguing Mexican speculators know, that the sons of Washington and St. Patrick will not submit to delusion, rascality and usurpation. May God Bless you and prosper you is the sincere wish of an honest son of Erin and a friend to Texan Independence.

From the outset, the odds were heavily stacked against the men within the Mission walls. One last attempt at a peaceful resolution to the stand-off was made by Irish-American Green B. Jameson, who was largely responsible for designing the Alamo's defensive trenches. He rode from the fort bearing a white flag and a message written by Jim Bowie. Santa Anna replied. The Mexican Army cannot come to terms under any conditions with rebellious foreigners. Travis was enraged and said I would rather die than surrender to the Mexicans. Davy Crockett was the emotional leader during the onslaught; one eye-witness reported Crockett was everywhere. He could shoot from the wall or through portholes. Then he would run back and say something funny. During the siege, he took up the violin and played rousing tunes to boost morale. The defenders held out for 13 days largely due to Jameson's cleverly designed trenches. Legend has it that the last man to die in the fort was an Irishman—Major Robert T Evans, the ordnance officer whose last duty was to blow up the armory before it could be captured. It is reported that he succeeded and that a furious Santa Anna repeatedly stabbed his lifeless body. 182 Texans were killed, 13 of them were born in Ireland and countless others were of Irish descent. The spark lit at the Alamo became a roaring flame and Santa Anna was defeated by Sam Houston, another descendant of Ulster Irish immigrants. They were all shining examples of Irish-Americans who helped to shape America! 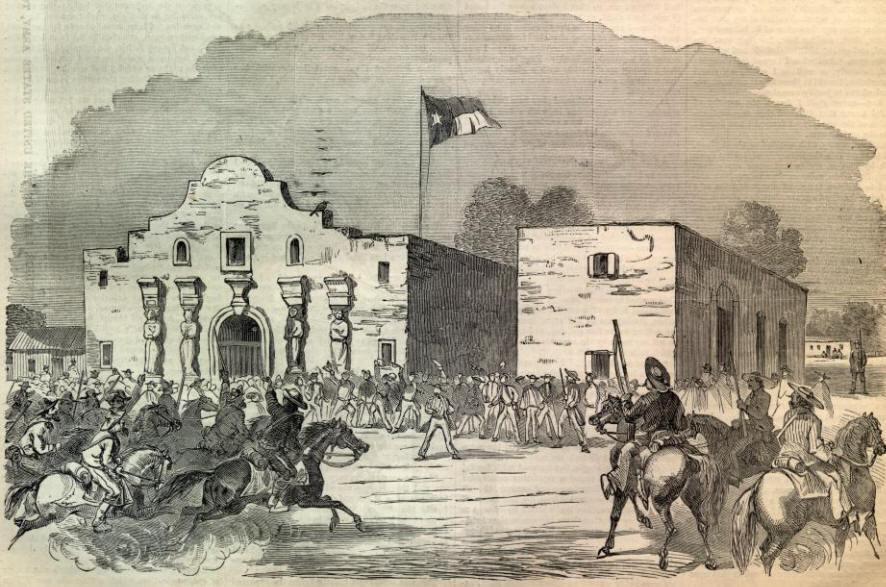