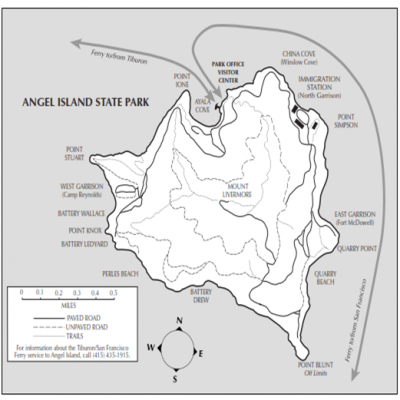 Because most European immigrants who came to the United States passed through the admission process on Ellis Island in New York harbor, the Ellis Island Immigration Station is a famous historic site. Yet it was not the only major port of entry for immigrants. Between 1910 and 1940, Angel Island in San Francisco Bay was the location of a large and imposing government compound where immigrants seeking entry into the United States via Pacific routes were processed. Often referred to as the Ellis Island of the West, this one-mile-square state park is the largest island in San Francisco Bay. It was christened Isla de Los Angeles by a Spanish explorer, Juan de Ayala, in 1775.

Native Americans had used the island for thousands of years. In the early 1800s, Russian sea-otter hunters visited it. In the mid-1800s, the United States government began developing the island. Gun batteries on Alcatraz and Angel Islands formed the inner defense of San Francisco Bay. The island was a favorite dueling ground for San Franciscans during the mid-nineteenth century and was a military staging site during three wars.

Of the 1 million immigrants processed at Angel Island Immigration Station, approximately 175,000 were Chinese and 117,000 were Japanese. Immigrants also arrived at Angel Island from India, Italy, Russia, Armenia and Ireland. The average length of stay for a detainee was two weeks; the longest was 22 months. Between 75 percent and 80 percent of the immigrants successfully entered America through this station. See the video Island of Secret Memories.

Entry to the United States

Gaining entry into the United States was complicated for the Chinese by the Chinese Exclusion Acts of 1882, 1888, 1892 and 1902 and the Immigration Act of 1924. These acts increased restrictions on Asian immigrants, especially laborers, until only students, teachers or merchants were admitted to America. Clearly discriminatory— no other national group was denied entry to the country—these exclusionary laws were prompted by racism and fear that laborers from China would take jobs away from European American workers. This fear was aggravated by a severe economic depression coupled with surges of new immigrants entering the United States from Europe.

Despite their early arrival in California and their contributions to the growth of the state, Chinese immigrants experienced growing prejudice in the 1870s. The first Chinese immigrants had worked in the gold fields. When the wealth from the gold fields diminished, Chinese workers were recruited to build the railroads linking the East and West Coasts. In time, Chinese people settled into a variety of occupations in agriculture, fishing, business and light industry.

To enforce the Chinese Exclusion Acts, the federal government built the immigration station compound on Angel Island, chosen because it isolated the immigrants from their relatives and friends on the mainland. After the station was opened in 1910, immigration officials boarded ships arriving in San Francisco to inspect each passenger’s documents. Those whose papers passed inspection were free to go ashore in San Francisco; those whose papers did not pass inspection were transferred to a ferry and taken to Angel Island.

When the immigrants approached the station, they saw a beautiful island with wooden buildings. They were coming to Gam Saan (Gold Mountain) to realize their dreams. Today a large bell sits on the beach. It is the original fog-warning bell that sat at the end of the landing pier. Years ago, it disappeared from Angel Island and was found in a San Diego junkyard. The two-ton bell was restored and returned to the island, first to serve as a marker at Ayala Cove and later to sit at its present site in China Cove.

The immigration station extended from the pier to the top of the hill, where there was housing for station employees. A bustling center, it had its own power and lighting system, water system, dormitories, hospital, dining facilities, and staff home and administration facilities. It could handle up to 2,500 immigrants per day and had sleeping accommodations for 1,000. Of the 20 original buildings, only 4 remain: the mule barn or stable (later used for linen supply, a garage and housing for non-Asian cooks), the detention center, the hospital and the power station (a steam-generating plant). After the administration building burned in 1940, the homes of the immigration station staff were dismantled. The other buildings deteriorated, and all but the detention center are currently off-limits to the public.

Men and women, in separate shifts, walked to the dining hall from the barracks through a covered passage. Today a granite monument stands near the site of the dining hall. The translation of the Chinese inscription on the monument is as follows:

Leaving their homes and villages, they crossed the ocean
Only to endure confinement in these barracks;
Conquering frontiers and barriers, they pioneered
A new life by the Golden Gate.
--Ngoot P. Chin

On the hill behind deodar cedars was the hospital. It is closed now and awaiting funds for restoration. Behind the hospital are two World War II prisoner-of-war barracks. Building 317 was known as the “detention barracks.” Still surrounded by a high barbed-wire fence, it was guarded by two watchtowers. The second floor served as a federal penitentiary until Alcatraz opened in 1934. For many years hardened convicts were housed in the same buildings as the immigrants/detainees.

Today the women’s quarters house a pictorial history of Chinese Americans during the past 100 years. Two of the original metal bunks have been reinstalled. The other 16 bunks are props that were created for the television film “Paper Angels.” Bunks were tiered three high and two across so that six people could sleep between two poles. About 70 to 100 women and children could have lived there at one time. They were let out into a small exercise yard, but most of the time they remained in this small dormitory room or in the sitting room, which is the present reception area. In the early 1920s, the women and children were housed on the top floor of the administration building. Once a week, the men and women were escorted to a storehouse at the dock where they could select needed items from their luggage. Sometimes women and children were allowed to walk the grounds in a supervised group, but the men were confined to the barracks and the yard. All immigrants were subjected to medical examinations to determine whether they were carriers of communicable or infectious diseases. Chinese people, not used to this type of examination, found the physicals extremely embarrassing.

Privacy was minimal everywhere. The bathrooms never had any stalls. The women washed themselves from bowls at their bunks and under their clothes rather than in the showers. For women, deportation was more traumatic than for the men. Women could not, for instance, jump ship in a foreign port and earn the wherewithal to try again. The conditions of detention and facing the disgrace of returning to China could lead a detainee to choose to commit suicide in one of the two showers, and people spoke about suicides occurring, though there is no evidence in the historical record of people who chose this way to deal with their situation.

In the men’s barracks, one can still see poems carved in the wood. The “poem room” contains the best-preserved carving, along with an English translation. This room was used as a toilet, bath and dressing room until it became too small. The poems are composed in the classical style of the Tang dynasty. Many of the men who passed through there were the brightest young men from their villages and they were reasonably literate, 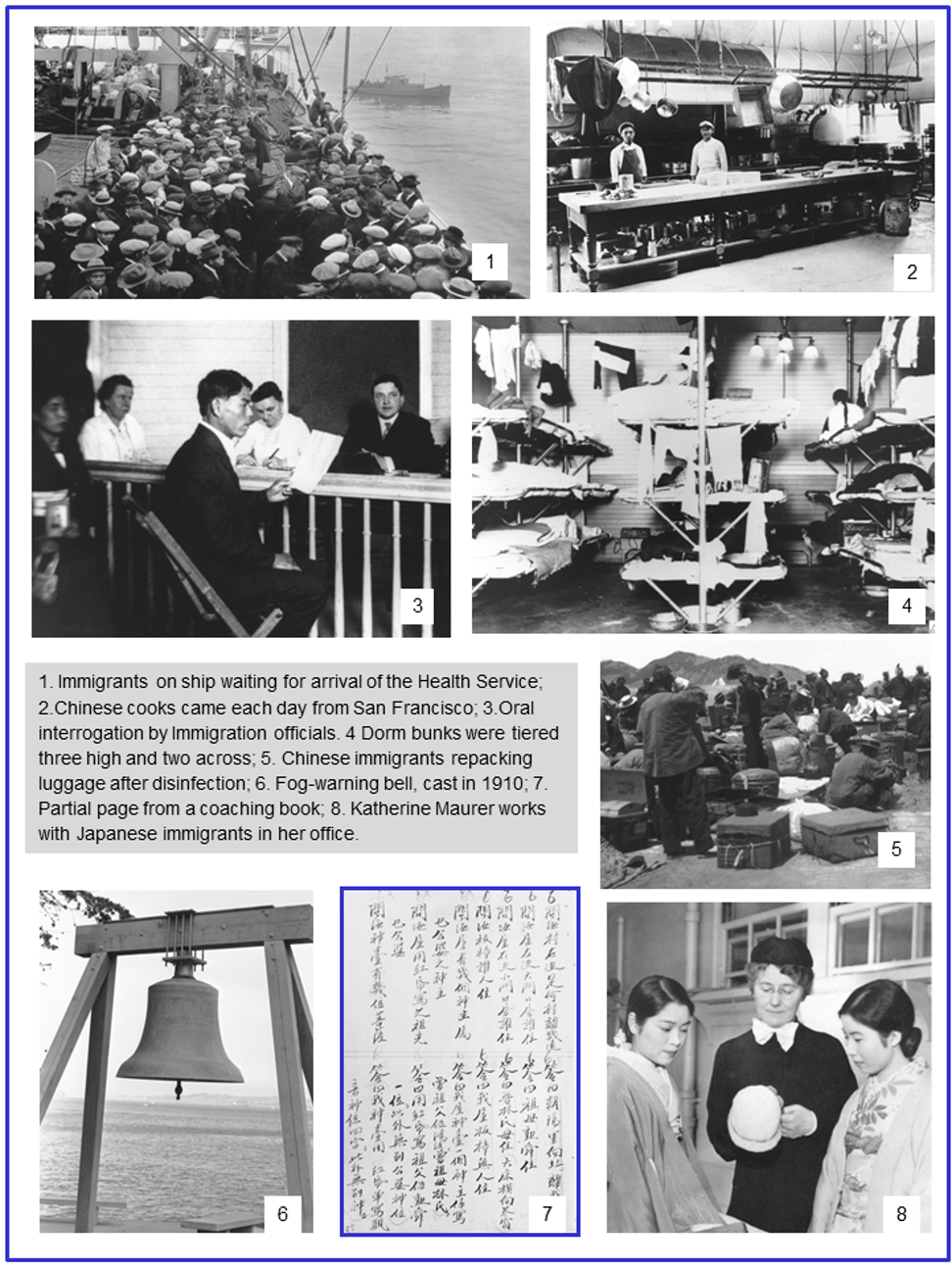