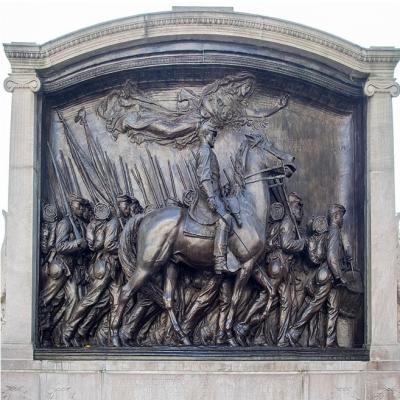 On January 26, 1863, Secretary of War Edwin M. Stanton authorized Massachusetts Governor John Albion Andrew to create volunteer companies of artillery "for duty in the forts of Massachusetts and elsewhere, and such corps of infantry for the volunteer military service as he may find convenient. Such volunteers to be enlisted for three years unless sooner discharged, and may include persons of African descent organized into separate corps."

On February 2, the Governor sent a letter to Francis G. Shaw, a prominent Boston abolitionist, to enlist his help in convincing Shaw's son, Captain Robert Gould Shaw, to command the 54th Massachusetts Volunteer Infantry. It would become the first regular army regiment of African American soldiers raised in the North. Captain Shaw, a commissioned officer in the Union Army, telegraphed his acceptance. Born in Boston on October 10, 1837, and admitted to Harvard College in 1856, Shaw had discontinued his studies in the third year to join the army. He entered the 7th New York National Guard, then received a commission as second lieutenant in the 2nd Massachusetts Infantry, and was later promoted to captain. As a result of his appointment to command the 54th Massachusetts Regiment, he received the rank of colonel.

Once his appointment was confirmed, Shaw began to recruit his solders. He was assisted by Lt. Colonel Norwood Hallowell (see his story below) and the regiment became their training at Camp Meigs. Although Shaw was not convinced about the fighting qualities of this new regiment, he was impressed with their dedication and devotion to the task. Throughout his career, he devoted himself to proving that his African American soldiers could fight just as well as any white soldiers.

Governor Andrew enlisted the support of Mayor George Luther Stearns of Medford, Massachusetts, who had assisted abolitionist John Brown in his plan for giving freedom to the slaves. Stearns organized a committee for the task, and it included attorney John M. Langston,   businessman, lawyer and shoe merchant O.S.B. Wall and abolitionist and statesman Frederick Douglass. Their appearances, speeches and personal contacts help increase the enlistments of black men for the Massachusetts cause. On March 2, 1863, Douglass issued his famous announcement, "Men of Color to Arms," and urgently requested that this enlistment opportunity be accepted. On June 26, 1863, Mayor Stearns wrote to Secretary Stanton, "My regiment is progressing handsomely, and black men begin to understand they gain nothing by standing off, but if they were to gain their rights and secure protection at the hands of the government, they must rally at its call."

The other persons nominated to command the regiment were carefully selected by Governor Andrew: fourteen of the twenty-nine appointed were veteran soldiers, six had been previously commissioned. Several were Harvard men, and others were descendants of soldiers who had served in the American Revolution and the War of 1812. The motives of these white soldiers in joining this experiment were significant since the country, generally, was opposed to the idea of using black men in the Army, because they would not make good soldiers. It required courage for those white men to accept such a commission in view of this opposition.

One of Shaw’s first military actions was participating in the raid on Darien, Georgia. The senior officer in charge of that action was Col. James Montgomery, an abolitionist zealot with experience in the brutal fighting along the Kansas-Missouri border. When they approached the town, the few residents immediately fled, leaving the town virtually deserted. Montgomery, despite Shaw’s protects, then ordered his men to vandalize the town, taking anything of value they could find. Once that was done, he ordered the town burned down. Shaw was outraged and would not give the orders to his men and they stood by and watched in disgust. He had trained them to be efficient soldiers, not vandals. (This conflict was shown as part of the movie “Glory.") Also see Video clip) He was soon to get the chance to have his Regiment engage in a real battle. The place was Fort Wagner.

African American soldiers were active in the attempt to capture Fort Wagner, a beachhead fortification on Morris Island, South Carolina that covered the southern approach to Charleston Harbor. The Union Navy attempted to reduce the defenses of Charleston in early 1863 with little success. On July 11, 1863, Brig. Gen. Quincy A. Gillmore ordered the first assault on Fort Wagner with one brigade, but it met with little success. His beachhead was reinforced and Gillmore made plans to attack the fort again. On July 16, 1863, the 54th Massachusetts was attacked by a much larger Confederate force on James Island, which also protected Charleston Harbor from an attack from the south. Although they inflicted heavy losses on the enemy, they were forced to withdraw from the field of battle. Their participation, however, saved three companies of Union troops.

A second attack was then ordered on Fort Wagner and it was to include the soldiers of the 54th Massachusetts Regiment. They marched through swamps and mud for two days, then joined with the Union forces on the morning of July 18. Although wet, hungry, and weary, they prepared for the assault. All afternoon the guns from the fleet and a semicircle of batteries poured cannon shot upon the fort. The battle line was formed under the command of General Strong, with the 6th Regiment from Connecticut under the command of Colonel John Lyman Chatfield, the 48th Regiment from New York, the 6th Regiment from Pennsylvania and the 9th Regiment from Maine.

The 54th Massachusetts was the only regiment of black soldiers in the line of battle. It was assigned the post at the head of the column and was to lead the charge. They marched toward the fort until they were about sixteen hundred yards from it, got into battle formation and then marched four hundred yards nearer. There was still little firing upon them. With the order to charge from Colonel Shaw, the regiment advanced in quick time and then in double-quick time. Grapeshot fell and musket fire began when they were within one or two hundred yards of the fort. Though their ranks were seared and divided by the losses of fallen men, the brave soldiers continued the march forward across the three-foot ditch of water and mounted the parapet. Sergeant Major Lewis Henry Douglass, son of Frederick Douglass, reached the ramparts shortly after Colonel Shaw had shouted to his men, "Let's fight for God and Governor Andrew." The flag was planted there by the standard-bearer, Sergeant William H. Carney (see his story below), but the fire of the defenders became so intense that the attacking Union troops were forced to retreat.

Colonel Shaw fell mortally wounded while waving his sword and crying out, "Onward boys." It was said that he was "one of the bravest and most genuine men. His soldiers loved him like a brother and go where you would through the camps you would hear them speak of him with enthusiasm and affection." Under a flag of truce, an effort was made to obtain the body of Colonel Shaw, but the searchers were informed, "We have buried him with his nigxxrs." This action, although intended to be an insult, was actually viewed as a tribute. His life with his soldiers made it clear that he would have regarded this as an honored place to be laid to rest. A monument to the memory of Shaw and his soldiers has been erected on the Boston Common; and the Gilmore Medal was awarded to the gallant soldiers of this regiment. The valiant combat role that the 54th Massachusetts played at Fort Wagner was a major example that demonstrated to skeptics that African American soldiers would fight bravely if given the chance. 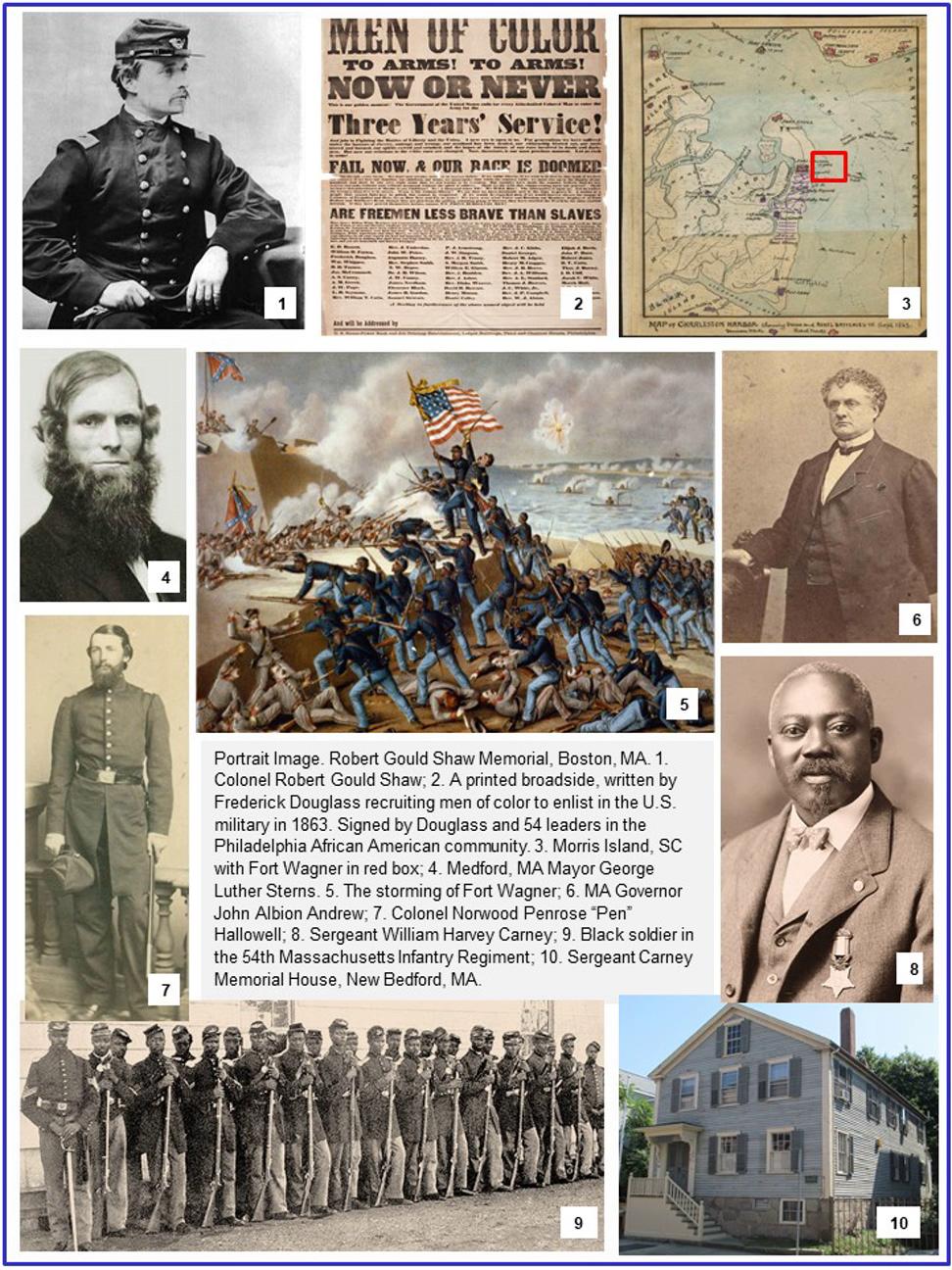