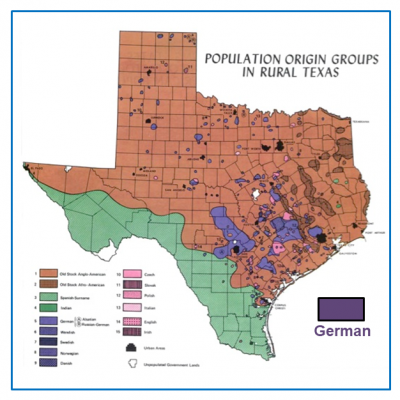 The largest ethnic group in Texas derived directly from Europe was persons of German birth or descent. As early as 1850, they constituted more than 5 percent of the total Texas population, a proportion that remained constant through the remainder of the nineteenth century. Intermarriage has blurred ethnic lines, but the 1990 United States census revealed that 2,951,726 Texans, or 17½ percent of the total population, claimed pure or partial German ancestry. Germans rank behind Hispanics and form the third-largest national-origin group in the state. However, most persons of German descent do not regard themselves as ethnic Germans. From their first immigration to Texas in the 1830s, the Germans tended to cluster in ethnic enclaves. A majority settled in a broad, fragmented belt across the south-central part of the state. This belt stretched from Galveston and Houston on the east to Kerrville, Mason, and Hondo in the west; from the fertile, humid Coastal Plain to the semiarid Hill Country. This German Belt included most of the Teutonic settlements in the state, both rural and urban.

The German Belt is the product of the concept of "dominant personality," the process called "chain migration," and the device of "America letters." Voluntary migrations generally were begun by a dominant personality, or "true pioneer." This individual was forceful and ambitious, a natural leader, who perceived emigration as a solution to economic, social, political, or religious problems in his homeland, and used his personality to convince others to follow him in migration. In the case of the Texas Germans, Friedrich Diercks, known in Texas under his alias, Johann Friedrich Ernst, was the dominant personality. Ernst had been a professional gardener in the Grand Duchy of Oldenburg in northwestern Germany. He immigrated to America intending to settle in Missouri, but in New Orleans, he learned that large land grants were available to Europeans in Stephen F. Austin's colony in Texas. Ernst applied for and in 1831 received a grant of more than 4,000 acres that lay in the northwest corner of what is now Austin County. It formed the nucleus of the German Belt.

Ernst wrote lengthy letters to friends in Germany, and through these "America letters" he reached and influenced other prospective migrants. He described a land with a winterless climate like that of Sicily. It had abundant game and fish, was fertile and rich, and awaited German labor to make it produce abundantly. Taxes were virtually nil, and large tracts of land were available for only a surveyor's fee; hunting and fishing required no licenses. Texas was an earthly paradise. Like other writers of America letters, Ernst stressed the positive aspects of the new land and downplayed or omitted the negative. One of his letters appeared in a newspaper in northwestern Germany and in an emigrant guidebook, thus greatly magnifying his role in promoting the migration.

Because of these letters, a small, steady stream of migrants left home for Texas. Within ten years they had established several rural communities near Ernst's grant in south-central Texas. In this migration process, people moved in clusters from confined districts to settle similarly confined colonial areas overseas. This led to people from small rural parishes in Germany settling all or part of a county in Texas. The influence of dominant personalities moved easily among people who knew each other, and by personal contact, the decision to emigrate spread quickly. The migration set in motion by Friedrich Ernst drew principally from districts in Oldenburg, Westphalia and Holstein.

In the late 1830s German immigration to Texas was widely publicized in Germany, attracting a group of petty noblemen who envisioned a project to colonize German peasants in Texas. The nobles hoped to gain wealth, power, and prestige, as well as alleviating overpopulation in rural Germany. Their organization, variously called the Adelsverein, the Verein zum Schutze Deutscher Einwanderer in Texas, or the German Emigration Company began work in the early 1840s. They chose Texas as the site for their colony, in part because of Ernst’s publicity and also that Texas was an independent republic where the princes might exercise some political control. Though the Mainzer Adelsverein was a financial disaster, it transported thousands of Germans, mostly peasants, to Texas. Between 1844 and 1847 more than 7,000 Germans reached the new land. Some of the immigrants perished in epidemics; many stayed in cities such as Galveston, Houston, and San Antonio; and others settled in the rugged Texas Hill Country to form the western end of the German Belt. The Adelsverein founded the towns of New Braunfels and Fredericksburg.

Most of the new immigrant clusters came from west-central Germany, particularly Nassau, southern Hanover, Brunswick, Hesse, and western Thuringia. The nobles focused their advertising and recruitment on these provinces, their home districts. John O. Meusebach, for example, entered Texas as one of the leaders of the Adelsverein, and some thirty-four villages in his home county, the Dillkreis in Nassau, contributed to the migration. The chain-migration process in the Adelsverein movement drew on both the local and provincial levels. Some farm villages lost a large part of their population to the Texas project.

At about the same time, another colonization project was launched. The Frenchman Henri Castro directed a project that moved more than 2,000 German-speaking settlers, mainly from clusters in the Upper Rhine Plain of Alsace, to Medina County, west of San Antonio. Castroville, founded in 1844, became the nucleus of the Alsatian colony, though many of the immigrants settled in San Antonio because it offered better economic opportunities. The German settlers who followed Ernst and Castro generally were solid middle-class peasants. They were land-owning families, artisans, and, in a few cases, university-educated professional people and intellectuals who believed their futures were cramped by the social and economic system at home. They were not poverty-stricken and oppressed and had the substantial cash investment required in overseas migration.

By 1850, when the organized projects ended, the German Belt in Texas was well established. America letters and chain migration continued through the 1850s but stopped with the Union blockade of Confederate ports. During the 1850s the number of German-born persons in Texas more than doubled, surpassing 20,000. As the German Belt expanded, settlements entered the sandy post oak woods in Lee County, where some 600 Wends (or Sorbs) from Oberlausitz planted a colony centered on the community of Serbin. Many spoke German and Sorbian and considered Pastor John Kilian their leader. After the Civil War ended, ships loaded with German immigrants once again arrived at the Galveston wharves. From 1865 to the early 1890s, more Germans arrived in Texas than during the thirty years before the war. The number probably reached 40,000. Many of them settled in the rural areas and towns of the German Belt. Interestingly, the postbellum immigrants generally avoided the Hill Country.

Germans also settled elsewhere in Texas. By the 1880s German ethnic islands dotted north central, northern, and western Texas. However, ethnic islands failed to develop in East Texas, the Trans-Pecos, and the Rio Grande valley. As early as 1881, Germans founded the agricultural colony of Marienfeld (later Stanton) on the High Plains of West Texas. These settlers planted splendid vineyards, only to see many destroyed by drought. Most of the postbellum colonies did thrive, and those families generally came from areas of Germany that had supplied the prewar colonists.

However, during these years, larger numbers of colonists from the eastern provinces of Germany began arriving in Texas. Also, by the 1890s German immigrants who arrived earlier in Illinois, 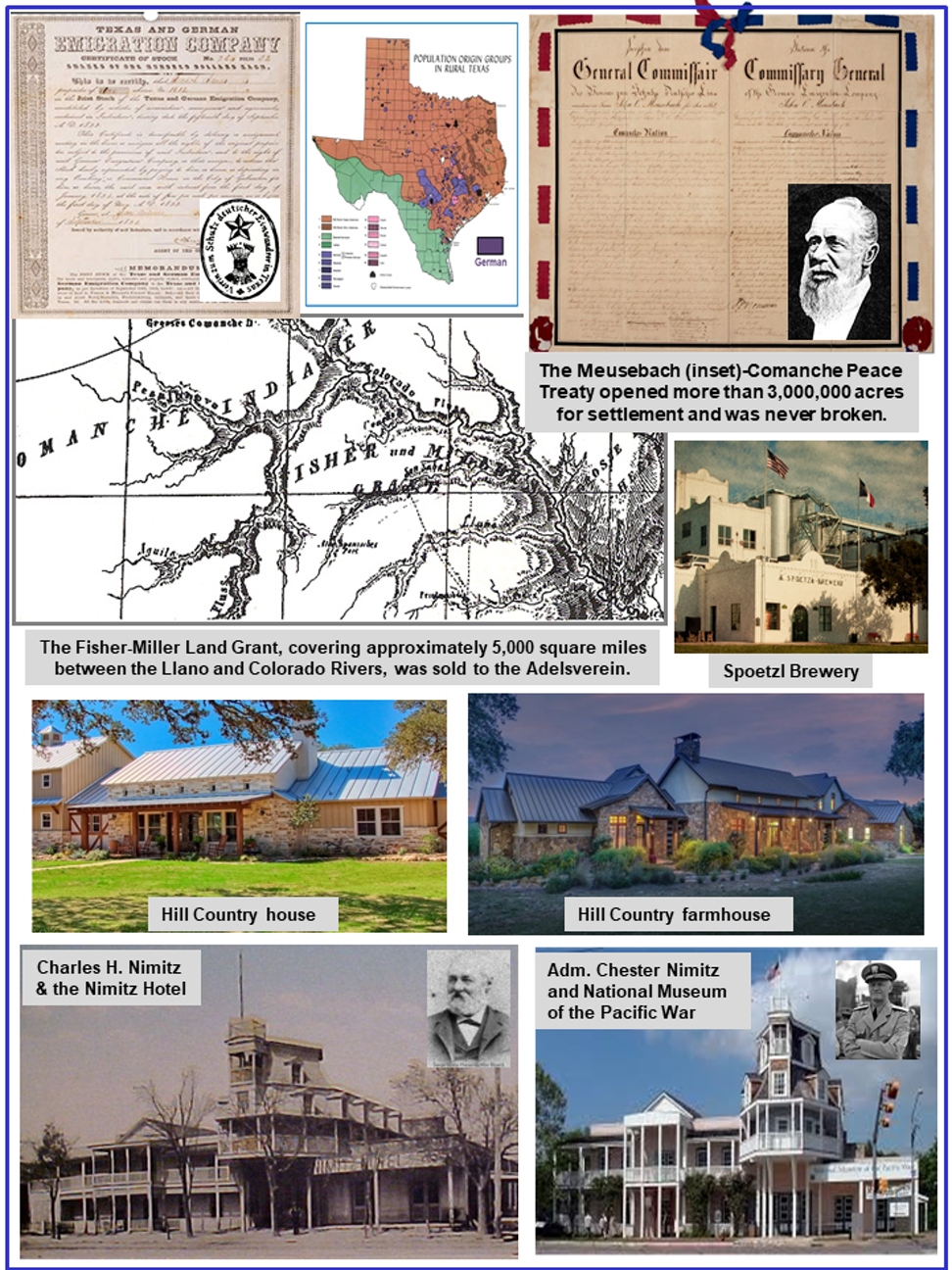