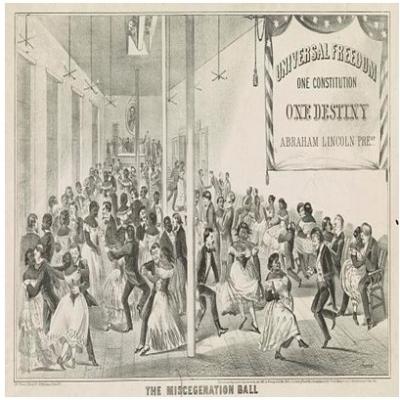 The word miscegenation comes from the Latin words miscere (to mix) and genus (type, family, or descent) and has been used to refer to cohabitation or intermarriage between racial groups. Regulated by state law, miscegenation was illegal in many states for decades. A fake pamphlet that circulated in 1864—“Miscegenation: The Theory of the Blending of the Races, Applied to the American White Man and Negro”—coined the term. Democrats wrote the tract, which advocated interracial marriage. But they tried to make it appear that the pamphlet was the work of Lincoln and his Republicans. (Didn’t work; Lincoln was re-elected that year.) Source

Typically defining mixed race marriages or sexual relations as a felony, these laws also prohibited the issue of marriage licenses and the solemnization of weddings between mixed race couples and prohibited the officiating of such ceremonies. Sometimes, the individuals attempting to marry would not be held guilty of miscegenation itself, but felony charges of adultery or fornication would be brought against them instead. Anti-miscegenation laws were interpreted to include Chinese, Mulattoes, Japanese, and Indian Americans as non-white by the early twentieth century, but the first attempts at restricting marriage, and therefore reproduction, of “undesirable” immigrants from Asia, began in 1875 with the Page Act, which effectively barred single Chinese women from entering the country. The Chinese Exclusion Act of 1882 barred Chinese and other Asian immigration completely and declared them ineligible for citizenship, leaving Chinese men without potential spouses they were legally allowed to marry. Source  With the passage of the Expatriation Act of 1907, which made a woman’s citizenship dependent upon her husband’s, all women were effectively discouraged from marrying Asian men. Chinese-American women, those born on American soil, were stuck between a rock and a hard place. They were outlawed from marriage with a white man but would be tripped of their citizenship if they married a Chinese man. One such case if that of Fung Sing (see below, 1925).

In many states, anti-miscegenation laws also criminalized cohabitation and sex between whites and non-whites. In addition, Oklahoma in 1908 banned marriage "between a person of African descent" and "any person not of African descent"; Louisiana in 1920 banned marriage between Native Americans and African Americans (and from 1920–1942, concubinage as well); and Maryland in 1935 banned marriages between blacks and Filipinos. While anti-miscegenation laws are often regarded as a Southern phenomenon, they existed in all but nine states. Source is Martyn, Byron Curti, Racism in the United States: A History of the Anti-Miscegenation Legislation and Litigation, pp. 1026, 1033–4, 1062–3, 1136–7.

1883: Pace v. Alabama (106 U.S. 583). The U.S. Supreme Court affirmed that Alabama's anti-miscegenation statute was constitutional. Section 4189 of the Code of Alabama declares that "if any white person and any negro, or the descendant of any negro to the third generation, inclusive, though one ancestor of each generation was a white person, intermarry or live in adultery or fornication with each other, each of them must, on conviction, be imprisoned in the penitentiary or sentenced to hard labor for the county for not less than two nor more than seven years."  This ruling was rejected by the Supreme Court in 1964 in McLaughlin v. Florida and in 1967 in Loving v. Virginia. Source

1925: Ex Parte Fung Sing, 6 F.2d 670 (W.D. Wash. 1925). An American-born Chinese woman was born of immigrant Chinese parents. She went to China in 1903, married a Chinese subject in 1920, and was widowed in 1924. The following year, she was refused entry into the nation of her birth upon his death because she had been married to a man racially ineligible for citizenship. Source

1930: The Motion Picture Production Code (popularly known as the Hays Code after its creator Will H. Hays) was the first attempt at introducing film censorship in the U.S. through laying down a series of guidelines to film producers, and part of the Code explicitly forbid the depiction of miscegenation. Source

1933: Roldan v. Los Angeles County (18 P.2d 706 (Cal. Ct. App. 1933). Salvador Roldan applied to the county clerk of Los Angeles County for a license to wed a woman of Caucasian descent and was refused such license. On a hearing of his application before the superior court for a writ to compel the issuance thereof he was found to be a "Filipino", viz., "an Illocano, born in the Philippine Islands of Filipino progenitors in whose blood was co-mingled a strain of Spanish", and not a Mongolian. The Court confirmed that the state's anti-miscegenation laws at the time did not bar the marriage of a Filipino and a white person. However, the precedent lasted barely a week before the law was specifically amended to illegalize such marriages. Source

1948: Perez v. Sharp (32 Cal. 2d 711). In the application for a license, petitioner Andrea Perez states that she is a white person and petitioner Sylvester Davis that he is a Negro and they seek to compel the County Clerk of Los Angeles County to issue them a certificate of registry (Civ. Code, § 69a) and a license to marry. (Civ. Code, § 69.) Respondent refuses to issue the certificate and license, invoking Civil Code, section 69, which provides: "... no license may be issued authorizing the marriage of a white person with a Negro, mulatto, Mongolian or member of the Malay race." The Court ruled that the state's ban on interracial marriage violated the Fourteenth Amendment to the U.S. Constitution. Source

1964: McLaughlin v. Florida, (379 U.S. 184). A Florida criminal statute prohibits an unmarried interracial couple from habitually living in and occupying the same room in the night-time. No other Florida statute penalizes precisely the same conduct when engaged in by members of the same race. The Florida statute denies the equal protection of the laws guaranteed by the Fourteenth Amendment and is invalid. Pp. 379 U. S. 184-196. Source

1965: In this written judgment, dated January 22, Leon M. Bazile, judge of the Caroline County Circuit Court, refuses a motion on behalf of Richard and Mildred Loving to vacate their 1959 conviction for violating the state law that forbids interracial marriage. Judge Bazile stated: "The parties were guilty of a most serious crime" . . . Almighty God created the races white, black, yellow, malay and red, and he placed them on separate continents. And but for the interference with his [arrangement] there would be no cause for such marriages. The fact that he separated the races shows that he did not intend for the races to mix. . . . The awfulness of the offense is shown by Section 20–57 which declares: "All marriages between a white person and a colored person shall be absolutely void without any decree of divorce or other legal process." . . . Then section 20–59 of the Code makes the contracting of a marriage between a white person and any colored person a felony. Conviction of a felony is a serious matter. You lose your political rights; and only the government has the power to restore them (Constitution Sec. 73.) And as long as you live you will be known as a felony." Source

1967: Loving v. Virginia, (388 US 1). This case involved Mildred Jeter, who was black, and white construction worker, Richard Loving. Because of Virginia's "miscegenation" law, they married in Washington, D.C. In 1958, they returned home to Virginia and were charged with unlawful cohabitation and jailed.