1900 (New Orleans, Louisiana): Robert Charles [7] had come to New Orleans from Mississippi. He was a self-educated activist for civil rights and believed in self-defense for the African American community. He encouraged African Americans to move to Liberia to escape racial discrimination and violence. The Robert Charles riots of July 24–27 were sparked after African American laborer Robert Charles fatally shot a white police officer during an altercation and escaped arrest. A large manhunt for him ensued, and a white mob started rioting, attacking Blacks throughout the city. The manhunt for Charles began on Monday, July 23, 1900, and ended when Charles was killed on Friday, July 27, shot by a special police volunteer. The mob shot him hundreds more times and beat the body. White rioting continued, with several Blacks killed after Charles had died. A total of 28 people were killed, more than 50 people were wounded. Blacks made up most of the fatalities and casualties.

1900 (New York City, New York): Racial tensions erupt into a full-fledged riot on August 13 after white plain-clothes patrolman Robert Thorpe is murdered in a street scuffle by “colored man", Arthur Harris when Thorpe attempts to arrest May Enoch, Harris' girlfriend. Large crowds of white men gathered, and rioting begins with indiscriminate attacks towards Black people, regardless of age or gender, along with reports of police brutality. This is done under the supervision of the police--with no legal ramifications. Accusations of police brutality continue and Tammany Hall is accused of corruption related to the riot. In December, an Official report of the Committee of Rules and Discipline of the Police Board is released; no police are found at fault.

1902 (Coos Bay, Oregon): On September 18, Alonzo Tucker, who had been accused of assaulting a white woman, was taken into police custody and placed in the local jail. Soon after, he escaped but was located the next day and shot in the leg. Although he died from that wound, a mob made up of white coal miners hanged him from a beam on the South Marshfield Bridge as a public spectacle. Even though newspapers reported that “not a masked man was in the [mob] and everything was done in broad daylight,” no one was held accountable for the lynching. He is the only person thus far documented to have been killed in Oregon between 1877 and 1950.

1903 (Urbana, Illinois): Jennie Steers, a Black woman, was charged with allegedly giving a glass of tainted lemonade to 16-year-old Elizabeth Dolan, the daughter of a local planter. Thinking Elizabeth died because of it, a mob traced the woman to her hiding place and brought her back to the scene of her crime. The mob took her to a tree, placed a rope around her neck and demanded a confession. The woman refused and was hanged. While the body was suspended, several bullets were fired Into it by bystanders.

1903 (Evansville, Illinois): This city is a good example of how the influx of African Americans influenced complex and conflicting notions of public order. As cities developed, Americans were increasingly concerned with public order. Saloons, brothels, and gambling halls were the seed beds of urban disorder, offering an antithesis to the image of a well-ordered urban America the Victorian middle class wanted to present. Yet, the very complexity of American cities in the nineteenth century meant that competing notions would emerge of what constituted public order. Immigrants, African Americans, and the commercial liquor interests developed ideals of order often in conflict with the Victorian ideal. Influenced by racist stereotypes, white Evansvillians questioned the moral order of African Americans. The incident that triggered the riot came when a Black man, Lee Brown (Robert Lee), shot Police Officer Louis N. Massey, who was attempting to arrest Brown following a dispute with another Black man at a local bar. Massey's wounds were fatal, but he managed to wound Brown. After it was learned that Massey was dead,  A large mob assembled outside the jail with the intent of lynching Brown. The Sheriff, sensing trouble, moved Brown out of jail but when the mob broke into the jail, Brown was gone. Violence led to multiple deaths and the governor declared martial law and sent in troops. Ironically, Brown never stood trial and died of his injuries in the new jail.

1904 (Doddsville, Mississippi): As hundreds of white people watched and cheered, a Black man named Luther Holbert and an unidentified woman were tortured and burned at the stake at the Eastland plantation. Holbert was accused of shooting and killing James Eastland, a white landowner from a prominent, wealthy local family that owned a plantation where many of the area’s Black laborers worked. After his shooting, James Eastland’s two brothers led the posse that captured Holbert and a Black woman. Soon after, one of James Eastland's brothers who led the lynch mob had a son and named him James; that James Eastland later became Mississippi's longest-serving U.S. Senator and spent his career championing white supremacy and opposing the civil rights movement.

1905 & 1909 (Harrison, Arkansas): In the 1900s, relations between the white and Black communities was relatively stable. However, the North Arkansas Railroad, which came through town and provided new jobs in 1901, went bankrupt in 1905, created unemployment for the townsfolks, both Blacks and whites, especially those who had come to town to work on the railroad. When a Black man supposedly broke into a white man’s home, a mob ran most black people out of town by shooting through windows and burning down their houses. Those who stayed fled in 1909 after a Black man was convicted of raping a white woman. This instantly gave the community a lasting reputation as a "sundown town" and one too dangerous for minorities.

1906 (Atlanta, Georgia): By the 1880s, Atlanta had become the hub of the regional economy, and the growth increased job competition among Black and white workers and heightened class distinctions. This caused concern among elite whites, who feared the social intermingling of the races, and led to an expansion of Jim Crow segregation, particularly in the separation of white and Black neighborhoods and separate seating areas for public transportation. The emergence of a Black elite also contributed to racial tensions, and race-baiting in the state's gubernatorial election brought it to a boil. [18] The Democratic candidates for governor, Hoke Smith and Clark Howell, played on whites' fear of a rising black middle class. Anti-black violence broke out in September after two newspapers printed stories about Black men assaulting white women. Most of the allegations were false. Mobs attacked streetcars, entering trolley cars and beat Black men and women. The militia was called in to control the violence which led to approximately 30 Black deaths and hundreds of injuries. (Video) 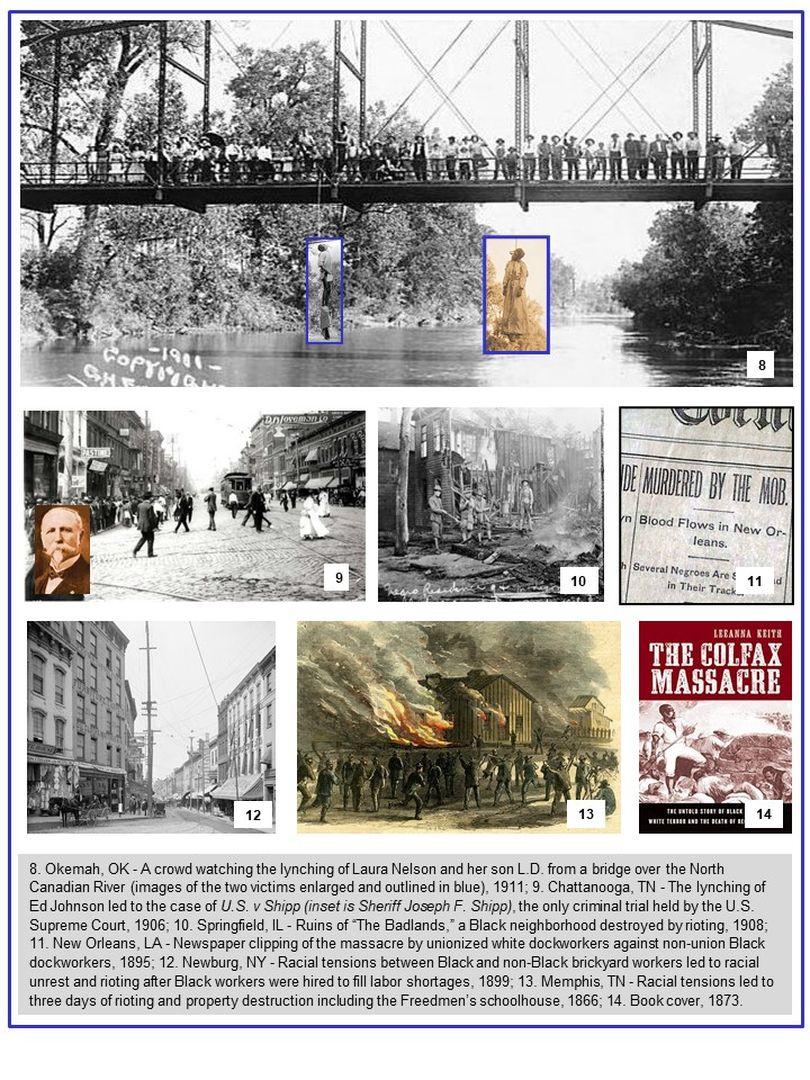