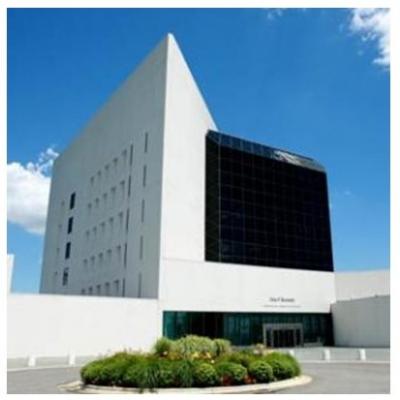 On September 20, 1961, President John F. Kennedy wrote the Archivist of the United States to ask him to consult with White House staff and representatives of Harvard University concerning establishment of a Presidential library in Cambridge, Massachusetts. President Kennedy announced then that he would follow precedents set by Presidents Hoover, Roosevelt, Truman and Eisenhower, and give his papers and memorabilia to the National Archives for a Presidential Library.

A month before his death, President Kennedy visited Cambridge, Massachusetts, and chose a site next to Harvard University for the Library. It was to be the place where the records of his Presidency could be kept and where he would have his office when he retired from public life.

Plans for the Kennedy Library began to take shape in December 1963, when members of President Kennedy's family met with several of his closest associates to discuss a suitable memorial. While many suggestions were offered by people in all parts of the country, Mrs. Kennedy and the other members of President Kennedy's family decided that the John Fitzgerald Kennedy Presidential Library and Museum should be the only official national memorial to the President.

They also agreed that the project should have three parts: a Museum, an Archive, and an educational Institute that would carry forward President Kennedy's interest in bridging the gap between the academic world and the world of public affairs.

The John Fitzgerald Kennedy Library, Inc.—a private, non-profit corporation—was chartered in Massachusetts on December 5, 1963, to construct and equip a library in Massachusetts to house and preserve the papers and historical materials of John F. Kennedy and his associates, and to transfer title of these to the United States as elements of a Presidential archival depository.

Principals in the original Corporation were Robert F. Kennedy, Stephen Smith, Robert McNamara, Douglas Dillon, and Arthur M. Schlesinger. Jr. Major financial contributors to the Corporation were political associates, corporations and foundations, foreign governments, private citizens and interest groups who wished to honor President Kennedy. In the end, million people from around the world, including school children, contributed to the building fund.

The trustees of President Kennedy’s estate, Jacqueline B. Kennedy, Robert F. Kennedy, and Edward M. Kennedy formally deeded his papers and historical materials to the United States by a deed of gift accepted by the Administrator of General Services on February 25, 1965.

The Kennedy Library Corporation, under the leadership of Stephen E. Smith, raised more than $20.8 million for both the construction of the John F. Kennedy Presidential Library and Museum and for the creation and endowment of an Institute at Harvard for the study of politics and public affairs.

In 1966, the Kennedy Library Corporation presented Harvard University with an $8 million endowment for the creation of the Institute of Politics. A living memorial to President John F. Kennedy, the Institute was created to compliment the work of the John F. Kennedy Presidential Library and Museum by helping to inspire the ideals of democracy and freedom in young people all over the world. Harvard University's Institute of Politics seeks to unite students, particularly undergraduates, with academics, politicians, activists, and policymakers on a non-partisan basis and to stimulate and nurture their interest in public service and leadership. The Institute also strives to promote greater understanding and cooperation between the academic world and the world of politics and public affairs.

The General Services Administration established the John F. Kennedy Presidential Library in temporary quarters in the Federal Archives and Records Center in Waltham, Massachusetts on October 1, 1969, and at that time announced the opening of the first portions of the Presidential papers for research use.

In 1975, the Kennedy Library Corporation abandoned plans to build the library on the site at Harvard University originally selected by President Kennedy due to prolonged delays in freeing the site for construction and opposition by some Cambridge residents who feared urban congestion caused by visitors and tourists.

The Library Corporation selected a new site for the library adjacent to the Harbor Campus of the University of Massachusetts Boston at Columbia Point in Dorchester. The 9.5-acre, waterfront site with panoramic views of Boston's skyline and Harbor Islands was donated to the Kennedy Library Corporation by the University of Massachusetts Boston with the consent of the state legislature.

From that point on, the Kennedy family involved a wide range of experts from different disciplines in Museum planning. Patricia Kennedy Lawford became overall Museum coordinator, working on a day-to-day basis with the architects, designers and Library staff.

A Museum advisory committee was appointed. Those involved in the planning visited the Hoover Library in West Branch, Iowa; the Franklin D. Roosevelt Library in Hyde Park, New York; the Harry S. Truman Library in Independence, Missouri; the Dwight Eisenhower Library in Abilene, Kansas; and the Lyndon Baines Johnson Library in Austin, Texas.

Each of the exhibits in the Kennedy Library Museum was developed in three steps: general guidelines and themes were developed; a search was made for the objects, pictures and documents which best illustrated those themes; and Kennedy family representatives met to approve the layouts.

In all, the family held 45 meetings on the Museum project between July 1976 and March 1979. The family's younger generation attended many of the meetings and contributed their opinions.

For advice on portraying Kennedy's presidential years, the advisory committee turned to those who had worked with President Kennedy in the White House—persons like Theodore Sorensen for domestic and foreign policy, Walter Heller for economic policy, Jerome Weisner for science policy, and Burke Marshall and John Seigenthaler for civil rights. 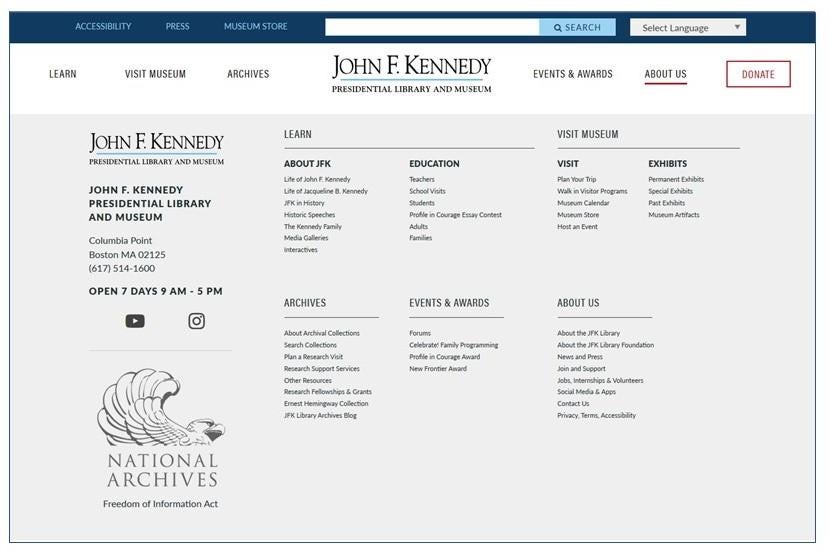 Sponsored By: Courtesy of the JFK Presidential Library and Museum
Printer-friendly version