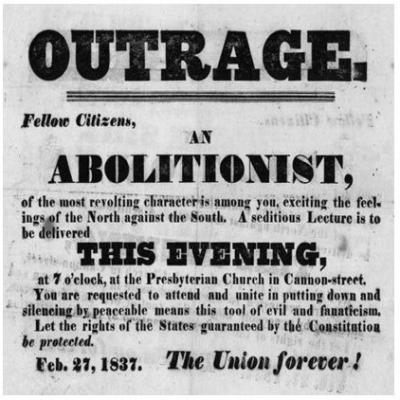 Violence against African Americans, both free and those who had escaped slavery, was not limited to the South, where their status was clearly defined. Slavery has existed in every human society at different times for a variety of reasons, but in America, slavery was linked directly to a system of racial superiority.

Note: Each photograph is linked to the text via a number in [bold brackets].

1824 & 1831 (Providence, RI) In October 1824, the riot in Hard Scrabble [1] town erupted when a free Black resident refused to move off the sidewalk so that white visitors could pass by them. In September 1831, the nearby neighborhood of Snow Town’s riot was caused by a sailor being shot by a Black man during a saloon brawl. At this time, there was racial tension between these two neighborhoods and Providence, partially because industrialization pushed white men into factory jobs; they took out their frustration on poor Blacks, who were viewed as shiftless criminals. In both riots, working-class whites destroyed multiple Black properties.

1829 (Cincinnati, Ohio) [2] In August, six days of riots (ignored by the police and the mayor) were triggered by racism and economic tensions due to competition for jobs between Irish immigrants and native Blacks and former slaves. Whites were also alarmed by the rapid increases of free and fugitive Blacks coming into the city. Merchants complained about the poor neighborhoods along the river as having ill effects on their waterfront shops and trade with southern planters. To make it more difficult for Blacks, beginning in June, they would be required to post surety bonds of $500 (equivalent to $12,005 in 2019) within 30 days or face expulsion from the city and state. This was in accord with the 1807 Black Law, which was intended to further discourage Black settlement in the state.

1831 (Southampton County, Virginia) Nat Turner was convinced that he was chosen by God to lead his people out of bondage. His mysticism brought him awe and respect as he quoted his theory of revolt from the Scriptures. Between August 21 and 23, Turner and his followers murdered the entire Joseph Travis family and then moved from plantation to plantation in Southampton County, killing 55 whites within 36 hours. [4] When the slaves' revolt became known, more than 3,000 whites came to the county to end the insurrection. A massacre of Blacks by the enraged whites followed. Turner initially got away but was finally caught and hung with 17 of his followers. Twelve were convicted and sent out of state, and 24 were acquitted. Source: Americans All.

1834 (New York City, New York) Beginning July 7, the city was torn by a huge anti-abolitionist riot that lasted for nearly a week until it was put down by military force. At times, the rioters controlled whole sections of the city, attacking homes, businesses, and churches of abolitionist leaders and ransacked Black neighborhoods. The underlying origins of the riots were the combination of nativism and abolitionism among Protestants who had controlled the city, and fear and resentment of Blacks among the growing underclass of Irish immigrants and their kin. On July 9, three interconnected riots erupted. First, several thousand whites gathered at the Chatham Street Chapel to break up a planned anti-slavery meeting. Second, the home and store of abolitionist Lewis Tappan [8] were vandalized, and third, at the Bowery Theatre, a mob went to avenge an anti-American remark made by abolitionist George P. Farren, the theatre's English-born stage manager. He had recently stated: “Yankees, they are a damn set of jackasses and fit to be gulled."

1834 (Canterbury, Connecticut) In 1833, Prudence Crandall [7] opened a higher education academy for "young ladies of color" at her Canterbury Female Boarding School. This came after local response prevented her from integrating the school she established in 1831 when she allowed Sarah Harris, a local African American young woman, to attend. Crandall and her students faced increased harassment and legal prosecution, yet classes continued until mob violence forced the school to close.

1835 (Nationwide) 147 riots broke out in U.S. cities this year, with the most frequent violence in Boston, Philadelphia and New York. In Boston, it was upper-class men who took to the streets to protest abolitionists. New England’s textile industry was tied to cotton growing, and businessmen worried the anti-slavery movement threatened their mercantile relationships with the South. Female abolitionists also threatened male social dominance.

1835 (Snow Riot, Washington D.C.) On August 12, Washington's first race riot was triggered by rumors of a slave attack on a white woman. It started when a mob of angry white men descended on the Epicurean Eating House [7] owned by Beverly Snow, a successful African American entrepreneur. The mob had heard that he made disparaging remarks about the wives of white mechanics who worked at the Navy Yard--which Snow denied. After that, the mob vandalized and destroyed Black homes, business, churches and schools, apparently looking to get rid of abolitionist literature. The larger context of the attack was the white working-class men's frustration over free Blacks' ability to work, and their resentment of Black competition for jobs. The clear result was the unleashing of white terror against Blacks. During the riot, with the help of white friends, Snow escaped and went to live in Canada.

1835 (Canaan, New Hampshire) The Noyes Academy, which also admitted women, was one of the nation's first racially integrated schools. It attracted eager African-American students from other states. The Academy was founded by sympathizers of the abolitionist movement, but it was unpopular with many residents who opposed having Blacks in the town. Outraged community leaders responded by dragging the academy building off its foundation and then ran the African American students out of town. The school was then replaced with Canaan Union Academy, and all students were white.

1835 (Boston, Massachusetts) The riots began on October 28, when a pro-slavery mob went looking British abolitionist George Thomas, who was scheduled to speak at the Female Anti-Slavery Society of Boston. Unable to locate him, they abducted William Lloyd Garrison, [5] publisher of The Liberator, a well-known abolitionist newspaper. The mob tied Garrison up and dragged him around town. He was rescued by the mayor, and put in jail for the night--for his own protection.

1836 (Cincinnati, Ohio) These riots had multiple causes. Race relations were tense because whites felt threatened by Blacks, many of whom had escaped from slavery, and were competing for jobs they felt were theirs to fill. In addition, whites did not want to offend slave owners across the Ohio River whose money they depended on, and finally, that abolitionists would continue to support African Americans in their desire for equality. In that regard, abolitionist newspaper publisher, James Gillespie Birney, [3] had set up the Cincinnati Weekly and Abolitionist, a newspaper sponsored by the Ohio Anti-Slavery Society. It constantly targeted slaveholders across the Ohio River in Kentucky with anti-slavery propaganda. That led to his presses being destroyed during the riots. 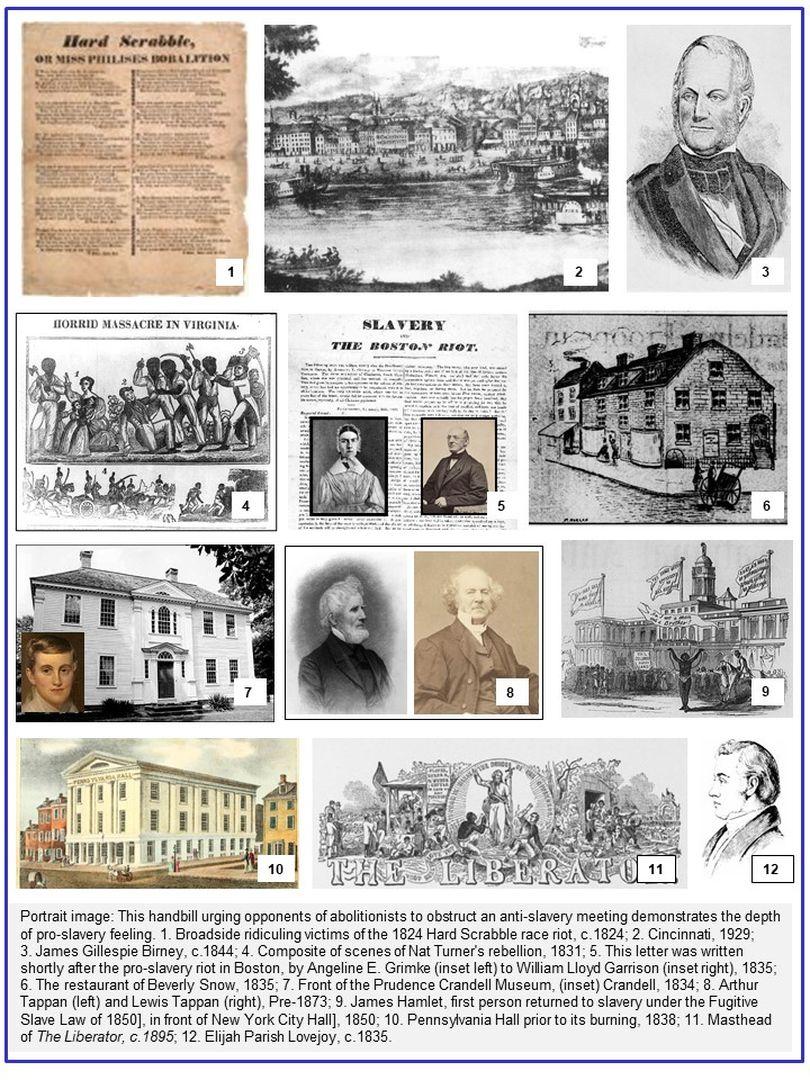