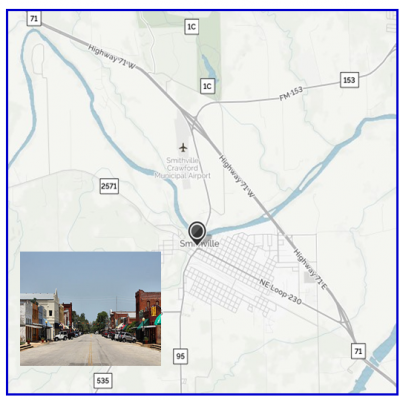 Before American pioneers moved into where Smithville would grow, Lipan and Tonkawa Indians already lived there. Nomadic buffalo hunters who held an uneasy peace with the Mexicans, the Tonkawa eventually formed an alliance with Stephen F. Austin and the Americans helped them in battles against the Comanches and Wichitas.

Smithville, just off State Highway 71 and ten miles southeast of Bastrop in southeastern Bastrop County, is on the original Mexican land grants given to Dr. Thomas J. Gazeley and Louis Loomis. Dr. Gazley arrived in 1827, received his grant in 1831 and settled here in 1837 following the Texas Revolution. He signed the Texas Declaration of Independence from Mexico and later became a judge and was elected to serve in the Republic of Texas Congress.  Gazeley operated a store where 3rd meets Highway 95 until his death in 1853. The community that sprang up around the store was named Smithville, after another early settler, William Smith. Smith and his family owned a store in the village centered along the Colorado River, east of Gazley’s land. J.P. Jones and Frank Smith opened a store in the community in 1867, and four years later the Smithville Presbyterian Church was organized. A post office was established in on August 23, 1876, and Smithville was described in May 1879 as a thriving village.

Those early settlers were joined by successful entrepreneur John Fawcett and statesman Thomas Hardman, both of whom lived a few miles to the West of Smithville. Local businessmen and farmers helped establish a ferry that crossed the Colorado River to help bring supplies to and from the village.

The original rural community of seventeen families began to grow when it became known that a railroad was to be laid through the area, Murray Burleson and his partners acquired land and formed the Smithville Town Company. Burleson donated the land to the Taylor, Bastrop & Houston Railroad Company to encourage the establishment of a depot facility at Smithville. On July 4, 1886, the first passenger train arrived in town. One of the earliest industries in town was a steam cotton gin and grist mill established by George W. Jones in 1890 when Smithville was a terminus of the T.B & H Railroad.

By 1890 Smithville had 616 residents, and its businesses included two hotels, three millineries, and a medical practice. In the 1890s the community boomed. Extension of the railroad line to Lockhart in 1892 brought more business, as did an extension of the line to Houston the next year. The line was renamed the Taylor, Bastrop and Houston in October 1886, and it was merged with the Missouri, Kansas and Texas (The Katy) system in 1891.

The biggest boost came in 1894 when the Missouri, Kansas and Texas established its central shops in Smithville, bringing a workforce of 500 men. The population quickly doubled, and the town was incorporated on March 30, 1895. In 1896 it had an estimated 2,500 residents, Methodist, Baptist, Presbyterian, and Catholic churches, two hotels, and numerous other businesses, including four physicians' offices, and was followed shortly by the creation of the Smithville School District. The first bridge was built across the Colorado River at the north end of Main Street in 1900, and Smithville had a population of 2,577, which was 10 percent of the Bastrop County population. A 1909 newspaper account described Smithville, headquarters for three divisions of the Missouri, Kansas and Texas line, as having a population of 3,500 and railroad shops, a roundhouse, and "a fine Y.M.C.A. building." At that time, it had a bank (established in 1907), and the Smithville Times had already been publishing for fifteen years. The population level through the early 1900s hovered between 3,000 and 4,000. It peaked in the mid-1940s at an estimated 4,200.

The city’s population reached a peak of 4,200 during World War II when many families of soldiers stationed at Camp Swift took room and board in Smithville homes. Smithville’s young people have contributed to both World Wars, Korea, Vietnam and the more recent conflicts throughout the world. These brave men and women are commemorated in the beautiful Smithville Veterans Park, dedicated in 2013.

Though railroad jobs were beginning to disappear, in 1949 the railroad still employed several hundred workers in Smithville. The town at this time had a dentist, two lawyers, three doctors, and six ministers and priests. By 1962 the population had dropped below 3,000, but it soon rose again. During the 19790s, the University of Texas M.D. Anderson Cancer Center established a Science Park in the piney woods just north of Smithville to conduct high quality groundbreaking research in the quest for cancer cures. The Smithville-Crawford Municipal Airport opened in 1971 and is continually being improved. Also, during this period, the town had a new library, a city hall, and a storm drainage system and received a statewide award for the best United States Bicentennial program. By 1984 the Smithville Times was still being published, and the town was a manufacturing and trading center with more than seventy rated businesses and an estimated population of 3,470. Local products included cedar cabins, fencing, furniture, and ship doors and components. Smithville also remained a center for farming and livestock raising. It was the site of an annual three-day festival, the Smithville Jamboree. (Video) (Video) In 1990 its population was 3,196. By 2000, the population had reached 3,901. 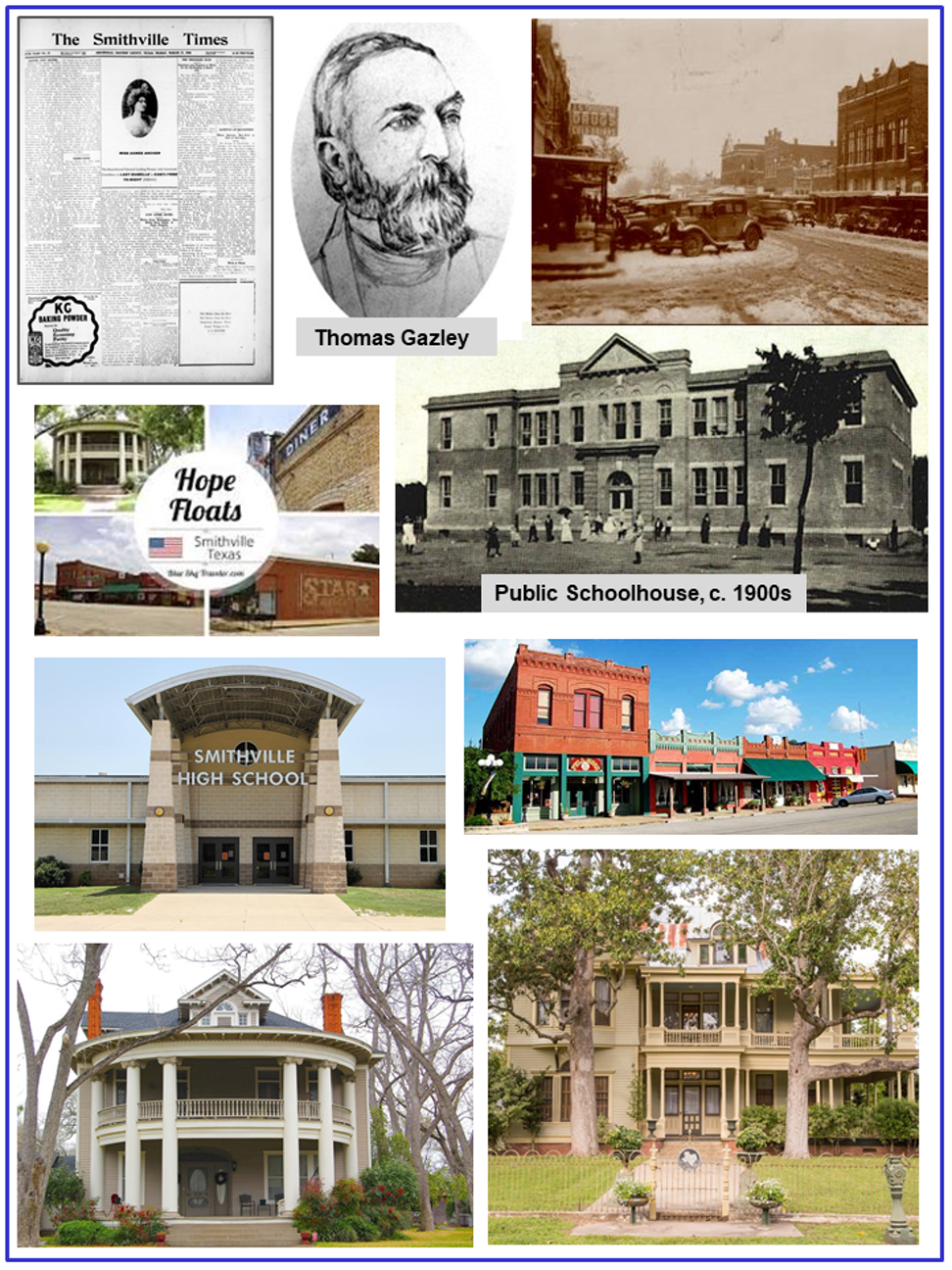