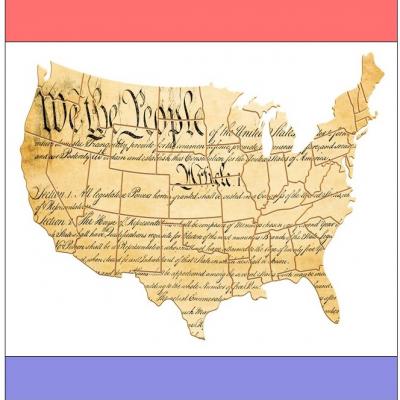 1925: First Female Governor of a U.S. State (Missouri]
Nellie Tayloe Ross, a Democrat, was the first woman to serve as governor of a state, January 5, 1925 to January 3, 1927. Upon the death of her husband, elected Governor in 1922, she succeeded him. As governor, she stressed the need for tax relief for farmers, and proposed legislation to require counties, school boards, and the state council to prepare budgets a publish them before levying any taxes. She also backed a measure designed to prevent bank failures while making examining officials responsible to the governor. She also served as two five-year terms as Director of the U.S. Mint, beginning May 3, 1933, the first woman to hold that position. [Source: https://www.nga.org/governor/nellie-tayloe-ross]

1927: Gong Lum v. Rice (275 U.S. 78)
The Supreme Court, applying the "separate but equal" formulation of Plessy v. Ferguson to the public schools, held that a Mississippi school district may require a Chinese-American girl to attend a segregated Black school rather than a White school. [Source: https://supreme.justia.com/cases/federal/us/275/78]

1947: The First Black Major League Baseball Player
On April 5, 1947, with the help and support of Brooklyn Dodger president Branch Rickey, Jackie Robinson took the field with the Dodgers. Rickey knew that Robinson was not necessarily the best pure ballplayer in the Negro Leagues, that would have been Josh Gibson, but he felt Robinson had greatest ability to perform under what would be difficult conditions. Rickey was proven correct—his career on the field was legendary and it opened the door for other Black athletes to get their chance. He was Rookie of the Year in 1947, National League MVP in 1949, a member of the World Series champions in 1955, and entered its Hall of Fame in 1962—his first year of edibility. [Source: https://americansall.org/legacy-story-individual/jack-robinson-1]

1948: Desegregation of the Armed Forces,  Executive Order 9981
On July 26, 1948, President Harry S Truman's Order abolished segregation in the armed forces and ordered full integration of all services. The Order stated that "there shall be equality of treatment and opportunity for all persons in the armed forces without regard to race, color, religion, or national origin." The order also established an advisory committee to examine the rules, practices, and procedures of the armed services and recommend ways to make desegregation a reality.
There was considerable resistance to the Order from the military, but by the end of the Korean conflict, almost all the military was integrated. Truman bolstered the civil rights division, and appointed William H. Hastie as the first African American judge to the Federal bench, serving on the U.S. Circuit Court of Appeals, the Third District, Philadelphia, PA. Truman also named several other African Americans to high-ranking administration positions. [Source: https://www.ourdocuments.gov/doc.php?flash=true&doc=84]

1952:  University of Alabama Integrates
Before Brown v. Board of Education, a young Black woman, Autherine Lucy, was accepted to the University of Alabama on September 11, 1952. Once the university realized she was Black, they told her state law did not allow her to attend. Thurgood Marshall and other lawyers worked with Lucy to sue the university. She took her case to the U.S. District Court and won the right to attend. After years of courtroom battles, the U.S. Supreme Court ruled in 1955 that Lucy could go to the University of Alabama.
In February 1956, a mob of people assembled on campus. They wanted to stop desegregation. They insulted Lucy, chanted racist slogans, threw eggs and threatened to kill her. She had to be escorted off campus in a police car. At the end of the day, university officials voted to suspend Lucy because they said that the campus was not safe for her. The angry protestors got their way and forced her out of school.
Thirty-two years later, she was asked to speak to a history class at the University of Alabama. After her talk, the teachers wanted her to be allowed to come back to the school as a student. In April of 1988, the university sent Lucy a letter saying that she was no longer suspended. She began school in 1989 and graduated from the same school at the same time as her daughter Grazia. Her legacy continues, as the University of Alabama named a $25,000 scholarship after her, and her picture was put up at the university in 1992. [Sources:
https://www.womenshistory.org/education-resources/biographies/autherine-lucy; ttp://www.americaslibrary.gov/aa/marshallthrgd/aa_marshallthrgd_lucy_3.html]

1954: Brown v. Board of Education (347 US 483)
Brown v. Board of Education was a group of five legal appeals that challenged the "separate but equal" basis for racial segregation in public schools in Kansas, Virginia, Delaware, South Carolina, and the District of Columbia. The appeals reached the Supreme Court about the same time, and because they all dealt with the same issues, the Court heard arguments on them together.
On May 17, 1954, U.S. Supreme Court Justice Earl Warren delivered the unanimous ruling in the landmark civil rights case Brown v. Board of Education of Topeka, Kansas. State-sanctioned segregation of public schools was a violation of the 14th amendment and was therefore unconstitutional. This historic decision marked the end of the "separate but equal" precedent set by the Supreme Court nearly 60 years earlier in Plessy v. Ferguson and served as a catalyst for the expanding civil rights movement during the decade of the 1950s. [Source: https://www.ourdocuments.gov/doc.php?flash=true&doc=87]

1955: Murder of Emmett Till
While visiting his relatives in Money, Mississippi, 14-year-old Emmett Till, and African American from Chicago, went to the Bryant store with his cousins, and may have whistled at Carolyn Bryant, a white woman who was a cashier at the store. Her husband, Roy Bryant, and brother-in-law, J.W. Milam, were enraged and, four days later,  kidnapped and brutally murdered Till, dumping his body in the Tallahatchie River. His murderers are acquitted on September 23 and the state failed to bring separate kidnapping charges against Bryant and Milam. This galvanized a generation of young African Americans to join the Civil Rights Movement out of fear that such an incident could happen to friends, family, or even themselves. [Source: https://www.loc.gov/collections/civil-rights-history-project/articles-and-essays/murder-of-emmett-till]

1955-56: Bus Boycott in Montgomery, Alabama
On December 1, 1955, Rosa Parks was arrested for refusing to give up her bus seat to a white man. At that time, the Montgomery NAACP had been looking for a test case to challenge the constitutionality of Alabama state bus segregation laws. To coincide with her trial on December 5, 1955, the Women’s Political Council initiated a one-day citywide bus boycott. That evening, E. D. Nixon and other Black leaders called a mass meeting at Holt Street Baptist Church and voted to extend the bus boycott under the direction of the newly formed Montgomery Improvement Association (MIA).
Rosa, who had been discharged from the Montgomery Fair department store, began setting up rides and garnering public support for the boycott and the NAACP. For 381 days, African American citizens of Montgomery walked, carpooled, and took taxis rather than city buses. They endured bad weather, harassment, intimidation, and the loss of their jobs. On November 13, the U.S. Supreme Court upheld the lower court’s ruling that bus segregation violated the due process and 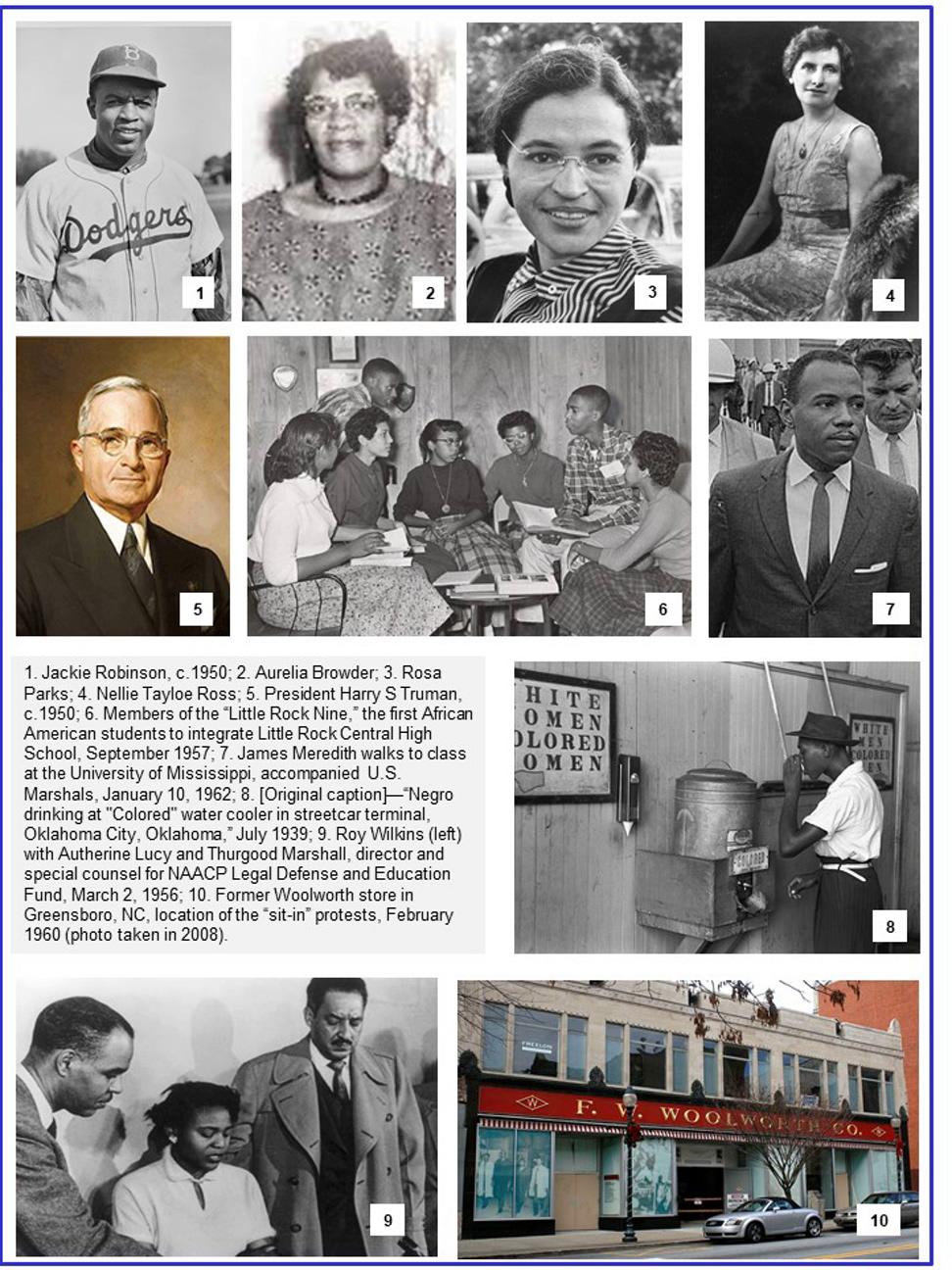