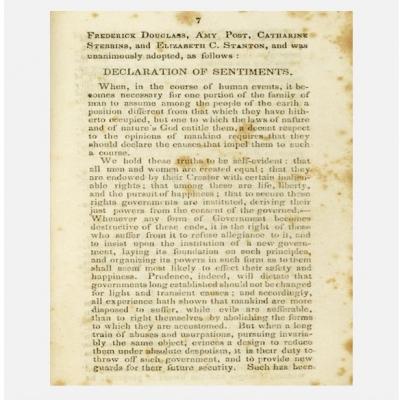 1874: Minor v. Happersett, 88 U.S. 162
On October 15, 1872, Virginia Minor [29] applied to register to vote in Missouri. The registrar, Reese Happersett, turned down the application, because the Missouri state constitution read: "Every male citizen of the United States shall be entitled to vote." Mrs. Minor sued in Missouri state court, claiming her rights were violated based on the Fourteenth Amendment. She argues that the 14th Amendment’s privileges and immunities clause must be interpreted to guarantee her a right to vote. However, the Supreme Court rules that while women are "persons" under the Fourteenth Amendment that they are a special category of "non-voting" citizens and that states remain free to grant or deny women the right to vote. [https://www.law.cornell.edu/supremecourt/text/88/162]

1874: Constitution of Pennsylvania is ratified
The Constitution (which goes into effect on January 1) replaces the words “white freeman” with “male citizens,” affirming the Fifteenth Amendment, but it continues to exclude women. [https://www.legis.state.pa.us/cfdocs/legis/LI/consCheck.cfm?txtType=HTM&ttl=00&div=0&chpt=1]

1874: Woman's Christian Temperance Union (WCTU)
Founded in Cleveland, Ohio, in November, the WCTU was a religious organization whose primary purpose was to combat the influence of alcohol on families. With Francis Willard [38] at its head (1876), the WCTU became an important proponent in the fight for woman suffrage. One of the strongest opponents to women's enfranchisement was the liquor lobby, which feared women might use their vote to prohibit the sale of liquor. [https://socialwelfare.library.vcu.edu/religious/womens-christian-temperance-union]

1874: Michigan votes on a woman suffrage referendum.
Both the House and Senate voted to submit a constitutional amendment enfranchising women to the voters via a separate one-issue ballot marked “Woman suffrage – Yes” or “Woman suffrage – No” in the 1874 election. Despite the best efforts of both local and state level volunteers, the proposed amendment to the constitution failed dramatically, with 40,077 "yes" votes and 135,957 "no" votes.  [https://www.michigan.gov/libraryofmichigan/0,9327,7-381-88854_89996-518343--,00.html]

1875: Women in Minnesota win the right to vote in school elections
[http://collections.mnhs.org/MNHistoryMagazine/articles/54/v54i07p290-303.pdf]

1876: Centennial Exposition
NWSA president, Elizabeth Cady Stanton [4] writes a Declaration and Protest of the Women of the United States to be read at the centennial celebration in Philadelphia to commemorate the 100th anniversary of the signing of the Declaration of Independence. This was the first “World’s Fair” to be held in the U.S. When the request to present the Declaration is denied, Susan Anthony and four other women charge the speakers’ rostrum and thrust the document into the hands of president pro tem of the Senate, Thomas W. Ferry. [https://kywnewsradio.radio.com/articles/feature-article/women-declared-their-rights-at-1876-centennial-exhibition]

1878: Suffrage appeal to the U.S. Senate
A federal amendment to grant women the right to vote is introduced for the first time by Senator Aaron A. Sargent of California (S.Res. 12). "The right of citizens of the United States to vote shall not be denied or abridged by the United States or by any State on account of sex." The Senate refers the so-called Susan B. Anthony [16] Amendment to the Committee on Privileges and Elections. The following day, suffragists testify for the first time before senators on the issue of woman suffrage. However, after reviewing 30,000 petitions requesting a woman suffrage amendment, the Committee recommends that consideration of the issue be "indefinitely postponed." Undaunted, Anthony continues to appear before every Congress from 1869 to 1906 to ask for passage of a voting rights amendment. When the 19th Amendment passes forty-one years later, it is worded the same as this 1878 Amendment. [https://faculty.arts.ubc.ca/mchapman/by_students/mckinney/susan_b.htm]

1878: New Hampshire approves school suffrage for women.
Women in New Hampshire became eligible to serve on school committees in 1871 and won the right to vote in school elections in 1878. In 1887, a bill was introduced in the legislature to enfranchise women in municipal elections, but it was defeated. [https://www.nps.gov/articles/new-hampshire-and-the-19th-amendment.htm]

1878: Oregon suffrage
An 1878 statute provided that citizens who had property, who were older than twenty-one, and who had lived thirty days or more in the district “upon which he or she pays a tax” could cast a vote in school elections. However, many Oregon women continued to be excluded from voting because of legal barriers to holding property based on race and ethnicity; others were excluded based on economic status [https://oregonencyclopedia.org/articles/woman_suffrage_in_oregon]

1879: First woman lawyer to practice before the U.S. Supreme Court
Belva Ann Bennett Lockwood [34] became the first woman attorney admitted to practice before the Court. She ran for president in 1884 and 1888 on the ticket of the National Equal Rights Party and was the first woman to appear on official ballots. While Victoria Woodhull [32] is commonly cited as the first woman to run for president, she was not old enough to run, unlike Lockwood. [https://www.archives.gov/publications/prologue/2005/spring/belva-lockwood-1.html]

1880: Women vote in Syracuse, NY
On February 18, thirteen women register and vote, the first-time women had legally voted in the state since 1777. [https://thehistorycenter.net/resources/Documents/Digital%20Exhibits/updated_timeline_in_securing_woman_suffrage_in_nys.pdf]