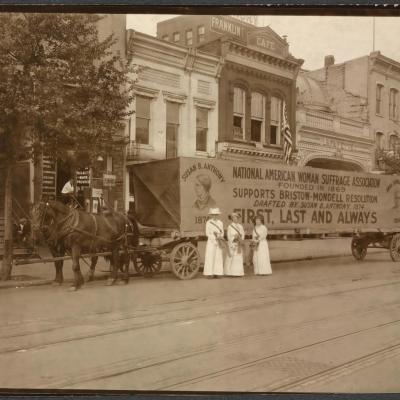 1888: International Council for Women (ICW)
ICW holds its first meeting in Washington D.C., which coincided with the establishment of the first national council, the National Committee of the United States. Founding members included Susan B. Anthony [16], May Wright Sewall [42] and Frances Willard [38], among others. Fifty-three women’s organizations from nine countries were represented at the first gathering. ICW aims to bring together women’s organizations from all countries. The goal is to promote human rights, equality, peace and women’s involvement in all spheres of life through the establishment of an international federation, or umbrella organization, of National Councils. Only one council is admitted for each country. [http://www.icw-cif.com/01/03.php]

1888: Brown v. Phillips (71 Wis 239)
Olympia Brown [43], the most prominent early leader of the women’s rights movement in Wisconsin and one of the first female ministers in the U.S., attempted to vote in the 1887 Racine municipal election. She was turned away and sued. The Wisconsin Supreme Court declined to expand women’s suffrage, reversing the Racine County Circuit Court, narrowly interpreting a state statute which gave women the right to vote only on school-related matters. In the opinion, the Court emphasized that the power to grant suffrage belonged to the Legislature. [https://www.wicourts.gov/courts/supreme/docs/famouscases10.pdf]

1889: First state to allow woman to vote
On September 30, the Wyoming state convention approves a constitution that includes a provision granting women the right to vote. Formally admitted into the union the following year, Wyoming thus became the first state in the history of the nation to allow its female citizens to vote. [https://www.history.com/this-day-in-history/wyoming-legislators-write-the-first-state-constitution-to-grant-women-the-vote]

1890: The Remonstrance
The Massachusetts Association Opposed to the Further Extension of Suffrage to Women launched The Remonstrance as a digest of local, national, and international anti-suffrage news and strategic planning. [https://www.loc.gov/resource/rbcmil.scrp5011101/?st=gallery]

1891: New Mexico suffrage
New Mexico was unusual among western states in not giving women suffrage in their original constitution. Even so, as the fight for women’s suffrage swept across the nation, New Mexico and New Mexicans became an important part in finally achieving the vote. [https://libomeka.unm.edu/exhibits/show/aysp/women-suffrage-in-new-mexico]

1891: Illinois suffrage
On June 19, Governor Joseph Wilson Fifer signed bill into law. This law was the first in Illinois that allowed women to vote in school elections. Because this legislation limited which elections women could vote in, it meant that women had to use separate ballots than men when voting. [https://www.cyberdriveillinois.com/departments/archives/online_exhibits/100_documents/1891-women-sufferage-school-elect.html]

1891: Anti-lynching campaign
Ida B. Wells-Barnett [44] was an African American journalist, abolitionist and feminist who led an anti-lynching crusade in the United States in the 1890s. She went on to found and become an important force in groups striving for African American justice, such as the Afro-American League (AAL) and the National Equal Rights Council (NERC). [https://www.biography.com/activist/ida-b-wells]

1893: Colorado suffrage
On November 7, a referendum on women's suffrage, led by Carrie Chapman Catt [45], was held in Colorado that granted women the right to vote "in the same manner in all respects as male persons are."  Subsequently, Colorado became the first American state to enact women's suffrage by popular referendum. [https://coloradoencyclopedia.org/article/womens-suffrage-movement]

1893: National Council of Jewish Women (NCJW)
After attending a meeting of the Jewish Women’s Congress at the Columbian Exposition, Hannah Greenbaum Solomon [50] founds the (NCJW). It is a grassroots organization of volunteers and advocates who turn progressive ideals into action and are inspired by Jewish values. [https://www.ncjw.org/about]

1894: Iowa suffrage
Iowa women win limited suffrage in 1894. They were able to vote on ballot questions regarding bond or tax issues but not for candidates.
[https://ir.uiowa.edu/cgi/viewcontent.cgi?article=1350&context=honors_theses]

1895: The Woman’s Bible
This is a two-part non-fiction book, written by Elizabeth Cady Stanton and a committee of 26 women, published in 1895 and 1898 to challenge the traditional position of religious orthodoxy that woman should be subservient to man. The book attracted a great deal of controversy and antagonism at its introduction and is censured by the NAWSA. [https://en.wikipedia.org/wiki/The_Woman%27s_Bible] 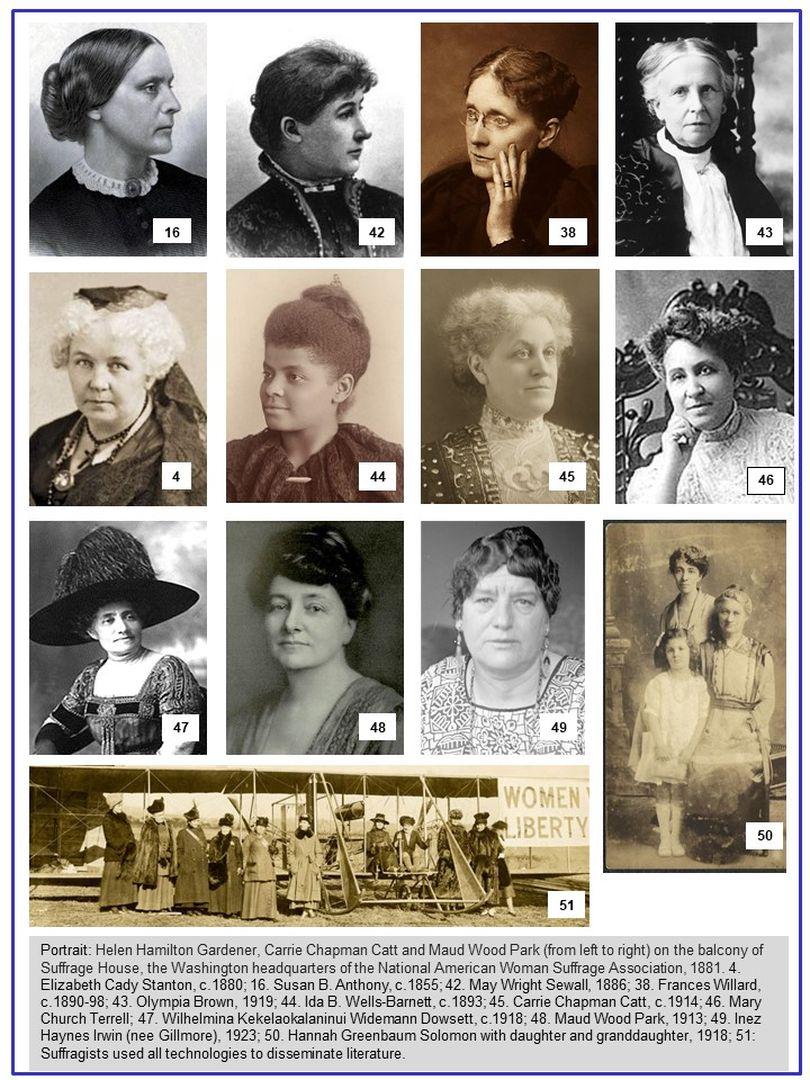