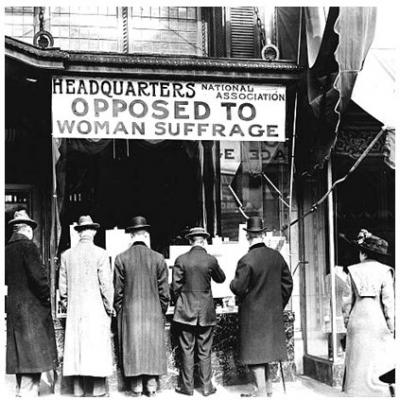 1903: New Hampshire Question 7, Women's Suffrage Amendment
On a March 10 referendum, voters in New Hampshire defeat a woman suffrage amendment to the state’s constitution by a margin of 2:1. [https://ballotpedia.org/New_Hampshire_Question_7,_Women%27s_Suffrage_Amendment_(March_1903)]

1903: Women's Trade Union League (WTUL)
The annual convention of the American Federation of Labor (AFL) met in Boston. In the early 1900's, women were viewed and treated as second-class citizens. Since they were not allowed to vote, many felt their opinions and safety did not count. Therefore, they were banned from joining the AFL meeting. So, the only reasonable response was to create a separate trade union that fought for women's rights. And the WTUL was born to argue for woman suffrage as a means of improving working conditions. They also work to secure better occupational conditions and improved wages for women as well as to encourage women to join the labor movement. [https://study.com/academy/lesson/womens-trade-union-league-definition-overview.html]

1904: Women's Trade Union League of New York (WTULNY)
This was one of three original local leagues established following the formation of the WTUL in 1903. The WTULNY was founded by William English Walling and Mary Kenney O'Sullivan, who worked to recruit Margaret and Mary Dreier, Leonora O'Reilly, Pauline Newman, Clara Lemlich, Alice Bean, and Hilda Svenson, among others. This was an organization of middle- and working-class women dedicated to unionization for working women and to woman suffrage. [https://nyassembly.gov/member_files/058/20090226]

1904: International Women Suffrage Alliance (IAW)
Originally founded as the International Council of Women, its basic principle is that the full and equal enjoyment of human rights is due to all women and girls. Its first president was Carrie Chapman Catt [45].  [https://womenalliance.org/what-is-iaw]

1906: Oregon suffrage
The Oregon Equal Suffrage Association was able to secure a constitutional amendment for equal suffrage on Oregon's ballots in 1884, 1900, 1906, 1908, 1910, and 1912. With the state amendment for equal suffrage on the ballot, men in Oregon were able to vote on whether to recognize women's suffrage rights. This year, it fails with only 44% support. [https://ballotpedia.org/Oregon_Measure_2,_Women%27s_Suffrage_Amendment_(June_1906)]

1907: Oklahoma suffrage
The Oklahoma Constitutional Convention meets prior to Oklahoma Territory becoming a state. In the new state constitution, despite decades of organizing, women were granted the right to vote in school elections only. It becomes law in 1907. [https://www.nps.gov/articles/oklahoma-and-the-19th-amendment.htm]

1907: Expatriation Act becomes law
If an American woman married a foreigner before 1907 and the married couple continued to reside in the United States, she did not cease to be a U.S. citizen. Effective March 2, the law changed. Congress mandated that “any American woman who marries a foreigner shall take the nationality of her husband.” Upon marriage, regardless of where the couple resided, the woman’s legal identity morphed into her husbands. There is no corresponding loss of citizenship when an American man marries a foreign woman. [https://www.archives.gov/files/publications/prologue/2014/spring/citizenship.pdf]

1907: Oklahoma woman suffrage
On November 16, Oklahoma becomes a state, and in its Constitution, women receive the right to vote in school elections only. [https://ojs.library.okstate.edu/osu/index.php/OKPolitics/article/viewFile/1048/945]

1908: International Women's Day (IWD)
IWD (March 8) is a global day celebrating the social, economic, cultural and political achievements of women. The day also marks a call to action for accelerating gender parity. No one government, NGO, charity, corporation, academic institution, women's network or media hub is solely responsible for IWD. It is a collective day of global celebration and a call for gender parity. [https://www.internationalwomensday.com/About]

1908: Suffragists lobby in the Marble Room
Dozens of suffragists, including spouses and daughters of members of Congress, lobby senators in the Marble Room, a meeting space near the Senate Chamber. Their presence in the Capitol had become an annual tradition, organized in conjunction with the yearly meeting of  NAWSA in Washington, D.C. [https://www.senate.gov/artandhistory/history/People/Women/Nineteenth_Amendment_Vertical_Timeline.htm]

1908: First official suffrage march
The march, held in Oakland, CA. on August 27, is co-led by Johanna Pinther, her step-daughter-in-law Jeanette Pinther and Lillian Harris Coffin [48]. Joined by 300 women, they carried the banner for the California Equal Suffrage Association hand-sewn and embroidered by Johanna. The women marched nearly a mile to the site of the California State Republican Convention to demand suffrage be added to the Republican platform (state Democratic and Labor parties had already done so). California Republicans would not do so until their next state convention in 1909. [https://glenparkhistory.wixsite.com/glenparkhistory/glen-park-and-the-first-suffrage-ma]

1908: First street parade
In February, the first street parade for women suffrage in the United States was organized by the Harlem Equal Rights League. Gradually street meetings and parades became the fashion not only in New York but through the country. [https://www.nps.gov/articles/maud-malone-the-new-york-city-suffrage-parade-of-1908.htm] 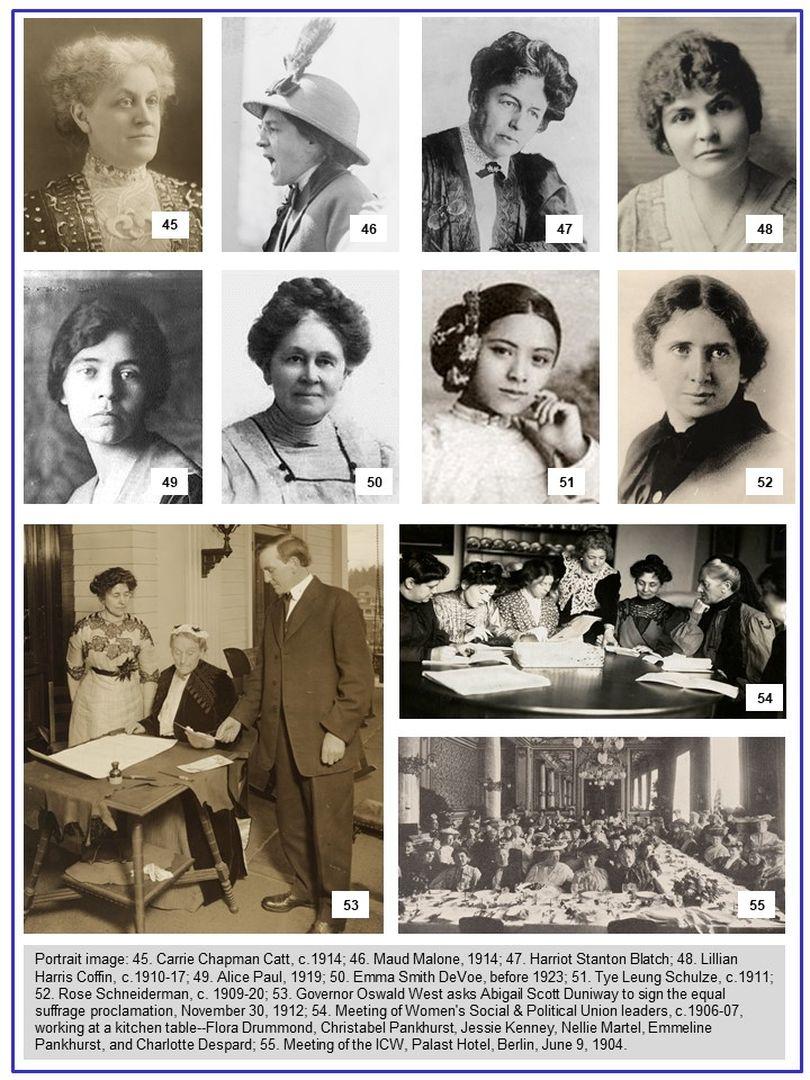