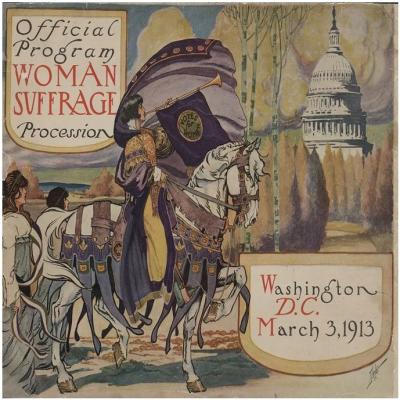 1913: Congressional Union for Women Suffrage (CUWS or CU)
Led by Alice Paul [49] and Lucy Burns [56], CUWS was formed to campaign for a constitutional amendment guaranteeing women's suffrage. It attempted to introduce the militant methods used by the Women's Social and Political Union in Britain, and controversial tactics included organizing huge demonstrations and the daily picketing of the White House. Over the next few years, the police arrested nearly 500 women for loitering and 168 were jailed for "obstructing traffic". In 1916 CUWS becomes the National Woman's Party. [https://www.loc.gov/collections/women-of-protest/articles-and-essays/historical-overview-of-the-national-womans-party]

1913: Illinois suffrage
Illinois grants women the right to vote for president but not for legislators on both the state and federal level. [https://www.cyberdriveillinois.com/departments/archives/online_exhibits/100_documents/1913-il-suffarge-act.html]

1913: Woman suffrage procession (parade) in Washington, D.C.
At the first national woman suffrage parade held in Washington, D.C. on March 3, organized by Alice Paul, spectators assault marching suffragists. The parade is attacked by a mob, and hundreds of women are injured but no arrests are made. A subsequent Senate investigation of the incidents of that day, which draws upon dozens of eyewitness accounts, concludes that “uniformed and…special police acted with more or less indifference while on duty.” [https://www.senate.gov/artandhistory/history/People/Women/Nineteenth_Amendment_Vertical_Timeline.htm]

1913: Testimony before U.S. Senate Committee
On June 24, Belle Case La Follette [58] , prominent suffragist and spouse of Senator Robert Chester La Follette (R-WI), testifies before the Senate Committee on Woman Suffrage in support of the constitutional amendment. “Ours is a government of the people by the people and for the people. And are not women people?” [https://www.senate.gov/artandhistory/history/People/Women/Nineteenth_Amendment_Vertical_Timeline.htm]

1913: Petitions to the U.S. Senate
On July 31, in a carefully orchestrated event, suffragists deliver petitions with more than 75,000 signatures to senators. Suffragists call it the "Siege of the Senate." When the Senate convenes that afternoon, senators formally submit the petitions for committee referral. [https://www.senate.gov/artandhistory/history/People/Women/Nineteenth_Amendment_Vertical_Timeline.htm]

1914: U.S. Senate vote on women suffrage
For the second time in its history, the Senate holds a vote on a constitutional amendment to extend suffrage to women. The measure falls 11 votes short of the constitutionally required two-thirds of senators present and voting, 35-34. [https://www.senate.gov/artandhistory/history/People/Women/Nineteenth_Amendment_Vertical_Timeline.htm]

1914: Election tactics
The CUWS alienates leaders of the National American Woman Suffrage Association by campaigning against anti-suffrage Democrats in the congressional elections. [https://www.loc.gov/static/collections/women-of-protest/images/tactics.pdf]

1914: National Federation of Women’s Clubs
With more than two million women members throughout the U.S., they formally endorse the suffrage campaign. [https://suffragistmemorial.org/gfwc-and-suffrage]

1914: U.S. Senate vote
In March 19, the Senate votes for first time since 1887 on federal woman suffrage amendment. The Bill is defeated. [https://www.loc.gov/collections/women-of-protest/articles-and-essays/historial-timeline-of-the-national-womans-party/1912-to-1914]

1915: Puck magazine
The satirical magazine Puck [62] was one of the most influential American publications of the late 19th and early 20th centuries. Making liberal use of cartoons and drawings, Puck gave its readers an irreverent mix of current events, pointed social commentary, political opinion, and often-scathing criticism of the day’s prominent figures. Although in earlier years Puck had ridiculed the idea of women’s enfranchisement, the magazine took the opposite tack with its February 20 “Suffrage Number.” [http://suffrageandthemedia.org/source/puck-magazine-suffrage-issue]

1915: Vernon and Field Tour
Suffragist, pacifist, and a national leader in the U.S. suffrage movement, Mabel Vernon [59], and poet, suffragist, Georgist, and Christian socialist Sara Bard Field, are involved in a transcontinental tour which gathers over a half-million signatures on petitions to Congress. They were trying to gain support for women in the East. Twelve Western states had already granted women the right to vote in state elections. [https://suffragistmemorial.org/mabel-vernon-1883-1975]

1915: New York City parade (Mother's March)
On October 23, more than 25,000 women march in a suffrage parade, the largest held at that time in the city. Many women are dressed in white and carry placards with the names of the states they represent. They were opposed by The New York Times, which ran an article warning that if women get the vote, they will “play havoc for themselves and society,” and that “granted the suffrage, they would demand all the rights that implies. It is not possible to think of women as soldiers and sailors, police patrolmen, or firemen” Heavens, think of the chaos! [http://behindthescenes.nyhistory.org/1915-women-march-suffrage] 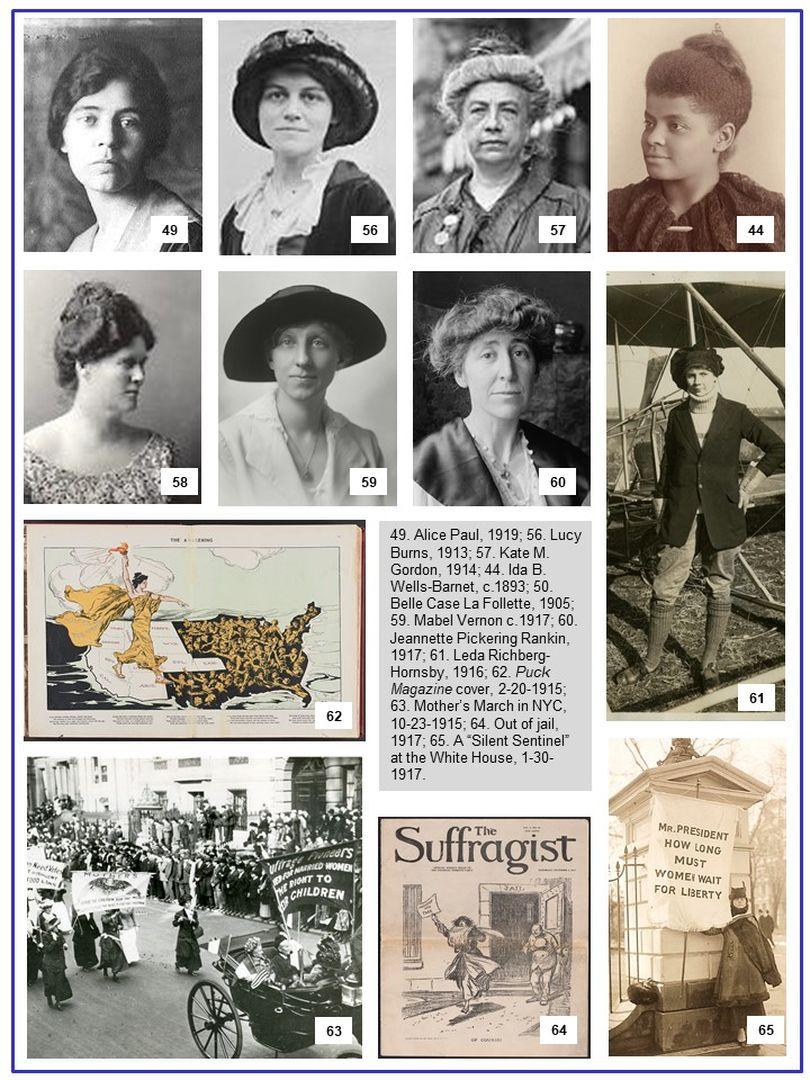