Alice Paul was the architect of some of the most outstanding political achievements on behalf of women in the 20th century. Born  to Quaker parents in Mt. Laurel, New Jersey, Alice Paul dedicated her life to the single cause of securing equal rights for all women. Few individuals have had as much impact on American history as has Alice Paul. Her life symbolizes the long struggle for justice in the United States and around the world. Her vision was the ordinary notion that women and men should be equal partners in society.

William and Tacie Paul married in 1881 and moved into Paulsdale in 1883. Two years later, their first child, Alice, was born, followed by William in 1886, Helen in 1889 and Parry in 1895. Alice’s father was a successful businessman and, as the president of the Burlington County Trust Company in Moorestown, NJ, earned a comfortable living.  His economic success allowed Paulsdale to become a gentleman’s farm; family members may have had some farm chores, but hired hands actually provided a majority of the labor. Alice’s life on the “home farm” (as she referred to her home) marked her early childhood and is reflected in her work as an adult. As Hicksite Quakers, Alice’s parents raised her with a belief in gender equality, and the need to work for the betterment of society. They stressed separation from the burgeoning materialistic society and advocated the benefits of staying close to nature. Paulsdale reflected this ideal; the 265-acre farm was situated away from the town, isolated but not closed to society.

Despite their relative wealth and in accordance with Quaker practice, the Pauls lived very simply. Alice and her siblings likely had many domestic and agricultural responsibilities instilling the values of industry and perseverance; two lessons critical for her later success. Though it followed Quaker designs for simplicity, Paulsdale boasted many comforts. The house was large and spacious, possessing indoor plumbing, electricity and a telephone by the early twentieth century. A wraparound porch overlooked the farmyard complete with a barn, hen house, icehouse, and several peach orchards. Irish maids and hired hands carried out the most arduous work, allowing Alice and her siblings to enjoy leisure activities, such as playing tennis at Paulsdale’s own court or sitting under the shade of the massive Copper Beech tree watching the goldfish in the pond. Alice was an excellent student, a voracious reader, and played several extracurricular sports in school including basketball, baseball and field hockey.

The most enduring legacy of Paulsdale was its role in the suffrage movement and the resulting influence it had upon Alice. Alice’s suffrage ideas were planted early as Tacie, who as a member of the National American Woman Suffrage Association (NAWSA), attended women suffrage meetings– often with Alice in tow. Tacie may have also held meetings at Paulsdale or entertained members afterwards. It was at Paulsdale, Paul noted years later, that she was first introduced to the suffrage movement.

When a Newsweek interviewer asked Paul why she dedicated the whole of her life to women’s equality, she credited her farm upbringing by quoting an adage she learned from her mother, “When you put your hand to the plow, you can’t put it down until you get to the end of the row.”

Raised in an area founded by her Quaker ancestors, Alice and her family remained devoted observers of the faith. As Hicksite Friends, the Paul family adhered to Quaker traditions of simplicity and plain speech (replacing you and yours with “thee” and “thy” when talking with other Quakers). Alice attended a Hicksite school in Moorestown, New Jersey, and graduated first in her class in 1901. Hicksite Friends endorsed the concept of gender equality as a central tenet of their religion and a societal norm of Quaker life. As Paul noted years later, “When the Quakers were founded…one of their principles was and is equality of the sexes. So I never had any other idea…the principle was always there.” Growing up among Quakers, who believed men and women were equal, meant Alice’s childhood environment was something of an anomaly for the time period. This upbringing undoubtedly accounts for the many Quaker suffragists including Susan B. Anthony and Lucretia Mott, both whom Paul admired and considered role-models. Alice’s faith not only established the foundation for her belief in equality but also provided a rich legacy of activism and service to country.

Alice’s relationship to Swarthmore College began long before she entered as a student in 1901. Her grandfather, Judge William Parry, was one of the founders of the co-educational school in 1864. He believed in the idea that men and women should receive an equal, Quaker-inspired education and he sent his youngest and only daughter Tacie to Swarthmore in 1878.

Unfortunately, Tacie Parry had to drop out in 1881, one year short of graduation, when she married William Paul (married women were not allowed to attend school). Tacie promised that her children would attend Swarthmore for at least one year to experience the value of a Quaker education. Though each of her four children took classes at the college, it was her eldest daughter Alice who stayed for four years graduating with a degree in Biology. At Swarthmore, Alice was taught by some of the leading female academics of the day, including mathematics professor Susan Jane Cunningham, who was one of the first women to be admitted to the American Mathematics Association. Cunningham, was noted on campus for her admonition, “Use thy gumption”. These words may have emboldened Paul when she picketed the White House and went on hunger strike. While in college, she used her “gumption” to participate in a variety of sports including field hockey, tennis and basketball.

She was a member of the Executive Board of Student Government, was named Ivy Poetess and served as a commencement speaker. Alice’s father, William Paul (who died unexpectedly during her second year at Swarthmore), once said of her, “Well, when there is a job to be done, I bank on Alice”. He spoke these words while Paul was still in college and they provide a hint to Paul’s character even before the age of 21. In the college’s yearbook, Halcyon, she was dubbed, “An open-hearted maiden, true and pure”. When this open hearted, open minded student graduated from Swarthmore in 1905, she may not have known what lay ahead, but she did expect to make a contribution to society.

Though Alice’s upbringing was steeped in suffrage ideals, it was during her stay in England that she was transformed from a reserved Quaker girl into a militant suffragist. After working in the settlement movement in New York, Paul left for Birmingham, England, in 1907 to study social work at the Woodbrooke Settlement. One day, she passed a crowd jeering a female speaker and stopped to observe the chaos. The woman, who had been speaking about women’s suffrage, was jeered so loudly she couldn’t be heard and was forced from the stage by an unruly crowd. Alice introduced herself to the speaker, who turned out to be Christabel Pankhurst, daughter of England’s most radical suffragette, Emmeline Pankhurst. The Pankhurst women (mother and two daughters) were leaders of a militant faction of suffragettes whose motto was “Deeds not words.” Believing that prayer, petitions, and patience was not enough to successfully enfranchise women, the Pankhurst's engaged in direct and visible measures, such as heckling, window smashing, and rock throwing, to raise public aware about the suffrage issue. Their notoriety gained them front-page coverage on many London newspapers, where they were seen being carried away in handcuffs by the police. 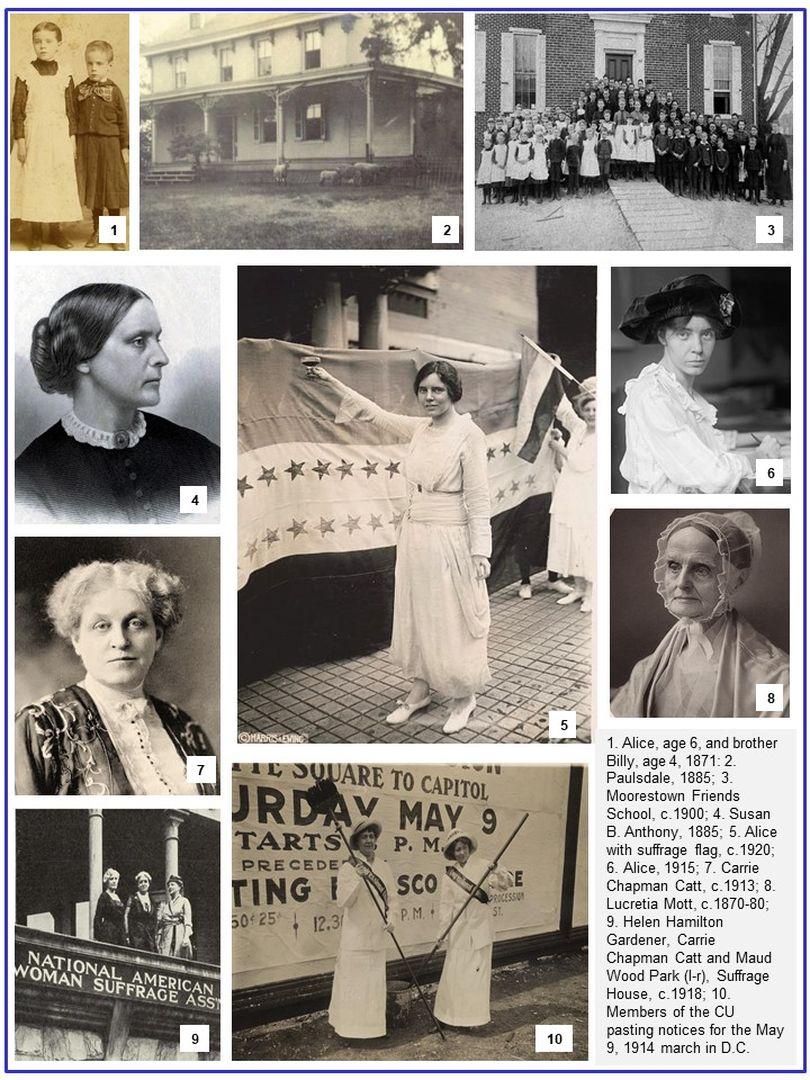