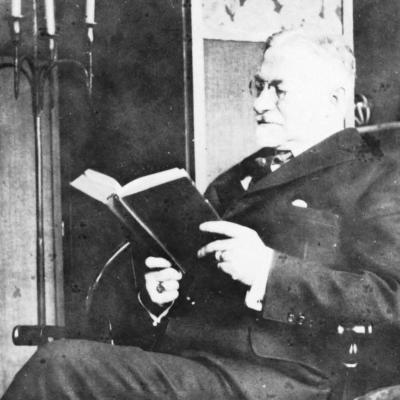 Augustus Sherman worked as a registry clerk with the Immigration Division of Ellis Island from 1892 until his death in 1925. Not much is known about his private life. He was born in Pennsylvania in 1866 and came to New York in 1892 to begin working at Ellis Island. He was responsible for registering immigrants, which he did at the examination desk and, though he did his job extremely well, he was never promoted to inspector. He was described by his colleagues as being “very well dressed and mannerly” and also as being “full of fun and mischief.” A dedicated bachelor, he cherished the children of his close friends, who remember him fondly as "Uncle Gussie.”

Dock workers at Ellis Island knew that one of the first things newly arriving immigrants did when they arrived at Battery Park, at the tip of Manhattan, was to discard their old clothing, exchanging them for New World garments. This was at the insistence of their recently assimilated relatives, who felt that looking foreign by wearing strange clothing was not a good way to begin life in their new country.

Gus Sherman knew this as well and wanted to capture the immigrants in photographs before the changes began. His was a simple request to the staff who worked in the building where the immigrants were processed: “If you see an interesting face, an arresting costume, contact Gus Sherman immediately!” There could never be too many to photograph or anything too strange or exotic to capture on plate.

Sherman’s photographs, which were used not only in official government reports but also in articles in National Geographic, provide a hint of the man. A sense of curiosity kept him interested in taking pictures of immigrants for more than 25 years. His photographs are very moving. The hopes, fears, aspirations and anxieties of the immigrants can be seen in their eyes. They had nothing to return to if rejected. Their old world was changing rapidly because of war, famine and annexation. The new world was forging ahead. Immigrants were caught in the middle. Sherman captured these people as they would never look again and as they might want to forget they had ever looked.

Like Emma Lazarus, whose poem did not gain significance until her death,  his photographs—almost forgotten after his death—became public in 1969 when they were gifted to the National Park Service by his niece, Mary Sherman Peters. It did not take long to recognize the historical significance of the collection. His photographs illustrated the elaborate national costumes and folk dresses of the new arrivals and showed the variety and richness of the ethnic and cultural heritages that came to form this nation.