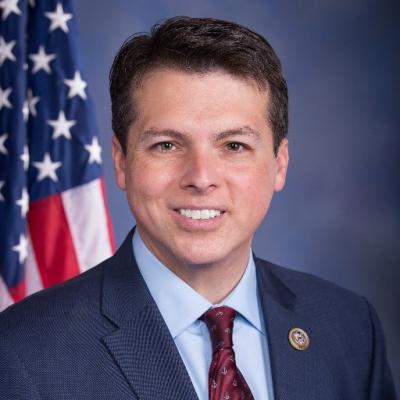 Brendan Francis Boyle, born February 6, 1977 in the Olney neighborhood of Philadelphia, PA, is a Democratic member of the U.S House of Representatives. representing, since 2019, Pennsylvania's 2nd Congressional District. This district includes most of the northeastern fourth of Philadelphia. From 2015-19, he represented the 13th district. Prior to that, he was a member of the PA House of Representatives, representing the 170th District from 2009-15, being an active supporter of public school funding, transportation and organized labor among other important issues.

Brendan’s father, Francis (“Frank”), is an Irish immigrant who, at age 19, came to the U.S. in 1970 from Glencolmcille, County Donegal, and worked as a maintenance custodian for the Southeastern Pennsylvania Transportation Authority (SEPTA). His late mother, Eileen, a child of Irish immigrants from County Sligo, worked as a Philadelphia School District crossing guard for over 20 years. His younger brother, Kevin J. Boyle serves as a representative of Pennsylvania's 172nd House District, having been elected in 2010 by defeating former Speaker of the House John M. Perzel. Brendan and Kevin were the first brothers to serve simultaneously in the Pennsylvania House.

Brenden attended Cardinal Dougherty High School and became the first in his family to attend college, receiving an academic scholarship to the University of Notre Dame where he graduated, in 1999, with a degree in Government, completing the Hesburgh Program in Public Service. After working for several years as a consultant with the U.S. Department of Defense, including Naval Sea Systems Command, he attended graduate school at Harvard University’s John F. Kennedy School of Government, earning a master's degree in Public Policy.

In August 2008, he was named "one of top 10 rising stars" in politics by the Philadelphia Daily News. In 2011, the Aspen Institute chose him as one of its Rodel Fellows, a program that "seeks to enhance our democracy by identifying and bringing together the nation's most promising young political leaders." In 2013, he was selected as the Pennsylvania School Counselor Association's "Legislator of the Year" award for his introduction of legislation to expand school counselor access in Pennsylvania. He also served as a part-time faculty member at Drexel University's Center for Public Policy, teaching courses in policy and campaign management.

Brendan has been active in the political arena since 2004, when he ran unsuccessfully for the Pennsylvania House of Representatives (and again in 2006), losing both times to longtime Republican incumbent George T. Kenney. Undaunted by these setbacks, he continued to remain active and build support, and on November 4, 2008, defeated Republican Matthew Taubenberger by a margin of 59.2 percent to 40.8 percent. On November 2, 2010, He won re-election, defeating Republican Marc Collazzo by a margin of 64 percent to 36 percent. Brendan was the first Democrat ever elected to represent the 170th district.

In 2012, he was unopposed and was selected as Chairman of the Pennsylvania House Democratic Campaign Committee, the campaign arm of the Pennsylvania House Democratic Caucus. In 2014, he won reelection with 67 percent of the vote. However, on January 2, 2015, he resigned his seat prior to being sworn in as a member of the U.S House of Representatives. He was succeeded by Martina White.

In February 2018, the Supreme Court of Pennsylvania imposed a new map for Pennsylvania's congressional districts. Brandan announced that he would run for re-election in the new 2nd District, previously called the 1st District, represented by retiring fellow Democrat Bob Brady. However, the new 2nd absorbed all the Philadelphia portions of the old 13th, including Boyle's home.

As a state lawmaker, his focus was on greater educational access, healthcare and economic equality. As the first member of his family to attend college, he prioritized greater access to higher education. During his first term in office, he introduced the REACH Scholarship program, which would offer tuition-free public college for qualifying Pennsylvania students.

He fought cuts to public K–12 and higher education funding, and supported greater investment in infrastructure, voting in 2013 for legislation (passed into law as Act 89) that provided the first comprehensive transportation funding overhaul in Pennsylvania in nearly 20 years. It provided several billion dollars in new funds for roads, bridges and mass transit. He also founded the Eastern Montgomery County-Northeast Philadelphia Legislative Alliance, a group of local and state lawmakers who work across Northeast Philadelphia and Montgomery County on issues affecting both regions.

Brandan was a founding member of the LGBT Equality Caucus, and during his first term in office, he voted in favor of the legislation prohibiting discrimination of LGBT Pennsylvanians in work, housing and other areas—the only time it passed out of committee. In 2014, he introduced legislation to amend Pennsylvania's hate crimes statutes to include crimes perpetrated based on sexual orientation.

He also introduced legislation in 2011 to make genocide education a required part of Pennsylvania public school curricula, legislation that was eventually passed into law in 2014. In 2013, he introduced legislation to expand access to school counseling services, which resulted in him being selected as the recipient of the 2013 Pennsylvania School Counselor Association's "Legislator of the Year" award. In 2014, he introduced the SAFER PA Act, which required timely testing of DNA evidence kits and that backlogged and untested evidence be reported to the state. It would also require that authorities notify victims or surviving family when DNA testing is completed. The SAFER PA Act was reintroduced and signed into law by Governor Tom Wolf in 2015.

As a member of Congress, Brandan has prioritized legislative measures to address national income inequality, while expanding access to healthcare and education. He has supported legislation to raise the federal minimum wage to $12.00 an hour, as well as measures to revise the way Social Security benefits are calculated to protect seniors from seeing their benefits reduced over time.

He has been outspoken about the need to protect American jobs. After Mondelez International announced that it would close a Philadelphia factory, he announced his support for the Oreo Boycott by appearing with a poster featuring an Oreo cookie red circle and line through it, accompanied by the message, "Say no to Oreo," After highlighting the American layoffs, he noted that CEO Irene Rosenfeld received a pay increase.

Brendan filed the Standardizing Testing and Accountability Before Large Elections Giving Electors Necessary Information for Unobstructed Selection Act, or shortened to the acronym Stable Genius Act, in 2018. The measure would imply "nominees of each political party to file a report with the Federal Election Commission certifying that he or she underwent a medical exam by the Secretary of the Navy"—containing the exam's results.

He is also the sponsor of H.R. 6094, which prohibits lifting of U.S. sanctions imposed with respect to North Korea. On education, which remains one of his top priorities, he joined other Members of Congress to urge House leaders to get federal money to Philadelphia's ailing schools. He is a member on the Ways and Means Committee and well as the Budget Committee. He serves as a founding co-chair to the Blue Collar Caucus where the congressman works on legislation to address wage stagnation, job insecurity, trade, and many other important issues. 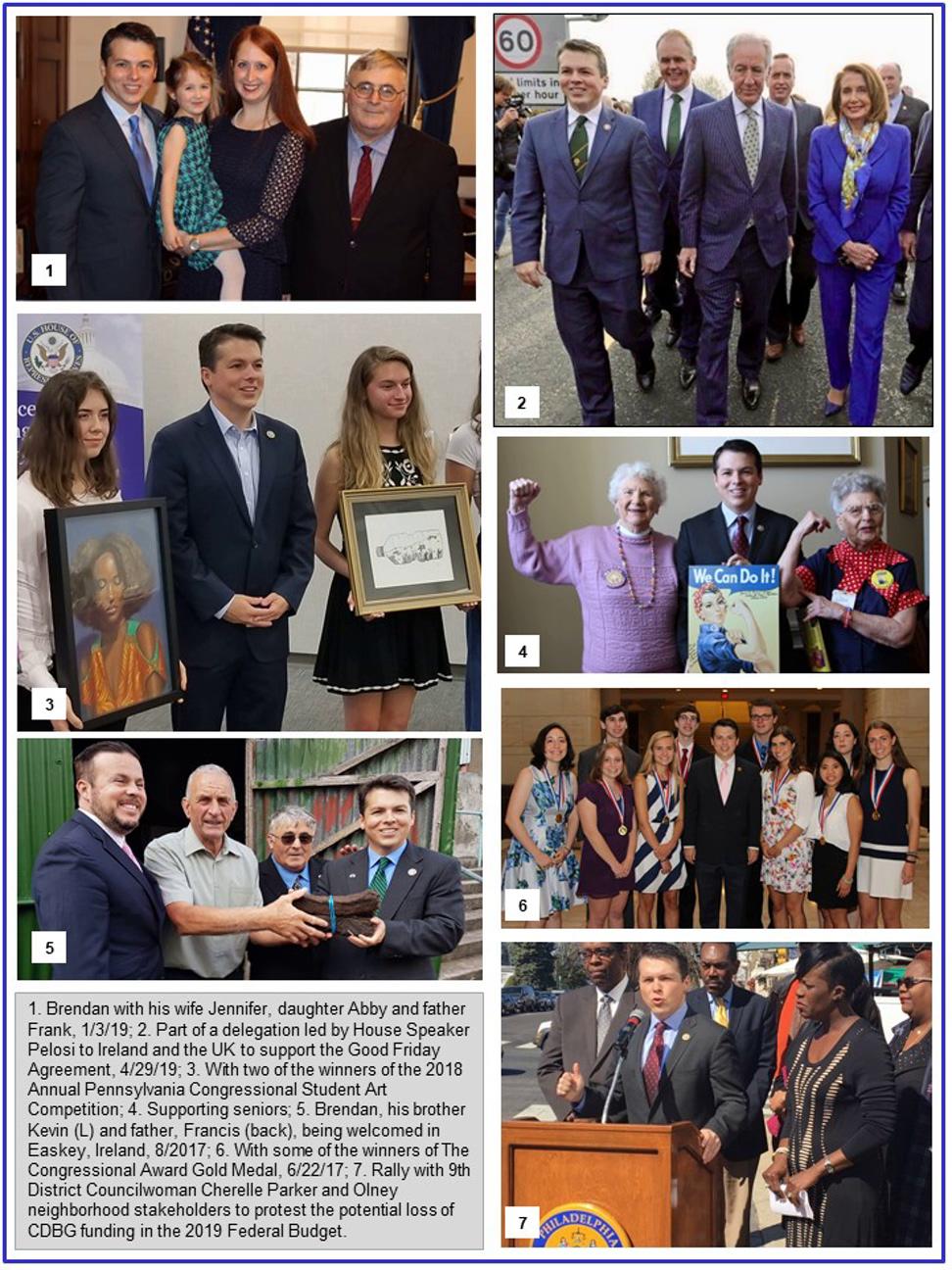