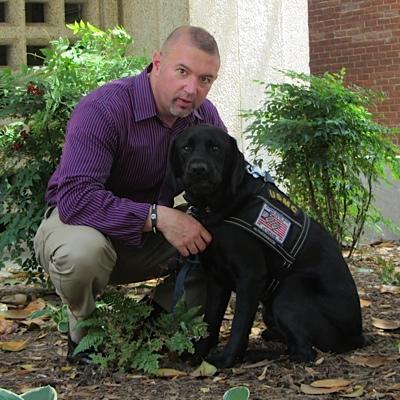 Marine Corps veteran Brendan Fitzgerald and his dog Russell offer hope and courage to veterans, their families, and others struggling to overcome trauma. Russell became the first service dog to “report for duty” at the Department of Veterans Affairs. Russell helped lead him from almost fatal consequences of Post Traumatic Stress Disorder (PTSD) and Traumatic Brain Injury to coping with daily life and leading a successful family life and career. He shared their story for a documentary produced by the Constantine Foltis Memorial Foundation. When asked what advice he would give to other veterans during his interview for the documentary, Brendan said, “Get help, whether it is a service dog or something else, just get help.”

Born March 16, 1967, Brendan grew up in Glastonbury, Connecticut, where he graduated from high school and joined the Marine Corp in 1985. He received prestigious assignments abroad and returned to civilian life after five years. He served in the reserves until he volunteered for active duty a second time, this time to guard Abu Ghraib Prison as an Infantry Company First Sergeant.

Brendan endured constant stress during active duty in Iraq because enemies attacked day and night and he sometimes joined troops on the battlefield. The Marines discharged him on disability after twelve months and he returned to civilian life in the US. He found work difficult to find and the jobs he did find stressful. He and his wife, Lisa, and his beloved dog, Gunny, moved to Oklahoma where Brendan began his career with the VA .

Symptoms of PTSD surfaced and became more intense. He sought professional help from VA, going from one doctor to another until he finally clicked with a psychologist. He transferred to a job at VA headquarters in Washington, DC, so once again Brendan had to find doctors with whom he could identify. He knew that he might die if he didn’t receive professional help. Gunny’s death plunged him even deeper into despair. Grief-stricken, Brendan checked himself into a VA PTSD facility in Baltimore. Co-workers donated their leave to him to help him pay expenses.

Before entering the hospital, Brendan had applied to Puppies Behind Bars for a service dog trained to help disabled vets. Training for each dog cost $27,000. Young puppies trained in prison, then outside the prison, as they got older to prepare them for situations they might meet in daily life. Puppies Behind Bars informed Brendan during his hospital stay that it had turned him down. He asked his management for help and applied again after getting over his disappointment. Soon, Brendan wept tears of joy upon hearing the news that he would receive a service dog. Brendan trained in Colorado with another veteran and two dogs. Russell chose Brendan.

Russell helps Brendan in many ways, both as a service dog and as a friend. Before Brendan returned to work, VA announced in its newsletter sent around the world that Brendan would return to work bringing Russell, the first service to work at VA. Together, the two ride the subway, go to work, join social gatherings, and venture out in public places. At night, Russell pulls the covers off of Brendan when he has nightmares and calms him down.