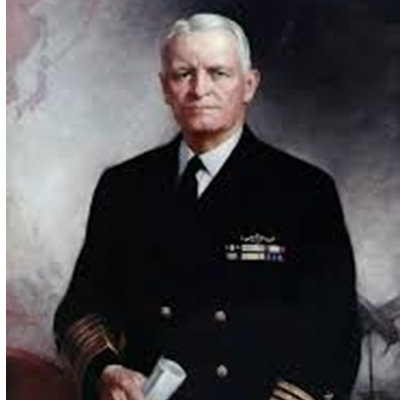 Chester William Nimitz, who guided Allied forces to victory in the Pacific in World War II, was born in Fredericksburg, Texas, on February 24, 1885, the son of Chester Bernard and Anna (Henke) Nimitz. His father died before he was born. During his early years his grandfather Charles H. Nimitz, a German immigrant, former seaman and owner of the Nimitz Hotel, served as the father figure whom Nimitz credited with shaping his character and values. In 1890 Chester's mother married her late husband's younger brother, William Nimitz, who managed the St. Charles Hotel in Kerrville, where Chester eventually became the chief handyman. Young Nimitz, with little prospect of a college education otherwise, determined to seek appointment to the United States Military Academy. On learning that no such appointment was immediately available, he applied for the United States Naval Academy instead. He graduated seventh in his class of 114 at Annapolis on January 30, 1905. After two years' training as a passed midshipman aboard the U.S.S. Ohio, he was commissioned an ensign and given command of the old Spanish gunboat Panay (Video) in the Philippines. After transfer to the destroyer Decatur, he ran the ship aground and was court-martialed, reprimanded, and denied his request for battleship duty; he was assigned to a submarine instead. In four consecutive undersea commands, he became a leading "pigboat" authority and built a reservoir of experience that proved invaluable in both world wars.

In 1913 Nimitz married Catherine Vance Freeman of Wollaston, Massachusetts. They eventually had three daughters and a son. Shortly after marriage, the Nimitzes left for Europe, where he studied diesel engines in Germany and Belgium. He returned to Brooklyn Navy Yard to supervise the building and installation of the first diesel engine to power a United States Navy vessel. With the rank of commander in World War I, he served as chief of staff to Adm. Samuel S. Robison, commander of the Atlantic Submarine Force, then as executive officer of the battleship South Carolina. (Video) Afterward, Nimitz went to Pearl Harbor to build the submarine base and command the Submarine Division.

Between wars, he progressed through the various steps prescribed by the Navy for training its commanders. At the Navy War College, 1922–23, he dealt with a theoretical Pacific war, developing the plan that he eventually put to practical use. He then served again as chief of staff to Admiral Robison, who had become commander-in-chief of the United States Fleet. Nimitz was assigned to the University of California at Berkeley in 1926 to develop the prototype for the Naval Reserve Officers Training Corps; there he produced a model that was duplicated in fifty-two colleges and universities. Nimitz left Berkeley with the rank of captain in 1929 and progressed through commands of a submarine division, the San Diego destroyer base, and the cruiser Augusta, flagship of the Asiatic Fleet.

After service in Washington as assistant chief of the Navy Bureau of Navigation and promotion to rear admiral, he commanded first a cruiser division, then a battleship division. In 1939 he became chief of the Bureau of Navigation, a position he still held when the Japanese attacked Pearl Harbor on December 7, 1941. (Video)  In the aftermath of the attack, Adm. Husband E. Kimmel was relieved as commander-in-chief of the Pacific Fleet, and Nimitz was chosen to replace him. The change of command took place at Pearl Harbor on Christmas Day, 1941.

With the rank of fleet admiral, Nimitz viewed his primary task as combatting the tendency of both the American public and the military to reflect on mistakes that had permitted the Pearl Harbor disaster and brought the nation into World War II. He focused instead on the enemy's mistakes and the positive aspects of the American position: the Pearl Harbor submarine base remained intact, and the aircraft carriers, at sea on December 7, had been spared. From the nerve center at his headquarters, Nimitz directed these forces to action. With James "Jimmy" Harold Doolittle's carrier-based raid on Japanese cities in April 1942 and victories in the Coral Sea and at Midway Island, confidence was restored. Allied forces seized the initiative. Nimitz was named commander-in-chief of Pacific Ocean Areas, in addition to his Pacific Fleet command. With authority over the entire Pacific theater except for Gen. Douglas MacArthur's Southwest Pacific sector and the inactive southeast, Nimitz coordinated the offensive that brought the Japanese to unconditional surrender. He signed the peace treaty for the United States aboard the battleship Missouri in Tokyo Bay on September 2, 1945. He was much decorated by foreign governments and was awarded both the Army and Navy Distinguished Service medals of the United States.

On December 15, 1945, Nimitz succeeded Adm. Ernest J. King as commander-in-chief of the United States Fleet. He withdrew after two years. Never officially retired, he was assigned to "duty as directed by the Secretary of the Navy." He served the United Nations as 'Roving Ambassador,' was a regent of the University of California, and, by appointment of President Harry Truman, became chairman of the Presidential Commission on Internal Security and Individual Rights.

After a severe fall in 1963, the admiral moved with Mrs. Nimitz from their home in Berkeley to naval quarters on Treasure Island in San Francisco Bay. In January 1966 he suffered a stroke, complicated by pneumonia. He died on February 20, 1966, and was buried in Golden Gate National Cemetery, San Bruno, California. In 1964 a local citizens' group established the Fleet Admiral Chester W. Nimitz Memorial Naval Museum in the old Nimitz Hotel in Fredericksburg. The project evolved into the state-supported Admiral Nimitz Center and thence into the National Museum of the Pacific War. Besides the memorabilia and multimedia displays pertaining to World War II, the park includes the Japanese Peace Garden, a bicentennial gift from Japan in 1976.

The original article and bibliography were prepared by Robert S. Weddle for the Texas State Historical Association, the Handbook of Texas Online. All photographs, unless otherwise noted, are from the original article and all image are available on the Internet and included in accordance with Title 17 U.S.C. Section 107. Additional hyperlinks and public domain photographs have been added. 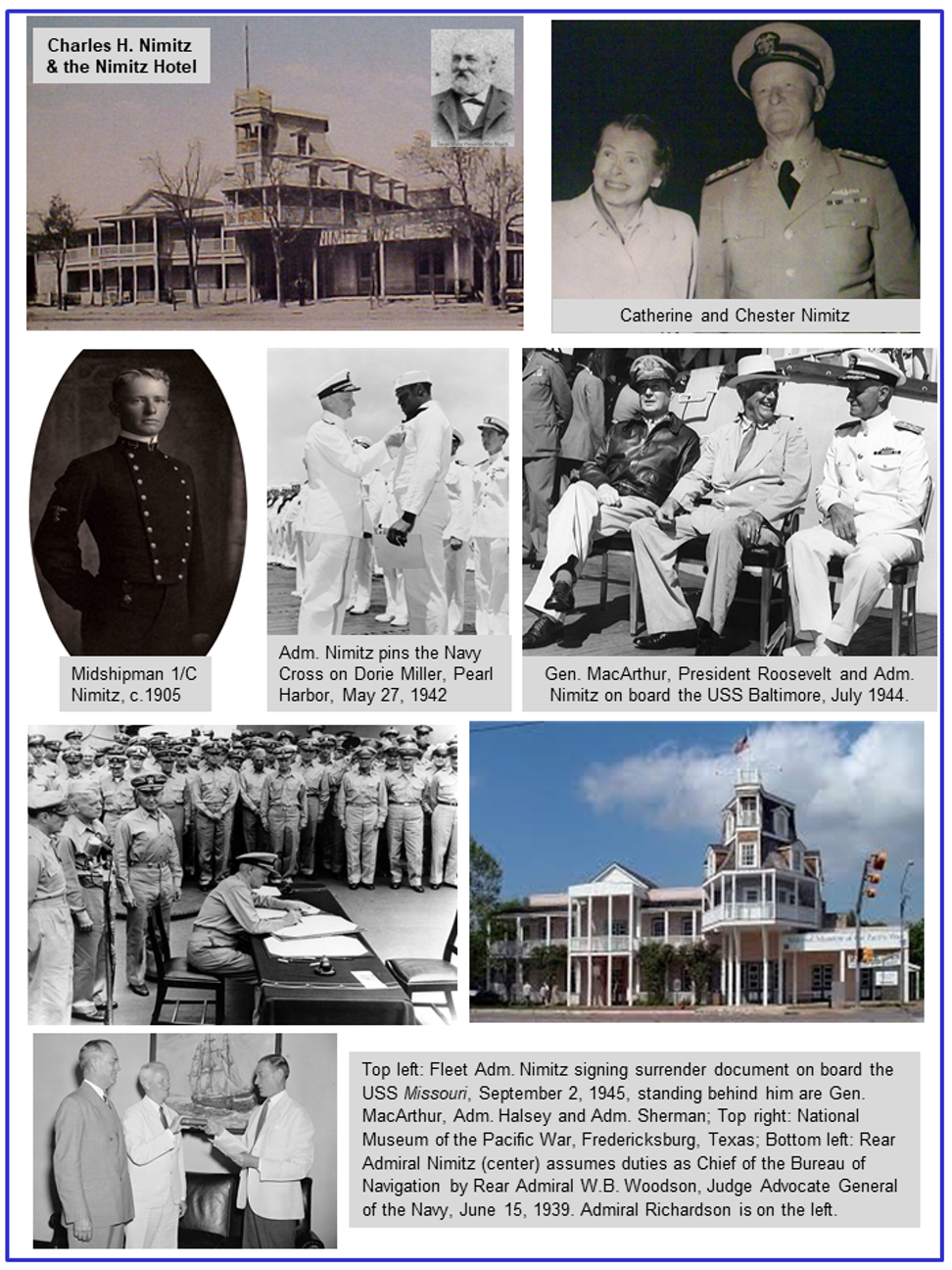