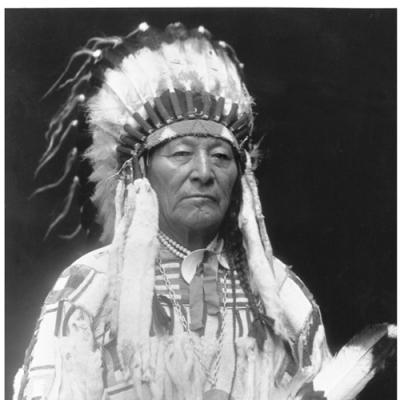 Chief Plenty Coups was the last traditional chief of the Crow Nation because, after his death, it was agreed that no other Crow could match his many achievements. At the time of his birth into the Mountain Crow tribe, near Billings, Montana, the Crow Nation and many other major Native American tribes were enduring great hardships. They had contracted many unfamiliar diseases due to contact with white settlers; the bison herds were exterminated; and their land holdings were reduced by treaties designed to provide land for Western settlement and commercial opportunities for mining, timber and trappers. Tribal wars increased to compete for the remaining ancestral lands not taken by treaty.

As a young man, Plenty Coups began having visions. His vision that the bison herds would be destroyed, that cattle would cover the plains and that the wind would blow down all the trees, save one, guided his path in life. For him, this meant that the white man would take over the lands and that all the tribes—except the one that learned to work with the white man—would perish. He earned a lasting reputation as a warrior while still a young man. By the time he was 26, he had counted at least one each of the many coups (or acts of bravery) the Crows demanded of a war chief—striking the first enemy in battle, capturing a gun, taking a tethered horse from an enemy camp and leading a successful war party.

His eloquence, bravery and leadership skills led to his becoming chief of the Crow Tribe in 1876. He led General George Crook’s Native American scouts, perhaps keeping the soldiers from the fate suffered by Custer’s army that same year at Little Big Horn. Chief Plenty Coups was one of the first of his tribe to become a rancher and merchant and a role model for how to adapt to the changing times. He continued his active support of the United States, urging young men to join the United States Armed Forces in World War I.

Elected “Chief of Chiefs” by his peers, he represented all American Indians at the dedication of the Tomb of the Unknown Soldier at Arlington National Cemetery November 11, 1921 (see image below). As a gesture to help heal the wounds of the past, he donated part of his land to create a park where all people could live in harmony. After his death in 1932, the land became Chief Plenty Coups State Park with his home, his grave and a museum. (Photograph by De Lancey W. Gill, 1913. National Anthropological Archives, Smithsonian Institution, 3404-B-1.)