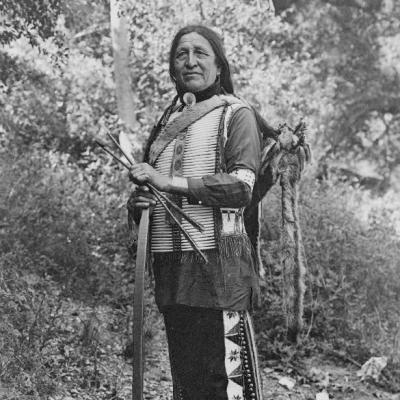 Chief Standing Bear, head of the Ponca Native American Tribe, successfully argued in 1879 in the U.S. District Court in Omaha that Native Americans are "persons within the meaning of the law" and have the right of habeas corpus.

Standing Bear was born c. 1829 in the traditional Ponca homeland near the confluence of the Niobrara and Missouri rivers. About thirty years later, the tribe sold its homeland to the United States, retaining a 58,000-acre reservation between Ponca Creek (a Missouri River tributary) and the Niobrara River. On this reservation the Poncas lived a life of hardscrabble farming and fear; the United States did little to protect them from attacks from the Brule Sioux. When the federal government created the Great Sioux Reservation in 1868, the Ponca Reservation was included within its boundaries, depriving them of title to their remaining lands.

In 1877, the federal government decided to remove the Poncas to Indian Territory. Standing Bear, a tribal leader, protested his tribe's eviction. Federal troops enforced the removal orders, with the result that the Poncas arrived in Indian Territory in the summer of 1878. Discouraged, homesick and forlorn, the Poncas found themselves on the lands of strangers, in the middle of a hot summer, with no crops or prospects for any as the time for planting was long past.

Since the tribe had left Nebraska, one-third had died and nearly all of the survivors were sick or disabled. Talk around the campfire revolved around the "old home" in the north. The death of Chief Standing Bear's sixteen-year-old son in late December 1878 set in motion the event which was to bring a measure of justice and worldwide fame to the chief and his small band of followers.

Wanting to honor his son's last wish to be buried in the land of his birth and not in a strange country where his spirit would wander forever, Standing Bear gathered a few members of his tribe—mostly women and children—and started for the Ponca homeland in the north. They left in early January 1879 and trekked through the Great Plains winter, reaching the reservation of their relatives, the Omahas, about two months later. Standing Bear carried with him the bones of his son to be buried in the familiar earth along the Niobrara River.

Because Indians were not allowed to leave their reservation without permission, Standing Bear and his followers were labeled a renegade band. The Army, on the order of The Secretary of the Interior, arrested them and took them to Fort Omaha, the intention being to return them to Indian Territory. General George Crook, however, sympathized with Standing Bear and his followers and asked Thomas Henry Tibbles, an Omaha newspaperman, for help. Tibbles took up the cause and secured two prominent Omaha attorneys to represent Standing Bear.

The lawyers filed a federal court application for a writ of habeas corpus to test the legality of the detention, basing their case on the 14th Amendment to the Constitution. The government disputed the right of Standing Bear to obtain a writ of habeas corpus on the grounds that an Indian was not a "person" under the meaning of the law.

The trial of Standing Bear v. Crook began on May 1, 1879, before Judge Elmer S. Dundy in U.S. District Court in Omaha and continued into the evening of the following day. On May 12, Judge Dundy ruled in favor of Standing Bear, reasoning that he and his band were indeed "persons" under the law, entitled to sever tribal connections and were free to enjoy the rights of any other person in the land. The government appealed Dundy's decision, but the Supreme Court of the United States refused to hear the case, leaving Standing Bear and his followers free in the eyes of the law.

Here is their story "In Their Own Words."

“We lived on our land as long as we can remember. No one knows how long ago we came there. The land was owned by our tribe as far back as memory of men goes. We were living quietly on our farms. All of a sudden one white man came. We had no idea what for. This was the inspector. He came to our tribe with Rev. Mr. Hinman. These two, with the agent, James Lawrence, they made our trouble.”

“They said the President told us to pack — that we must move to the Indian Territory.”

“The inspector said to us: ‘The President says you must sell this land. He will buy it, pay you the money and give you new land in the Indian Territory.’”

“We said to him: ‘We do not know your authority. You have no right to move us till we have had council with the President.’”

“We said to him: ‘When two persons wish to make a bargain, they can talk together and find out what each wants and then make their agreement.’”

“We said to him: ‘We do not wish to go. When a man owns anything, he does not let it go till he has received payment for it. We will see the President first.’”

“He said to us: ‘I will take you to see the new land. If you like it, then you can see the President, and tell him so. If not, then you can see him and tell him so.’ And he took all ten of our chiefs down. I went, and Bright Eyes’ uncle went. He took us to look at three different pieces of land. He said we must take one of the three pieces, so the President said. After he took us down there, he said: ‘No pay for the land you left.’”

“We said to him: ‘You have forgotten what you said before we started. You said we should have pay for our land. Now you say not. You told us then you were speaking the truth.’”

All these three men took us down there. The man got very angry. He tried to compel us to take one of the three pieces of land. He told us to be brave. He said to us: ‘If you do not accept these, I will leave you here alone. You are 1,000 miles from home, you have no money. You have no interpreter, and you cannot speak the language.’ And he went out and slammed the door. The man talked to us from long before sundown till it was nine o’clock at night.” 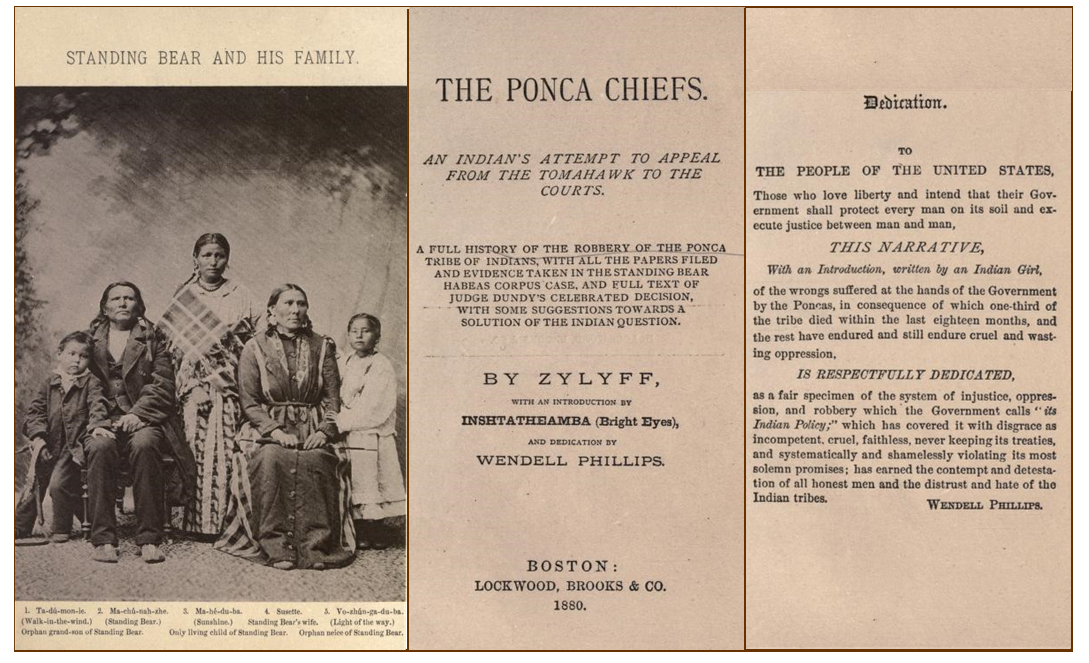 Sponsored By: Americans All