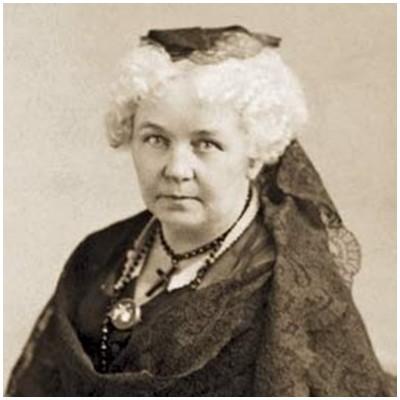 Note: The numbers in [bold brackets] identify the images in the photograph collection.

Elizabeth Cady Stanton stirred strong emotions in audiences from the 1840s to her death in 1902. Was she catalyst, crusader or crank? Dedicated wife and mother? Privileged white woman, hiding her family's slave-holding past and stealing credit for other's work in the women's rights movement? Feminist firebrand, alienating coworkers with unnecessary controversy and uneasy alliances? Political strategist? popular speaker, philosopher and writer, who returned to the argument of individual rights in her last published speech? Lifelong friend? For different people and at different times, Stanton was all of these. The fruits of her long life are still under scrutiny and up for debate. One thing is sure: she attracted attention and used it to push her ideas about women, rights and families for more than fifty years.

She was born into the leading family of Johnstown, N.Y. on November 12, 1815, the daughter of conservative Daniel Cady [1] a lawyer, wealth land speculator, member of the Federalist Party, served one term in the U.S. Congress and became a justice in the New York Supreme Court. Her mother, Margaret Livingston Cady, was more progressive, supporting the radical Garrisonian wing of the abolitionist movement and signing a petition for women's suffrage in 1867. At nearly six feet tall, Elizabeth's mother, "an imposing, dominant and vivacious figure who controlled the Cady household with a firm hand," modeled female presence.

Elizabeth was the seventh of eleven children, six of whom died before reaching full adulthood, including all the boys. Her mother, exhausted by giving birth to so many children and the anguish of seeing so many of them die, became withdrawn and depressed. Tryphena, the oldest daughter, together with her husband Edward Bayard, assumed much of the responsibility for raising the younger children.

Elizabeth was educated at the Johnstown Academy, a local boy’s school. The only girl in its advanced classes in mathematics and languages, she won second prize in the school's Greek competition and became a skilled debater. She enjoyed her years at the school and said she did not encounter any barriers there because of her sex. Her good mind and ready wit, both well-trained by her prominent and wealthy family, opened doors of reform that her father would rather she left shut. She studied in N.Y. at Troy Female Seminary [15] (also known as the Emma Willard School) and learned the importance of the law in regulating women through her father's law books and interactions with him and his young male law students.

As Elizabeth entered her twenties, her reform-minded cousin philanthropist Gerrit Smith [2] introduced her to her future husband, Henry Brewster Stanton [3], a guest in his home. Stanton, an agent for the American Anti-Slavery Society and an eloquent speaker for the immediate abolition of slavery, turned Elizabeth's life upside down. In 1840, they married--against her parents' wishes--in a ceremony that omitted the vow “to obey.” They departed immediately on a honeymoon to London, England, which was hosting at Exeter Hall, on June12-23, the first meeting of the World's Anti-Slavery Society. It was organized by the British and Foreign Anti-Slavery Society, largely on the initiative of the English Quaker Joseph Sturge [4], and Henry was a delegate representing the American Society.

Despite a prior statement that women would not be admitted to the meeting because of their sex, many American and British female abolitionists, including Elizabeth, showed up. After much debate, it was decided that they could sit in the upper end and at one side of the room. The women could watch and listen from the spectator’s gallery but could not take part. One of the other spectators was short, slight, and gentle in demeanor, but was every bit as imposing as Stanton's mother. That was Lucretia Mott [6], a Hicksite Quaker preacher well-known for her activism in anti-slavery, woman's rights, religious and other reforms. She and Elizabeth became close friends and vowed to hold a convention immediately upon returning to the U.S. to discuss the injustices against women.

When the Stanton’s finished with their London trip, they returned to Johnstown, where Henry studied law with Judge Cady. After Henry passed the bar exam, they set up housekeeping and started a family in Albany, N.Y. They had seven children. At that time, child-bearing was a subject that should be handled with great delicacy. Elizabeth took a different approach, raising a flag in front of her house after giving birth, a red flag for a boy and a white one for a girl.

The Stanton’s then moved to Boston. Henry joined a law practice and they both became active in reform circles. They moved to Seneca Falls in 1847, as Henry was in poor health and needed a change. Elizabeth father invited her and her family to live in a house he owned and in June 1847, he transferred the deed to the property to his Elizabeth.

In Seneca Falls, Elizabeth first experienced the difficulties facing a wife and mother in an isolated 19th-century household. She lacked the intellectual and cultural stimulation she had enjoyed in Boston and found her-self overwhelmed by childcare and housework. This newfound understanding of women’s “proper sphere” led her to complain vehemently to four other women friends about its injustice at a gathering held July 9, 1848, at the home of Jane (and Richard) Hunt [5]. These four women (Lucretia Mott, Mary Ann M’Clintock [7], Martha Coffin Wright [8], and Jane Hunt--all wives and mothers) understood Stanton’s frustrations. Also, as active anti-slavery and temperance reformers, they had experienced discrimination by male coworkers. Together they decided to call a woman’s rights convention in July to publicly discuss these injustices against women.

For Elizabeth, taking the first step to change her unhappy state made all the difference. She began to write, recruit, strategize, network, and organize for the cause of women’s rights. Held in July, the First Woman's Rights Convention (known as the Seneca Falls Convention), attracted more than three hundred people. Elizabeth read her now-famous “Declaration of Sentiments” [9] protesting women’s inferior legal status and listing eleven resolutions for the moral, economic, and political equality of women, the most radical of which demanded “the elective franchise (the right to vote).” It was modeled after the U.S. Declaration of Independence. Also known as the Declaration of Rights and Sentiments, it was signed by 68 women and 32 men.

At the First Woman's Rights Convention, Elizabeth learned more about Mott and her wide circle of fellow Quakers and anti-slavery advocates, including M'Clintocks, Hunts, Posts, deGarmos, and Palmers, thus opening a new world of action to her. Between 1848 and 1862, they worked the Declaration of Sentiments' call to "employ agents, circulate tracts, petition the State and national Legislatures, and endeavor to enlist the pulpit and the press in our behalf." They also organized, sent letters to, or attended, national conventions between 1850 and 1862. At the Rochester Women's Rights Convention of 1848, Abigail Bush was elected as its president, making it the first public meeting composed of both men and women in the U.S. to have a woman as its presiding officer. It was well acknowledged that she conducted the meeting in a competent manner, quickly dispelling doubts about the the wisdom of the convention's actions.

The Rochester Convention was organized primarily by a group of Hicksite Quakers who had resigned from their local congregation in the mid-1840s after it disapproved of their public involvement in anti-slavery activities. 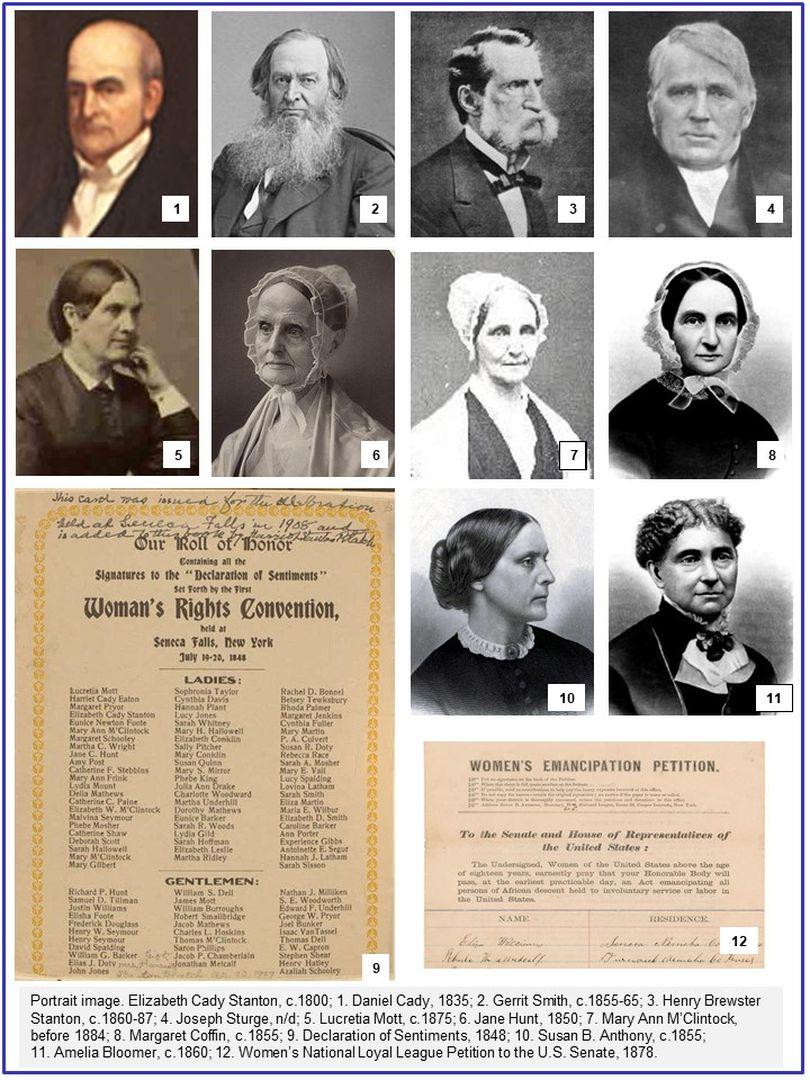