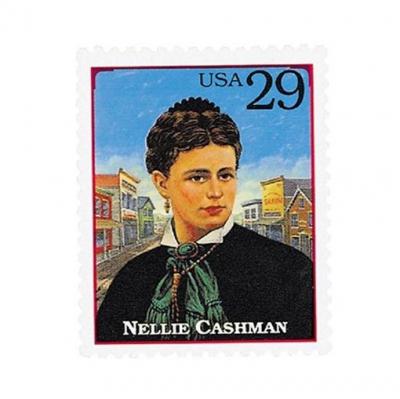 American western music and Irish music have often been compared and that is due to the many Irish who settled the American west. From lawmen to bad men they color America’s history. There was even a well-known set of outlaw brothers who were named after Irish patriots, but there were also Irish business people and pioneers and they helped shape the destiny of a wilderness.

One of the best known in her time was a lady from County Cork named Ellen Cashman. Ellen went to America, like so many others, fleeing the effects of the Great Hunger. She arrived in Boston in 1850 with her mother, Fanny, at the tender age of five where she grew up caring for a younger sister. An ambitious young lady, she worked as a bellhop in a well-known Boston hotel when she decided to follow the call of the American west with the idea of making her fortune. She moved to San Francisco where she found employment as a cook at various mining camps. By 1872, she’d saved enough money to open a miner’s boarding house in Nevada. In this male-dominated arena, she relied on her courage, her faith, and a formidable pride in her Irish roots to survive. It wasn’t long before she was headed for a gold-strike in British Columbia along with 200 Nevada miners. Described as Pretty as a Victorian cameo and, when necessary, tougher than two-penny nails, the extraordinary Nellie Cashman wandered frontier mining camps of the 1800s seeking her fortune and a way to help others.

A devout Catholic, she set up a boarding house for miners, asking for donations to the Sisters of St. Anne in British Columbia in return for the services available at her boarding house. On a trip to Victoria, to deliver $500.00 to the nuns, she heard of 26 miners trapped by a snowstorm in the Cassiar mountains who were suffering from scurvy. Nellie immediately organized an expedition with six men and collected food and medicines and set off to rescue them. Conditions in the Mountains were so dangerous at the time, that the Canadian Army considered it a foolish venture and sent troops to stop her and bring her back safely. They found her on the ice of Stikine River, cooking her evening meal. She offered the troopers some tea and convinced them that she would not head back without rescuing the men. After 77 days of trekking through stormy weather, pulling 1,500 pounds of food, often through 10 feet of snow, they found the sick men, but instead of the 26 reported, there were 100 men. Nellie nursed them all back to health with a Vitamin C diet and endeared herself to the entire mining community, earning the first of her many titles, Angel of the Cassiar. However, when the strike petered out, she bid farewell and headed south for the big silver strike in Tucson, Arizona.

Nellie arrived in Tucson on October 10, 1878. It was a growing town where Nellie hoped to prosper, and she bought, worked, and sold mining claims, boarding houses, restaurants, and mercantile shops, each one adding to her climb up the ladder to security. In June 1879, just after opening Delmonico’s restaurant and advertising ‘the best meals in town,’ a silver strike in Tombstone turned her head. Here was a town growing faster than Tucson. Retaining ownership in the Delmonico, Nellie headed for Tombstone. There, she opened a boot and shoe store, then a general store, and, a year later she was back in the restaurant business with Tombstone’s Russ House. Among her customers were fellow citizens like the McLowery gang, the Clantons, and the Earps—all Irish American. According to a local story, a client once complained about Nellie's cooking and Doc Holiday, sitting nearby, drew his pistol and asked the man to repeat what he’d said. Looking down the barrel of Doc’s gun, the man said, Best meal I ever ate.

Nellie decided that since Tombstone was known as the most lawless town in the west, it needed a dose of religion. She befriended John Clum, editor of the Tombstone Epitaph, and he helped her champion the construction of a Catholic Church and Hospital. In the meantime, she persuaded the owners of the Crystal Palace Saloon to allow Mass to be held there every Sunday. During the week, she would walk the dusty streets of Tombstone soliciting donations from gamblers, prostitutes, miners, outlaws, lawmen, and average citizens.  She added her own sizeable contribution and on November 28, 1880, due in large part to her efforts, the Catholic Mass was first held at the new Sacred Heart Church; construction of a hospital soon followed. Nellie’s organizing ability wasn’t limited to Church and Hospital, noting that almost 600 of Tombstone’s residents were native Irish, Nellie organized that town’s first St. Patrick’s Day celebration. It was a grand Ball held on March 17, 1881.

For her humanitarian efforts, Nellie is remembered today by historians as the Angel of Tombstone, in addition to her other titles of Angel of the Cassair, Frontier Angel, Saint of the Sourdoughs and Miner's Angel, but her contributions were far from over. Having brought civility to ‘The town too mean to die,’ Nellie moved on to Bisbee, Arizona where she leased the Bisbee Hotel and even prospected in the Harquahala mountains. She followed the lure of precious metal to towns in Wyoming, Montana, and New Mexico. Wherever she went, her fame preceded her, and everywhere she went she provided financial assistance to Catholic Churches and hospitals.

In 1898, she pulled up stakes again and headed back to British Columbia, Alaska, and the Yukon. St Joseph’s hospital in Victoria, British Columbia; St Mary’s hospital in Dawson, Alaska; and St Matthew’s hospital in Fairbanks, Alaska, all owe their existence in part to Nellie Cashman’s fund-raising activities. Beside her philanthropic fame, she was an astute businesswoman and a fair miner. There are even stories of her competing in an arctic dog-sled race while in her late sixties. Nellie’s last stop was Victoria, British Columbia, where she settled in 1923; then on January 25, 1925, Nellie Cashman, the Irish Angel of Tombstone, died of pneumonia.  She lies in a plot with the Sisters of St Ann, overlooking Ross Bay. When asked by a reporter why she never married she said: Why child, I haven't had time for marriage. Men are a nuisance anyhow, now aren't they?  They're just little boys grown up. 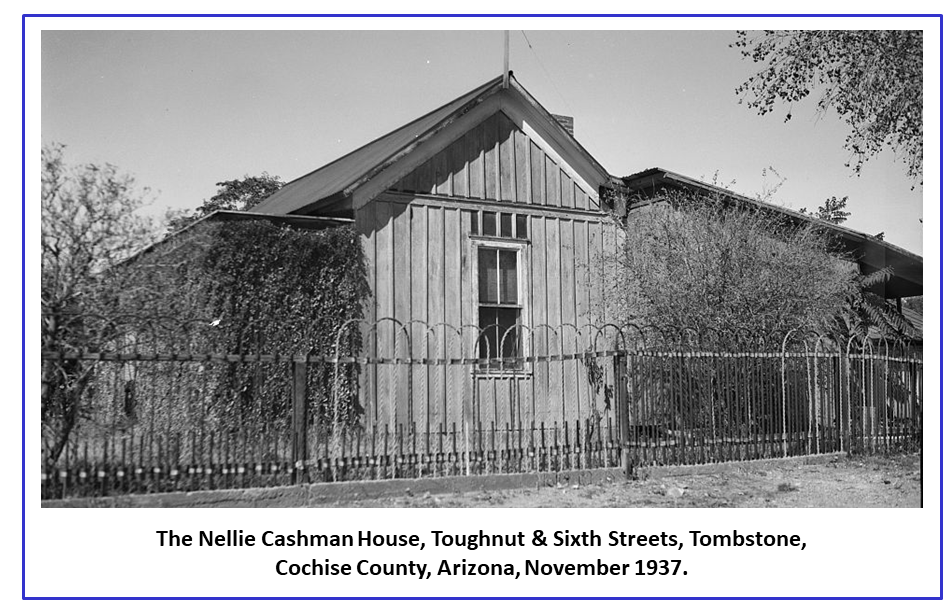