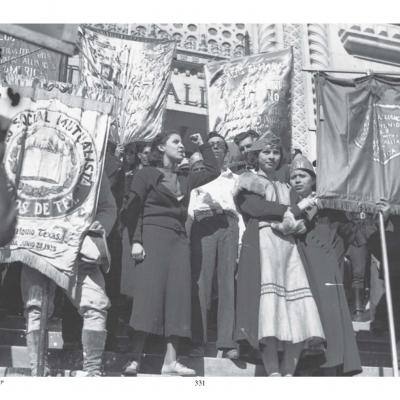 Emma Tenayuca was born in San Antonio, Texas, one of 11 children, and lived with her grandmother to ease the burden on her family. When she was a young, distinguished student at Brackenridge High School, Tenayuca was struck by the differences between what she read about life and the realities she witnessed around her every day. After graduating in 1934, she took a job as an elevator operator and dedicated her life to improving the treatment of poor people.

She first became aware of working people’s struggles when she learned about the strikes at the Finck Cigar Company. To show her support, she joined the picket line and was arrested. An energetic leader, she is best known for her fiery speeches and union organizing work in San Antonio. Her desire to free Hispanics from the exploitation they suffered in local labor markets led her to join the Workers Alliance in 1936 and the Communist Party a year later. In 1937 she became general secretary of the Workers Alliance.

Tenayuca was very active in the pecan shellers’ strike of 1938, one of the longest and most bitter strikes of the Great Depression. Most of the pecan shelling in the country was done in San Antonio, where workers were typically paid about six cents per pound of pecans. Tuberculosis was rampant, generally believed to be caused by the fine dust put into the air during the shelling process. Working conditions were substandard, with poor cleaning facilities and inadequate restrooms.

When a decision was made to cut wages in half, 12,000 workers struck. Tenayuca was asked to be the strike representative, and she was granted permission to speak at the Municipal Auditorium at a Communist party meeting held August 29, 1938. The meeting turned into a violent riot when thousands of people, all opposed to the Communist party, broke into the meeting and began throwing rocks and bricks. She escaped but was the constant recipient of death threats.

Because of the riot and of her being blacklisted, Tenayuca moved to San Francisco and obtained a teaching certificate in 1952. She returned to San Antonio in the 1960s and taught at the Harlandale School. She earned her master’s degree in education from Our Lady of the Lake University in 1974 and retired in 1999. (The photograph shows her standing on the steps of San Antonio City Hall, c. 1938, and was obtained from The San Antonio Light Collection, Institute of Texan Cultures, 1541-D.)