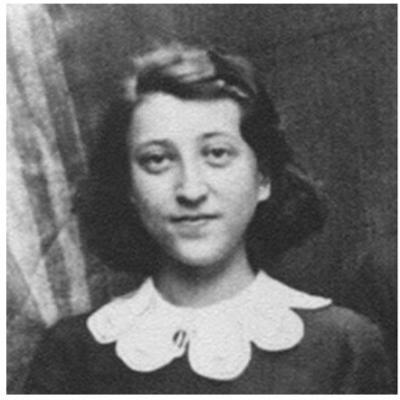 “Was it possible that I lived through that?” asks Gertrude Boyarski, referring to her experiences during World War II. “Sometimes I say, ‘Was it only a nightmare, or was it true?’”

Her family’s hardships began in 1939 when war came to Poland. Gertrude was sixteen years old when her country was attacked from the west by Germany, and then from the east by the Soviet Union. Her hometown of Derechin, in eastern Poland, was occupied by Red Army troops and the area was annexed by the Soviet Union. In high school, she had learned to speak Russian, which had replaced Polish as its official language. A good student, she could not pursue more advanced studies in another town because of her frail health. Instead, she studied to become a tailor.

The oldest of four children, her family was religious. Her mother lit the Sabbath candles, her father went to shul [synagogue] to pray every day, and the family observed the Jewish dietary laws. Her father made his living as a butcher for the Jewish community, and in the summer, he earned extra money by painting houses.

In June 1941, Germany broke its non-aggression pact with the Soviet Union and invaded Poland. Three months later, German forces attacked Derechin. She was eighteen-year-old. The German occupiers immediately subjected Derechin’s Jewish population to a series of harsh restrictions. Jews had to wear a yellow badge with the Star of David attached to their clothing; walk in the streets, not on the sidewalk; and could no longer use public transportation. They couldn’t enter theaters or libraries or go outdoors at night. They had to turn over all their money, jewelry, and other valuables to the Germans, and they had to work for them whenever they were told to do so. (Video)

The Germans created a ghetto in Derechin and forced the town’s Jewish population to move into it. Certain Jews who were skilled in a trade and regarded as “useful” to the Germans were placed outside the ghetto. Because her father was a house painter, her family was placed in a building in front of the police station, where they lived for almost a year. They couldn’t move about freely, but because they lived outside the ghetto, they were called “the living Jews” by those who lived inside. During this time, she helped to provide for her family by using her skills as a tailor, usually receiving food in payment for her work.

In 1942, Nazi Germany began to implement their ” Final Solution”, a secret plan to exterminate all European Jews. The Germans began to systematically destroy the ghettos and deport the remaining Jews to concentration camps and death camps.

Late at night, on July 24, 1942, Gertrude’s father heard a commotion in the police station and suspected the Germans were going to initiate a mass killing in the ghetto. A friend of her father said, “Ah, they are not going to kill us. They’ll kill those in the ghetto.” But her father said, “How come you don’t understand the situation? Aren’t you a Jew? They’ll kill us just as well as they kill them.”

Escape to the Forest

Gertrude’s mother told her four children to get out of bed and get dressed. They were going to escape. There was a guard in their backyard, but when he moved, the family decided to run. They hurried to an underground cellar where they hid for several hours before fleeing into the cornfields and then to the outlying woods. That night, almost all the inhabitants of the ghetto—between 3,000 to 4,000 Jews—were murdered.

In the forest, Gertrude’s family joined up with a group of 250 other Jews who had escaped from the ghetto. The forest also contained Soviet and Polish soldiers who had escaped from German concentration camps where they had been held as prisoners of war. These soldiers formed the largest number of partisans in the area, and they were under the command of a Soviet officer, Commander Pavel Bulak, who took charge of organizing most of the Jewish survivors.

Also, in the forest was Yehezkel Atlas, a daring young Jewish doctor who had been providing medical assistance to local farmers and partisans. Dr. Atlas formed a partisan unit of some 50 Derechin survivors. He was intent on avenging the deaths of those who had lost their lives in the ghetto and urged an immediate attack on Derechin. Commander Bulak disagreed; he thought the partisans didn’t have the experience or enough weapons to be successful.

Commander Bulak said believed that Jews were not fighters, so he challenged them to prove themselves. If they could break into the Derechin police station and bring back the ammunition stored there, he would take the fighters into his partisan units to help protect the women and children who could not fight. Some of the women cried, wondering if their men would return alive. But Gertrude’s mother said, “If my husband or son will be killed, I’ll be proud. At least they’ll be killed fighting.” (Video)

Two weeks after the Derechin massacre, 300 partisans, a third of them Jewish, descended on the town under cover of night to break into the police station. With very few weapons, the partisans attacked and killed over 60 policemen and returned to the forest with badly needed arms and ammunition. It was a hugely successful operation, and Gertrude’s father and brother returned unharmed.

Once Commander Bulak saw that “we meant business,” she says, he assigned the Jews to various fighting units. Gertrude’s mother and the two youngest children were placed in a “family camp” in the woods, which provided refuge for women, children, the sick, and the elderly. Gertrude chose to accompany her father and brother to one of the fighting units. She could have stayed but “sitting and hiding behind my mother’s skirts didn’t feel right,” she says. “I figured in the fighting unit I could take revenge, I could do something good.”

Life and Death in the Partisans

Gertrude’s unit was made up of about 50 people, including ethnic Russians, Poles, and Jews. The few women in the group were expected to cook, wash clothes, and provide general support. Both men and women were given rifles and taught how to clean, load, and shoot them. When the men went on a mission to attack or sabotage German troops, they sometimes took women along to serve as a backup unit or to give first aid to the wounded.

Life in the woods was difficult for the women, especially before Commander Bulak imposed stricter discipline on his troops. Men returning from a mission with clothes and food used these items to barter for sexual favors from the women. A woman on her own often felt obliged to partner with a man for protection. Gertrude felt lucky that her father and brother were there to make sure that she got the clothes and food she needed. “I didn’t have to sell myself to somebody to get a coat or a dress or a piece of bread,” she says. (Video)

Gertrude used to take turns with her father and brother visiting the family camp, to bring food to her mother and the children. During one of her visits, there was a surprise attack. Local collaborators raided the camp and began shooting. Gertrude’s mother was shot and killed, and her sister was wounded. In shock, Gertrude led her brother and sister through the forest to their father’s partisan unit. Once they were reunited, Gertrude’s father took his three children back to the family camp and remained there to care for them.

Soon after, another tragedy struck. A second attack on the family camp left Gertrude’s father, brother, and sister dead. Gertrude even knew one of the murderers, a young Polish man who had once been her partner in a dance class. “The power of life is very strong,” says Gertrude. “Although I saw everybody dead in front of me, yet I pleaded for my life.” Her former classmate said, “You’re a Jew. You must die.” 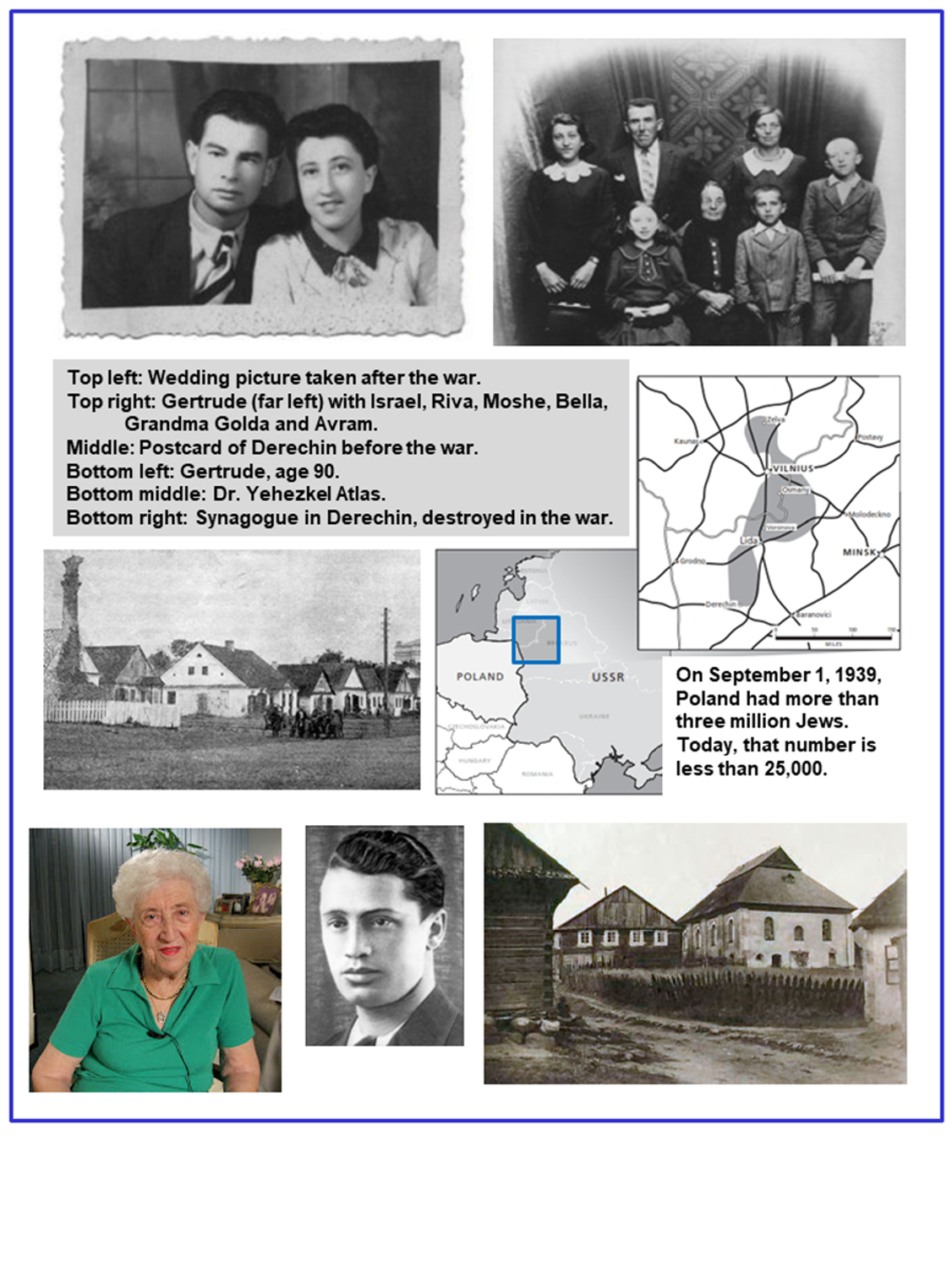