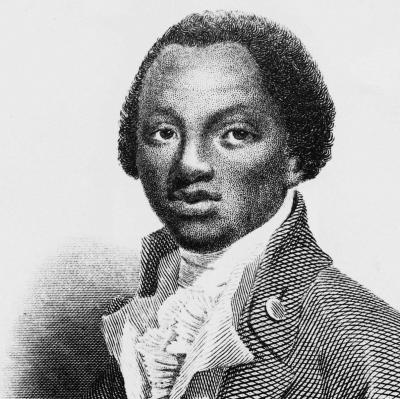 Olaudah Equiano was born in the Eboe province, West Africa in 1745, in an area of modern-day Nigeria. The son of a local chief, he was kidnapped with his sister when he was about 11 years of age and brought to a Virginia plantation, via the slave market in Barbados. In 1754 he was sold to Michael Pascal, an officer in the Royal Navy. Pascal named him Gustavus Vassa after a 16th-century Swedish King.

Vassa spent many years on the sea and ultimately landed in England, where he learned to read and write. Although he was a personal servant to Pascal, when a battle erupted at sea, his role was that of gunpowder carrier, carrying the powder from the magazine up to the gun decks. Because of his education and experience and the fact that he had been baptized, Vassa believed he was entitled to receive the same compensation as other seamen. He intended on using these funds to purchase his freedom; however, this never happened. After an unsuccessful attempt to obtain his freedom, he was sold in the West Indies’ slave market to Robert King, a Philadelphia Quaker, who continued Vassa’s schooling. King taught him to become a “gauger”—a person that gauges weights and measures.

By working in this position, Vassa saved enough money to buy his freedom from King and returned to England, where he finally received some of his money from the Royal Navy. Unable to find good work in England, he returned to the sea and made several voyages to the Mediterranean, the Caribbean, the Atlantic and the Arctic.

Once his sailing days were over, Vassa moved back to England and became active in the abolition movement. He was also part of a plan, along with fellow abolitionist Granville Sharp, to set up a colony in Sierra Leone as a home for all the unemployed Africans who were taken from Africa against their will. He was given the job of commissary of provisions and stores, a job that probably made him the first black civil servant in England. The plan was not successful because of the corrupt officials running the program.

In 1789 he published his autobiography, The Interesting Narrative of the Life of Olaudah Equiano, or Gustavus Vassa. The book became a best-seller as well as a major antislavery document, and it made him very wealthy. In 1792 he married an English woman, Susanna Cullen, and they had two daughters. (The photograph was obtained from the Schomburg Center for Research in Black Culture, The New York Public Library, Astor, Lenox and Tilden Foundations, 17.)