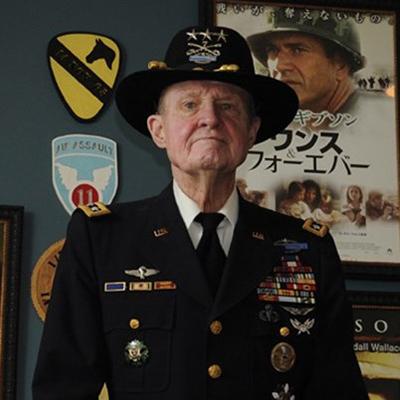 Born in Bardstown, Kentucky, Lt. Gen. Harold Gregory “Hal” Moore moved to Washington, DC, where he completed his high school education. He attended The George Washington University (GWU) for two years before receiving his appointment to the United States Military Academy. He graduated from West Point in 1945. He later pursued graduate studies at GWU and Harvard University, earning a master’s degree in international relations from Harvard.

Commissioned as a second lieutenant in 1945, Moore served with the 187th Airborne Infantry Regiment in Japan until 1948, when he was reassigned to Fort Bragg. While with the 82nd Airborne Division, he joined the Airborne Test Section, a special unit testing experimental parachutes. He eventually became a master parachutist, completing more than 300 jumps.

In 1954, after serving in the Korean War, Major Moore returned to West Point and served for three years as an instructor in infantry tactics. He next attended the Command and General Staff College, followed by a three-year tour in the Office, Chief of Research and Development, where his initiative and insights were key to the development of new airborne equipment and airborne/air assault tactics. This was followed in 1960 with a three-year tour in Oslo, Norway.

In 1964, Moore completed the course of study at the National War College. He was transferred to Fort Benning and commanded a battalion in the 11th Air Assault Division, undergoing air assault and air mobility training and tests until July 1965, when the Division was redesignated the 1st Cavalry division and sent to South Vietnam.

Moore’s leadership in the Battle of Ia Drang was well documented in his and co-author Joe Galloway’s 1992 book We Were Soldiers Once . . . and Young, which, in 2002, was made into the movie “We Were Soldiers.” In November 1965, he and his small unit of 450 men were dropped by helicopter into a clearing in the Ia Drang Valley, South Vietnam. Unbeknownst to Moore and his commanders, this clearing was adjacent to more than 4,000 North Vietnamese soldiers who quickly surrounded his unit. Encircled by enemy soldiers with no clear landing zone that would enable them to leave, Moore managed to persevere despite overwhelming odds. His dictum that “there is always one more thing you can do to increase your odds of success,” as well as the courage and determination of his entire command, are credited with this astounding outcome. A sister battalion only 2.5 miles away was massacred.

Importantly, despite the fact that Moore’s spirited defense led to more than a 4-to-1 ratio between North Vietnamese casualties and US casualties in their first major engagement of the war, he considered the battle a draw because the US forces left the area, allowing the North Vietnamese to return and reassert control over the area. Many consider this early battle a microcosm of the war. He was awarded the Distinguished Service Cross for his actions at Ia Drang.

After Vietnam, Moore served in South Korea before rotating back to the United States. Between 1971 and 1973, as commanding general of the Army Training Center at Fort Ord, California, he oversaw extensive experimentation in adapting basic and advanced individual training under Project VOLAR in preparation for the end of conscription and the institution of the modern volunteer Army.

Moore retired from the service in 1977, and he became executive vice president of the Crested Butte Ski Area in Colorado during the 1980s and early 1990s. He and Galloway co-authored a follow-up to their first book, which was published in 2008. Moore and his late wife, Julia Compton Moore, have 5 children and numerous grandchildren. He passed away at his home in Auburn, AL on February 10, 2017. 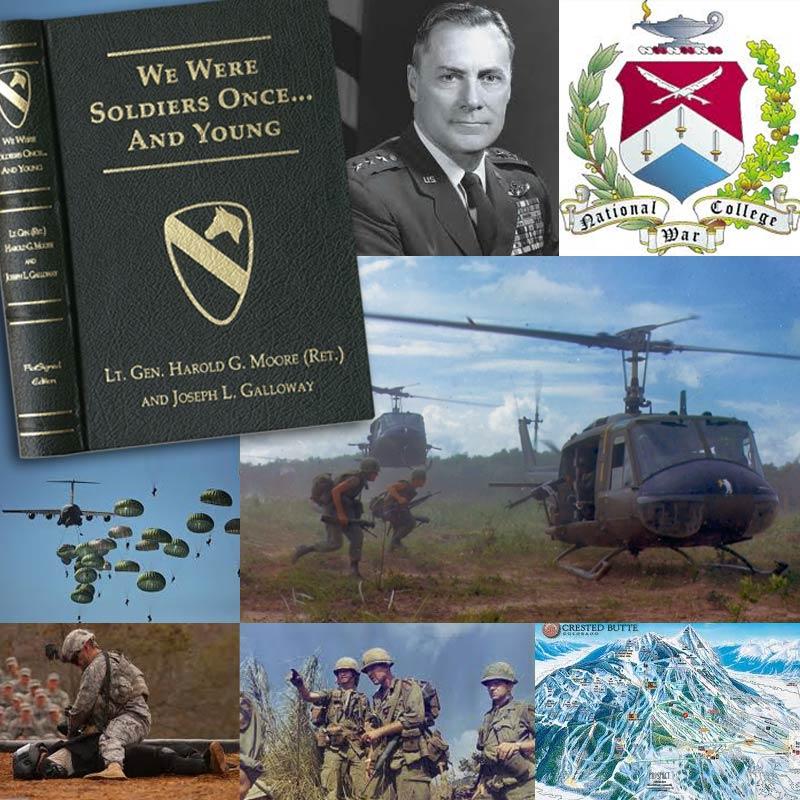