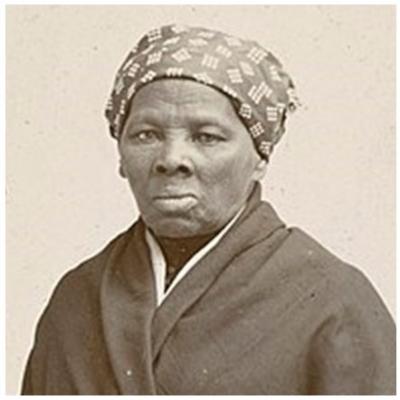 Born, c.1822, into slavery on a slave-breeding plantation on Maryland's Eastern Shore, she was named Araminta “Minty” Ross by her enslaved parents, Ben Ross, and Harriet (“Rit”) Green. Rit’s mother was owned by Mary Pattison Brodess, whose inherited Harriet when Mary’s mother, Atthow Pattison, died in 1797. Rit was a house cook on the plantation and her father, owned by Anthony Thompson, was a skilled woodsman who managed the plantation’s timber work. Her parents married around 1808 and they had nine children: Linah, Mariah Ritty, Soph, Robert, Minty (Harriet), Ben, Rachel, Henry, and Moses. As a young girl, Minty was hired out as a domestic servant. On one occasion, she was sent to a store for supplies and met a slave who had left the fields  without permission. When the overseer asked Minty to help capture the runaway, she refused. Enraged, the overseer threw a two-pound weight at the slave, but it hit her in the head instead. The damage from the blow caused her to suffer from headaches and "sleeping seizures" and narcolepsy.

After her injury, she began experiencing visions and vivid dreams, which she interpreted as revelations from God. These spiritual experiences had a profound effect on her personality and she acquired a passionate faith in God. Although illiterate, she was told Bible stories by her mother and likely attended church with her family. She rejected the teachings of the New Testament that urged slaves to be obedient and found guidance in the Old Testament tales of deliverance. This religious perspective guided her actions throughout her life and reinforced her determination to be free.

Rit struggled to keep her family together as slavery threatened to tear it apart. The Brodess’ sold three of her daughters (Linah, Mariah Ritty and Soph), separating them from the family forever. When a trader from Georgia approached Brodess about buying Rit's youngest son, Moses, she hid him for a month, aided by other slaves and free blacks in the community. When Brodess and "the Georgia man" came toward the slave quarters to seize the child, Rit reportedly told them, "You are after my son; but the first man that comes into my house, I will split his head open." The two men backed away and abandoned the sale.

Anthony Thompson promised to manumit Tubman's father at the age of 45. After Thompson died, his son followed through in 1840, and Tubman's father continued working as a timber estimator and foreman for the Thompson family. Several years later, Tubman contacted a white attorney and paid him five dollars to investigate her mother's legal status. The lawyer discovered that a former owner had issued instructions that Rit and Tubman's mother, like her husband, would be manumitted at the age of 45. The record showed that a similar provision would apply to Rit's children, and that any children born after she reached 45 years of age were legally free, but the families that owned them ignored this stipulation when they inherited the slaves. Being Black, Ben did not have the legal standing to challenge their decision not to follow the instructions in their previous owner’s will. (See Video)

Minty changing her name to Harriet (in honor of her mother) upon her marriage to freeman John Tubman in 1844 and took his name but remained a slave. When the master of her plantation died in 1849, the rumor spread among the slaves that they were to be sold in the Deep South. Harriet and two of her brothers decided to escape. One hundred dollars was offered for her capture. Always in dread of recapture, the brothers returned, but Harriet fixed her gaze on the North Star as guide. With sheer determination, walking by night and hiding by day, she finally arrived in Philadelphia.

Once there, she was befriended by abolitionist and writer William Still, known as the "Father" of the Underground Railroad. His 1872 book, The Underground Railroad Records, has provided details of the stories and methods of almost 650 slaves who excapted to freedom using the Railroad. Still was an active member of the Pennslvania Abolition Society, an organization that was incorporated in 1789, and had members and leaders of both races. It became a model for other anti-slavery groups during this period.

Two years later, she returned to Maryland for her husband, but he had married another woman. She asked him to come join her, but he refused. This disappointing news gave her increased determination to help others to escape bondage and represents the divide between her old life as a slave and her burning desire to be free. She had already rescued a sister and a brother in December 1850, and in December 1851, she had successfully led a party of 11 into Canada. Her work was made more difficult because of the passage of the Fugitive Slave Law of 1850. That law heavily punished abetting escape and forced law enforcement officials—even in states that had outlawed slavery—to assist in their capture. By 1856, Tubman's capture would have brought a $40,000 reward from the South. On one occasion, she overheard some men reading her wanted poster, which stated that she was illiterate. She promptly pulled out a book and feigned reading it. The ploy was enough to fool the men.

By now, Harriet had developed all the necessary characteristics of a "trail boss." If the fugitive became faint-hearted and wanted to return, she did not hesitate to level her pistol at the victim, saying, "You go on or die as a slave." Her reputation as a conductor on the Underground Railroad is best expressed in her own words: " ... I nebber run my train off de track and I nebber los' a passenger."

She successfully used the skills she had learned while working on the wharves, fields and woods, observing the stars and natural environment and learning about the secret communication networks of free and enslaved African Americans to affect her escapes. The famous abolitionist William Lloyd Garrison called her "Moses;" name stuck and later became her major codename on the Underground Railroad.

In 1858, she brought her aged parents from St. Catharines, Canada to freedom and settled them in Auburn, New York, where she had purchased a modest home from U.S. Senator William Henry Seward (who later served as the U.S. Secretary of State from 1861 to 1869). Her parents were old and manumitted, so they did not run the risk of being returned. In fact, Tubman’s mother who spent the winter of 1857 and 1858 in Canada was happy to move; she found Canadian winters unbearable. The antislavery workers of New England and New York helped her raise the funds for the home, which she turned into a home for elderly Negroes after the War. In 1869, she married her second husband, Nelson David, who was a slave in Elizabeth City when he likely escaped through the Underground Railroad c.1861.

A lifelong humanitarian and civil rights activist, she formed friendships with abolitionists, politicians, writers and intellectuals. She knew Frederick Douglass and was close to John Brown and William Henry Seward. She was particularly close with suffragists--Lucretia Coffin Mott, Martha Coffin Wright and Susan B. Anthony. Intellectuals in New England's progressive circles, such as Ralph Waldo Emerson, William Lloyd Garrison, Amos Bronson Alcott, Harriet Beecher Stowe, Franklin Benjamin Sanborn, and Mary Peabody Mann, befriended her, and her work was heralded beyond the United States. She showed the same zeal and passion for the campaign to attain women's suffrage after the American Civil War as she had shown for the abolition of slavery. 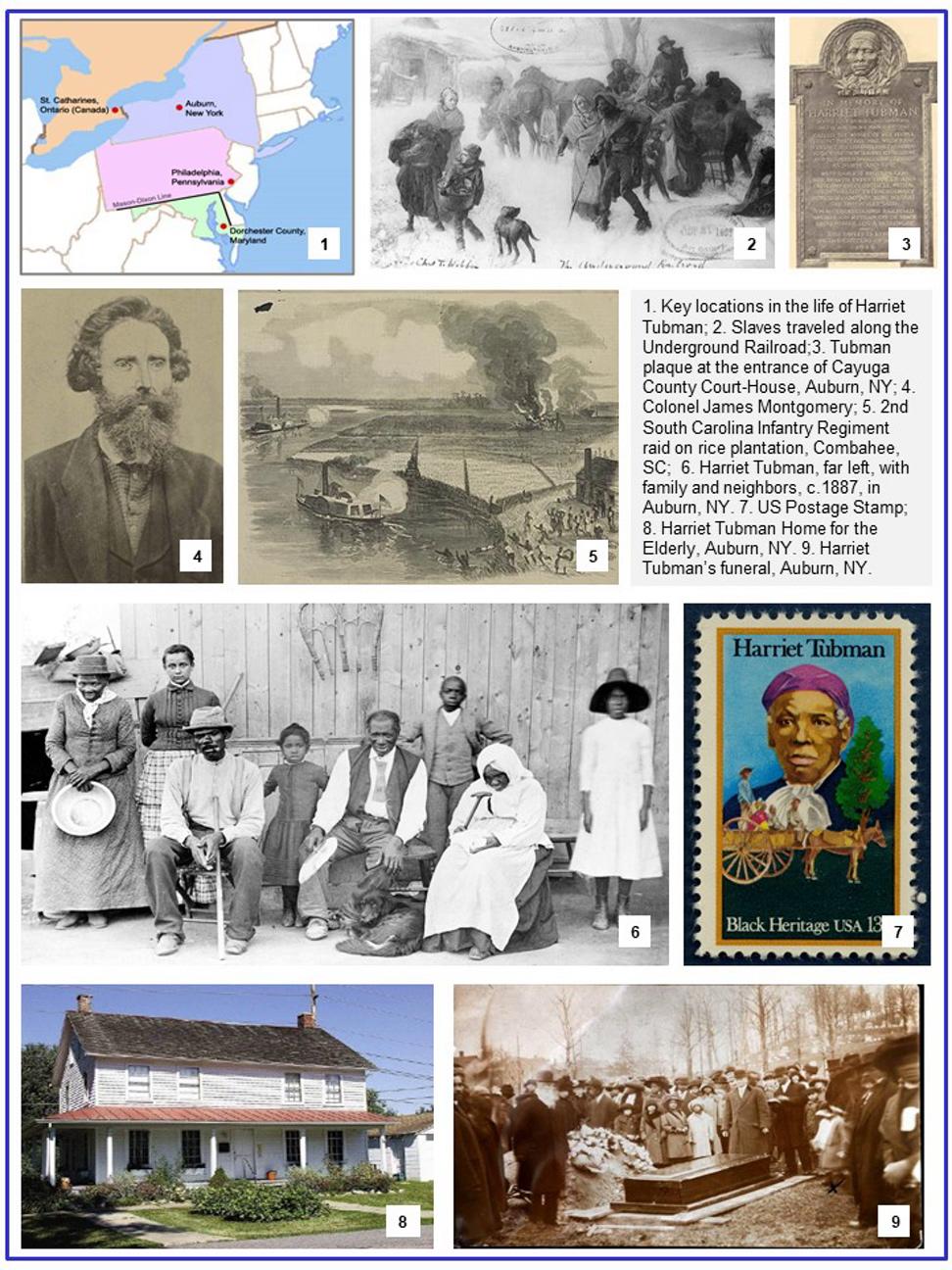 Sponsored By: Editorial staff of Americans All
Printer-friendly version