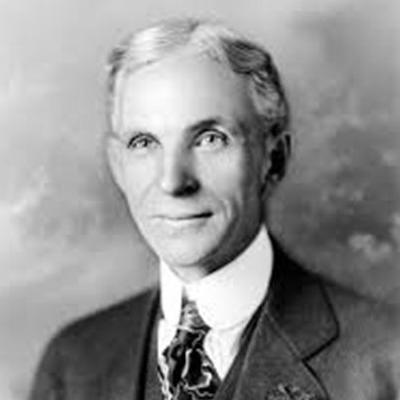 In 1846, a carpenter named William Ford fled his home in Co. Cork, Ireland with scarcely two Pounds in his pocket to escape the poverty of the Great Hunger. He sailed on a coffin ship to Canada with his eyes set on America. He stole across the border and settled in Michigan where he began farming. He married and, in 1863, his wife presented him with a son whom he named Henry. Henry inherited his father’s Irish determination and at 16-years of age, walked for half a day to Detroit with scarcely a dollar in his pocket to escape the poverty of his father's small farm. He found work as a machinist's apprentice and eventually became a full-fledged machinist. In 1890, was hired as a mechanical engineer at the Detroit Edison Company. For years he worked in his spare time to design and build a workable automobile. In 1896, he built a ‘gas buggy’ that he drove around Detroit. Four years later, Thomas Edison told him: Keep on with your engine; I can see a great future.

Ford soon gave up his job at Edison and went into the auto manufacturing business full-time. After two false starts, he formed the Ford Motor Company in 1903. He would soon become one of America’s greatest manufacturers. In 1904, his first full year of operation, Ford sold 1,745 cars. By 1908, with annual sales of 9,000 cars and revenue of $6 million, he introduced the Model T. Five years later, he made industrial history by establishing the assembly line in production.  Before that, it took workers 12.5 hours to complete a new car; by 1920 it took just 93 minutes. The speed and efficiency of the new assembly process turned the automobile from a luxury enjoyed only by the super-rich into an affordable purchase within the grasp of middle-income Americans. Between 1916 and 1927, despite inflation, the price of a Model T dropped from $345 to $290. His success with mass producing the car had an enormous economic impact. He even raised his worker’s wages so that they could afford one. The steel and petroleum industries also saw the demand for their products soar. Ford's revolution also spawned dozens of new industries from filling stations and motels to auto dealerships and repair shops. Of course, one industry was all but wiped out—the horse and buggy manufacturers, but it did improve the environment in cities by reducing the number of horses and their droppings. More important, however, was the social impact of his innovation. The affordable automobile ended the isolation of rural America. It also triggered suburbanization by allowing people to work in a city but live on its outskirts.

As he rose to fame and fortune, Ford never forgot his Irish heritage. He chose the city of Cork—only a few miles from his father's birthplace—as the site for his company's first overseas manufacturing plant; he traveled to Ireland to personally open the facility and was received as a returning son. A story is told that he was approached by a local committee seeking a new wing on a local hospital and Ford pledged $1,000. After reading in the paper that he had pledged $10,000, he contacted the committee and they assured him it was a typographical error and would print a retraction. Not about to be portrayed as miserly, he upped the donation $10,000 on the condition that he be allowed to choose the inscription to adorn the facade of the new wing. They agreed, and he selected a fitting passage from the Bible: I came among my own—and they took me in!

Every year, this first generation Irish-American who’s worth was $600 million when he died in 1947, would wear old shoes on his birthday to remind himself that he had once been poor and might be again. On Dec. 10, 1915, when the one millionth Model T rolled off the assembly line, only 7 years since it was introduced, it was a landmark event in the history of modem manufacturing and a signal that America was on the verge of a new era thanks to an Irish-American who helped to shape America’s future.