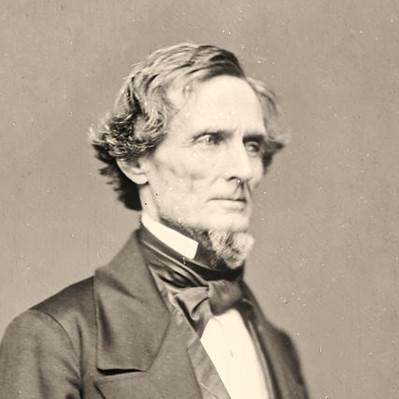 He was born in Kentucky on June 3, 1808, to Samuel Davis of Welch descent and Jane Cook, of Scotch-Irish descent. During his infancy, the family moved to Wilkinson County, Mississippi, the state he always considered true home. He represented Mississippi in Washington and in the Mexican War over a period of fifteen years and spent another four years as president of the Confederate States of America, of which Mississippi was a part.

Davis and Mississippi grew up together. He arrived as a small child before Mississippi’s statehood in 1817, his memories beginning at Rosemont, a modest plantation in Wilkinson County near Woodville. At age eight, he left to attend boarding school at St. Thomas College near Springfield, Kentucky, returned to Mississippi two years later to enter Jefferson College in Adams County, and, in 1823, he enrolled at Transylvania University in Kentucky.

From November 30, 1824, until mid-1833, Jefferson Davis' name on official lists and at times his signature included the middle initial "F." The name is not spelled out in full in any known document. In his story of Davis' life, Hudson Strode claimed he was given the middle name "Finis" because "it seemed unlikely that Jane Davis would ever bear another child." The "Finis" myth has been repeated so often that it has become accepted as fact by many scholarly resources, but there is no evidence for it. All of Jefferson Davis' siblings had traditional names.

In 1824, two important events occurred in his life: his father died, and he entered the United States Military Academy in West Point at the urging of his much-older brother, Joseph E. Davis, whose political connections had secured the appointment. Joseph immediately assumed their father’s role in Jefferson’s life and became his mentor and most loyal supporter, in many ways shaping his destiny. Interestingly, the last known "J. F. Davis" signature is on a note of October 3, 1832, notifying his commanding officer of his acceptance of a furlough. As of the publication of Davis' appointment as second lieutenant of Dragoons on May 4, 1833, the "F." had disappeared from official documents as well. It should also be noted that the "F." was used on Davis' first marriage license (June 17, 1835), although he signed the document without the "F." The initial was not used on his second marriage license ten years later.

At West Point Davis forged enduring friendships with men who became his fellow officers in the Mexican War and became generals on both sides in the American Civil War. Far from being the serious public servant of his adulthood, Davis was a carefree, fun-loving student. He racked up quite a record of demerits – firing his musket from his window, having long hair at inspection, skipping class and chapel, and other misconduct. Davis finished in the bottom third of his class. He was arrested once for being at a local tavern and narrowly escaped dismissal from West Point for participating in the notorious “eggnog riot” in which inebriated cadets became riotous at a holiday party in Davis’s barracks. Despite his misdeeds, he graduated in 1828 as a second lieutenant of infantry and was posted to various frontier stations in Missouri, Illinois, and in Iowa and Wisconsin territories.

Another watershed year came in 1835. He had not yet decided on a career and strongly considered pursuing legal studies, but instead, he married and left the army. His bride was Sarah Knox Taylor, the comely, youngest daughter of Zachary Taylor, one of his superior officers and a future United States president. The Taylors opposed the marriage, knowing military family life was beset with difficulties, but they soon realized that their daughter and Davis were determined to marry. After a June wedding, the newlyweds planned to begin life together on land provided by his brother Joseph. Then, tragedy struck. Sarah Davis died of malaria in September at Locust Grove plantation near Bayou Sara, Louisiana. Davis himself was desperately ill and was so devastated by sorrow that he became a virtual hermit at his Brierfield plantation.

Named for the tangled wilderness it was in 1835, Brierfield was about 800 acres, located on Davis Bend on the Mississippi River south of Vicksburg, Mississippi. For eight years, Davis worked alongside his slaves to improve the place, relying mainly on them and his brother Joseph, his closest neighbor, for companionship. In 1838, the young widower traveled to Washington, D. C., for a few months, thinking he might return to the army, but he soon returned to Brierfield. On the adjoining Hurricane plantation, Joseph Davis maintained a luxurious lifestyle, had an excellent library, and was always in touch with local and national politics. He had extensive connections with important people and was a worthy partner in debating events of the day. Five years later, prompted by his brother, Jefferson Davis entered politics for the first time.

Davis ran unsuccessfully for the Mississippi House of Representatives as a Democrat in a predominantly Whig county. Nevertheless, he gained valuable experience on the campaign trail and the following year traveled and spoke for the Democratic slate. In 1845 he was rewarded with election to the U.S. Congress and took his new wife with him to Washington.

Joseph Davis had engineered his brother’s match to Varina Banks Howell, the well-educated and vivacious daughter of a Natchez businessman. Her mother was only two years older than the groom, and once again, the bride’s parents were less than enthusiastic. The two wed at The Briars, the Howell family home. It was a marriage destined to last over forty tumultuous years. The Davises had four sons and two daughters, born between 1852 and 1864.

Jefferson Davis was a conscientious congressman and an avid participant in House debates, but he was only in Washington for seven months before duty to his state led him to a position he did not seek. He was elected colonel of the First Mississippi Regiment, which was headed to the war with Mexico. By subjecting his men to strict discipline and military rules, he molded them into an effective fighting unit that distinguished itself in the battles of Monterrey (September 1846) and Buena Vista (February 1847), both victories against a numerically superior foe. Davis was wounded at Buena Vista but refused to leave the battlefield until success was assured.

Returning to Mississippi as a wounded war hero, he was a popular choice to fill a vacancy in the U. S. Senate in 1847. When Congress was not in session, Davis traveled the length and breadth of Mississippi on speaking tours. At the last minute of a crucial governor’s contest, the Democratic State Rights candidate John A. Quitman withdrew from the race, and Davis was asked to become the Democratic candidate. Davis accepted the nomination and resigned his seat in the Senate, but lost in the November election to Henry Stuart Foote, the Union Party candidate. It was the last time he ever lost a bid for office and he seemed glad to relinquish public life for a while. He resumed planting at Brierfield and was surprised when a Mexican War friend, President-elect Franklin Pierce, asked him to head the War Department, now called the Department of Defense. 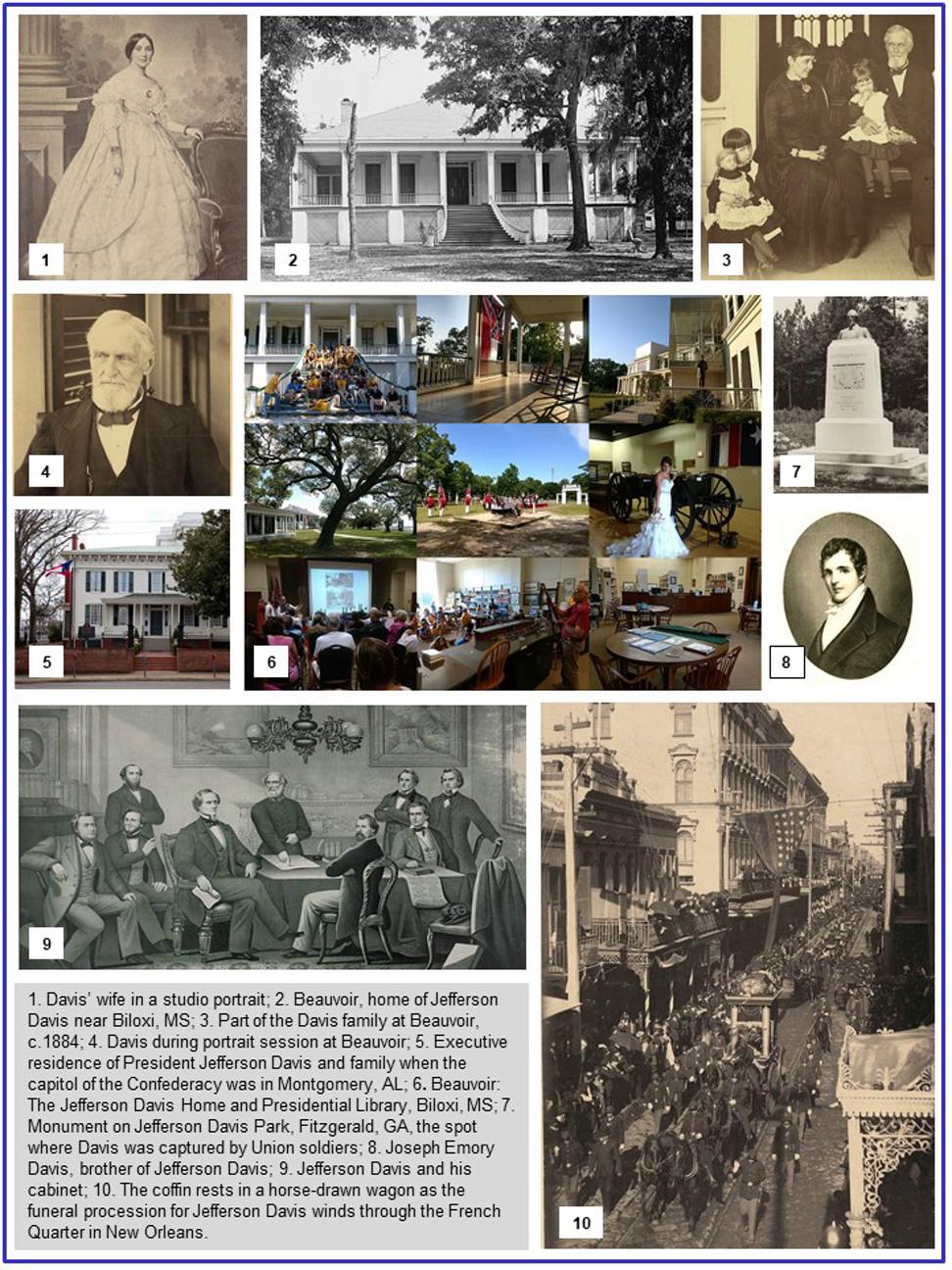