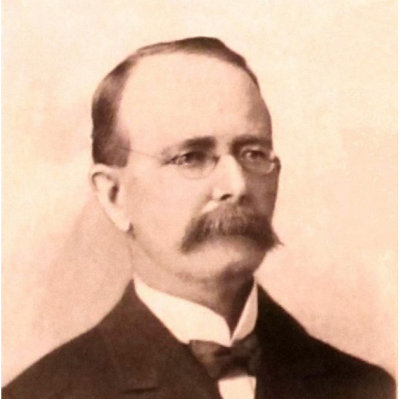 His name was John Philip Holland and he was born in Liscannor, Co. Clare, Ireland, on February 24, 1841. He was only three when the potato failure devastated his country. He survived but suffered poor eyesight for the rest of his life. His father was a member of the Coast Guards and young John inherited a love of the sea.  Although his poor eyesight prevented him from following in his father’s footsteps, he developed an interest in ship design.

John attended St. Macreehy's National School during his youth and later, perhaps, the Christian Brothers School in Ennistymon. His mother, Mary Scanlon, moved the family to Limerick in 1853 and here he came under the influence of Brother Dominic Burke, a science teacher, who greatly encouraged John’s interest in ships. By the end of the 1850's, John had drawn his first plans for a submarine, which he never radically changed. When he left school, he joined the Christian Brothers as a school teacher.

His love of ships led him to study the unsuccessful attempts of Bourne, Bushnell, and Fulton at underwater sailing. At the end of 1862, he read an account of the first combat between armored ships: the historic confrontation of the Monitor and Virginia in the American Civil War. He noted at the time that the English were nervous because their country's strength lay in their wooden ship Navy which was now vulnerable. In his spare time, young John began to design an ironclad that would sail beneath the waves, undetected by surface ships.

Then, in another action, the Union ship Housatonic was sunk by the underwater craft Huntley. Though the Confederate sub was unstable and sank with its entire crew, it verified the importance of Holland's ideas.  Unable to promote interest in Ireland, he left the Christian Brothers and came to America in 1872.  After a short stay in Boston, he found employment in St. John's School, Paterson, New Jersey. In 1875, he offered his plan for a submersible boat to the U.S. Navy, but it was rejected as a “fantastic scheme.”  He was sure if he could raise the money for a prototype vessel, he could convince the skeptics, but money was hard to find.

In 1876, as his brother and other patriotic young Irishmen had done before him, Holland joined the Fenian Brotherhood, a rebel organization dedicated to freeing Ireland from British rule. Here he found interest in his plans for a weapon that could sink the British Navy. Delighted with the prospect of striking a blow for Ireland, the Fenians financed Holland's project. He constructed a prototype to demonstrate his theories and in 1878 the 14-foot, one-man, Holland I slipped beneath the waves of the Passaic River in New Jersey. Impressed, the Fenians provided $23,000.00 for a full-sized version along with a mother vessel for launch and retrieval.

In 1881, Holland completed a 31-foot, 3-man submarine of 20-tons displacement complete with a torpedo tube and fittings for armaments.  Spectators stared as the sub went through its trials, and newsmen dubbed it ‘the Fenian Ram’ in recognition of its origin and purpose. The British nervously watched the subs progress.  Holland continued to test and refine his design, and in 1882, an impatient Fenian leader, John Breslin, stole the Ram and Holland's third hull which was then under construction. They were taken to New Haven to be launched; unfortunately, with no knowledge of their operation, they sank and the project was abandoned.

Holland again tried the U.S. Government, and again was rejected. With his own limited assets and borrowed money, he continued his designs on paper, trying to interest financiers in his invention. In 1895, he finally won a $150,000. U.S. Navy contract to build a submarine, but the Navy insisted on alterations which Holland said would make it a failure. So, while building a sub with their modifications, the headstrong inventor also built the 53-foot, 63-ton, Holland VI to his own specifications. After the predicted failure of the Navy design, Holland floated out his alternative vessel. The trials took place at New Suffolk on Long Island, NY and were a total success. In 1900, Holland VI became the U.S.S. Holland—the first American submarine, and the Holland Torpedo Boat Company received an order for six more.

Although the brainchild of the tenacious Irish immigrant became the prototype for the greatest submarine fleet in the world, success came too late. He was deeply in debt and couldn't finance the order. Financier Isaac Rice and others backed Holland’s successful Company and it became the Electric Boat Company in Groton, Connecticut and later a division of General Dynamics. Holland was moved ever lower in the company, ending up as only one of a staff of designers. In 1904, his financiers tried to retire him, but he refused. Instead, he tried to form a rival company, but litigation brought against him by the Electric Boat Company over patent rights, prevented him from raising capital. Rice and the others dealt with both the U.S. and British governments, selling them the original patents much to the chagrin of their inventor and the Fenian Brotherhood.

Holland spent his remaining years in costly, but unsuccessful, litigation trying to reclaim his patents. On August 12, 1914, he died in obscure poverty in Newark, N.J., leaving his wife Margaret with five children. As he lay dying, the Germans and British were readying their respective Navies for war and the eyes of both fleets were submarines, built with Holland's principles 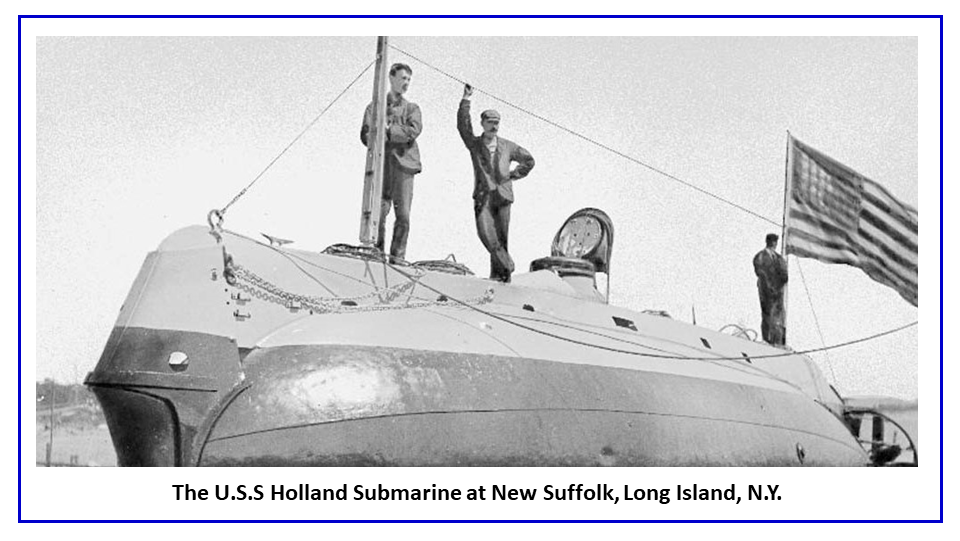