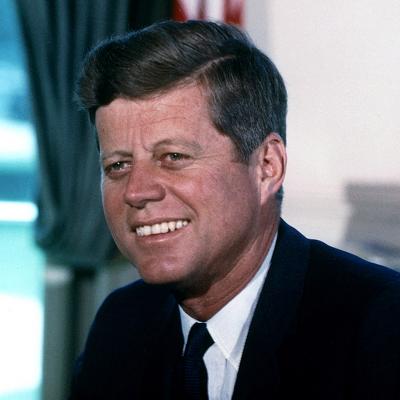 John Fitzgerald Kennedy was named in honor of his mother Rose’s father, John Francis Fitzgerald, the Boston Mayor popularly known as Honey Fitz. Before long, family and friends called this small blue-eyed baby, Jack. He was not a very healthy baby, and Rose recorded on his notecard [which she kept for each child] the childhood diseases from which he suffered, such as: "whooping cough, measles, chicken pox." On February 20, 1920, he became sick with scarlet fever, a highly contagious and then potentially life-threatening disease. His father, Joseph Patrick Kennedy, was terrified that little Jack would die. Mr. Kennedy visited his son in the hospital every day, and, fortunately, about a month later Jack took a turn for the better and recovered. But he was never very healthy, and because he was always suffering from one ailment or another his family used to joke about the great risk a mosquito took in biting him—with some of his blood, the mosquito was almost sure to die!

Jack grew up in a very comfortable environment, the son of a very successful businessman. The Kennedys had everything they needed and more. At the end of the school year, the children would go to their summer home in Hyannis Port on Cape Cod where they enjoyed swimming, sailing, and playing touch football. They played hard, and they enjoyed competing with one another. Joseph Sr. encouraged this competition, especially among the boys—and Jack would usually get the worst of it.

Jack was very popular at Choate, a boarding school for adolescent boys in Connecticut. He played tennis, basketball, football, and golf and also enjoyed reading. His friend Lem Billings remembers how unusual it was that Jack had a daily subscription to the New York Times. Jack had a "clever, individualist mind," his Head Master once noted, though he was not the best student. He did not always work as hard as he could, except in history and English, which were his favorite subjects.

After graduating from Choate in 1936, he entered Harvard where his older brother Joe was already a student. He was not as good an athlete as Joe, but he had a lot of determination and perseverance. Unfortunately, one day while playing football, he ruptured a disk in his spine. Jack never really recovered from this accident and his back continued to bother him for the rest of his life.

His two eldest boys were attractive, agreeable and intelligent, and their father had high hopes for them both. However, it was Joe who told everyone when he was a young boy that he would be the first Catholic to become President. No one doubted him for a moment. Jack, on the other hand, seemed somewhat less ambitious. He was active in student groups and sports and he worked hard in his history and government classes, though his grades remained only average. Late in 1937, Joseph Kennedy was appointed U.S. Ambassador to England and moved there with his whole family—except Joe and Jack who were at Harvard. Because of his father’s job, Jack became very interested in European politics and world affairs. After a summer visit to England and other European countries, Jack returned to Harvard more eager to learn about history and government and to keep up with current events.

Joe and Jack frequently received letters from their father about the conflicts and tensions that everyone feared would soon blow up into a full-scale war. Adolph Hitler ruled Germany and Benito Mussolini ruled Italy. They both had strong armies and wanted to take land from other countries. On September 1, 1939, Germany invaded Poland and World War II began. By this time, Jack was a senior at Harvard and decided to write his thesis on why Great Britain was unprepared for war with Germany. It was later published as a book called Why England Slept.

Soon after graduation, both Joe and Jack joined the Navy. Joe was a flyer and sent to Europe. Jack was made Lieutenant and assigned to the South Pacific as commander of a 12-man patrol torpedo boat, the PT-109, with the mission of stopping Japanese ships from delivering supplies to their soldiers.  On the night of August 2, 1943, a Japanese destroyer suddenly became visible and was heading toward them at full speed. Despite taking evasive action, the larger Japanese warship rammed the PT-109, splitting it in half and killing two of the crew. The others managed to jump off as their boat went up in flames. Kennedy was slammed hard against the cockpit, once again injuring his weak back. Crew member Patrick McMahon was seriously hurt; in the darkness, Kennedy managed to find McMahon and haul him back to where the other survivors were clinging to a piece of the boat that was still afloat. At sunrise, Kennedy led his men toward a small island several miles away. Six days later, two native islanders found them and went for help, delivering a message Jack had carved into a piece of coconut shell. The next day, the PT-109 crew was rescued. Jack’s brother Joe was not so lucky. He died a year later when his plane blew up during a dangerous mission in Europe.

When Jack returned home, he was awarded the Navy and Marine Corps Medal for his leadership and courage. With the war finally coming to an end, Jack had considered becoming a teacher or a writer; but with Joe’s tragic death, suddenly everything changed. After serious discussions with Jack about his future, his father convinced him to run, as a Democrat, for Congress in Massachusetts' eleventh congressional district, where he won in 1946. This began Jack’s political career. Kennedy served three terms (six years) in the House of Representatives, and in 1952, was elected to the U.S Senate.

Soon after being elected senator, the 36-year-old Kennedy married 24-year-old Jacqueline Bouvier, a writer with the Washington Times-Herald. Unfortunately, early in their marriage, Jack had two serious operations on his back. While recovering from surgery, he wrote a book about several U.S. Senators who had risked their careers to fight for the things in which they believed. The book, called Profiles in Courage, was awarded the Pulitzer Prize for biography in 1957. That same year, the Kennedys’ first child, Caroline, was born.

Kennedy was becoming a popular politician. In 1956, despite not being picked to run for vice president, he decided to run for president in the next election. After successfully campaigning, the Democratic party nominated him as its 1960 candidate for president with Texas Senator Lyndon B. Johnson, to run as vice president. Kennedy defeated the Republican Vice President Richard M. Nixon in a very close race, and at the age of 43, was the youngest man elected president and the first Catholic. Before his inauguration, his second child, John Jr., was born. Kennedy liked to call him John-John.

Kennedy was sworn in as the 35th president on January 20, 1961. In his inaugural address (Video) he stated: "Ask not what your country can do for you, ask what you can do for your country." He also asked the nations of the world to join together to fight what he called the "common enemies of man: tyranny, poverty, disease, and war itself." The Kennedy family brought a new, youthful spirit to the White House. They believed that the White House should be a place to celebrate American history, culture, and achievement, and invited artists, writers, scientists, poets, musicians, actors, and athletes to visit them. Jacqueline Kennedy also shared her husband's interest in American history. Gathering some of the finest art and furniture the U.S. had produced, she restored all the rooms in the White House to make it a place that truly reflected America’s history and artistic creativity. 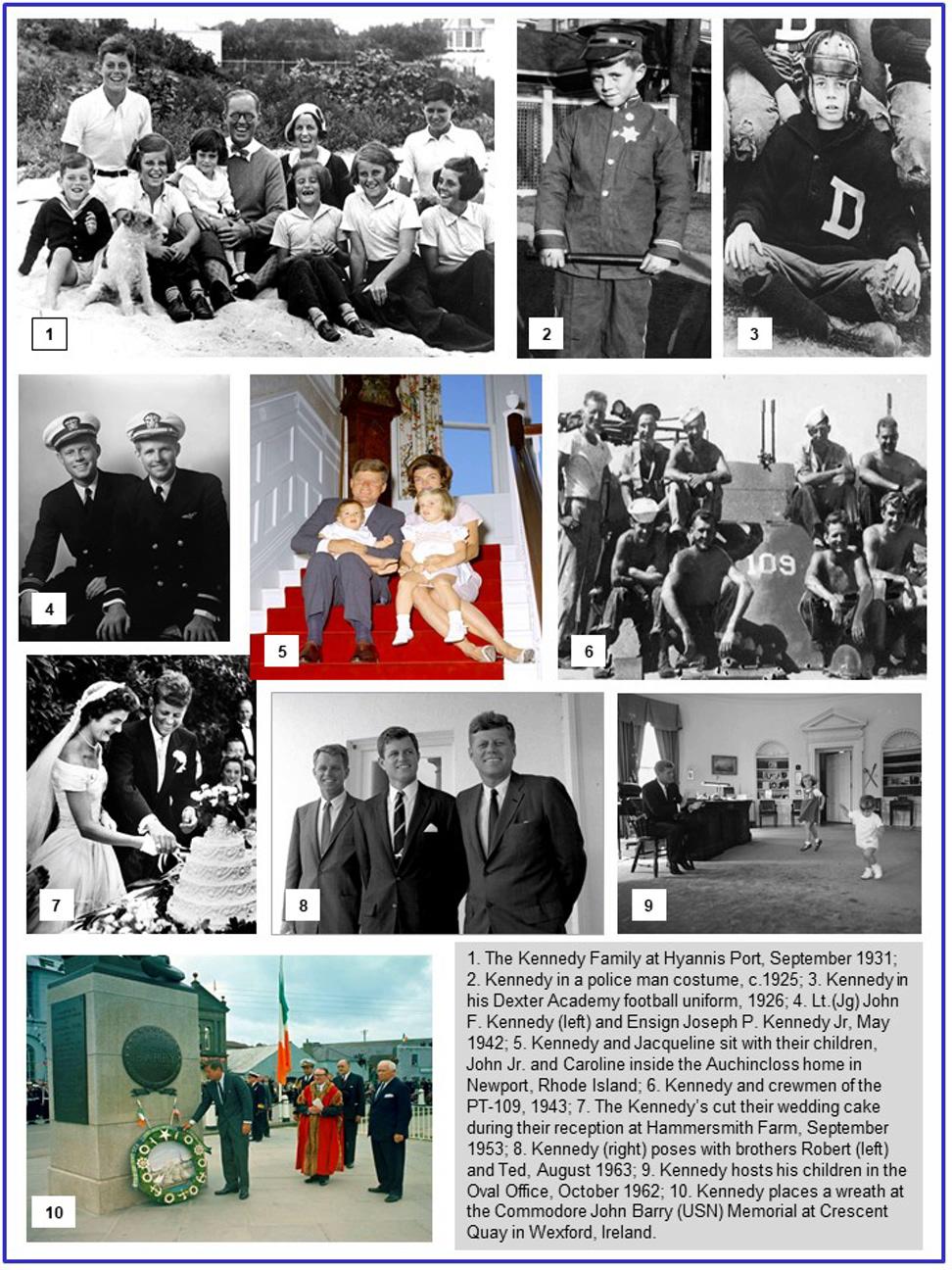