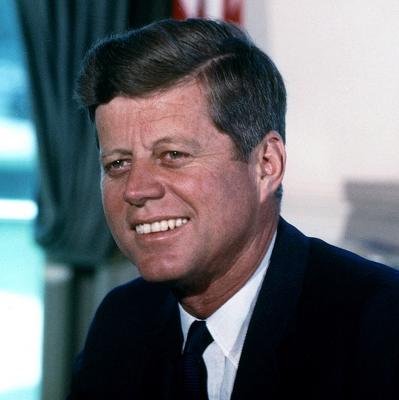 On January 20, 1961, John Fitzgerald Kennedy was sworn in as America’s 35th president. He and his running mate, Texas Senator Lyndon B. Johnson, defeated Republican Richard M. Nixon in a very close race. In his inaugural address (Video) Kennedy stated: "Ask not what your country can do for you, ask what you can do for your country." The Kennedy family brought a new, youthful spirit to the White House. They believed that the White House should be a place to celebrate American history, culture, and achievement, and invited artists, writers, scientists, poets, musicians, actors, and athletes to visit them.

He created the Peace Corps, enabling Americans to volunteer anywhere in the world where assistance is needed, in areas such as education, farming, health care, and construction. He also wanted the U.S. to lead in exploring space, but the Soviet Union was ahead. He was the first president to ask Congress to approve more than 22 billion dollars for Project Apollo, which had the goal of landing an American man on the moon before the end of the decade.

But the possibility of nuclear war between the U.S. and the Soviet Union was growing. Since World War II, there had been a lot of anger and suspicion between the two countries, but never any shooting between their troops. This 'Cold War', unlike any other war the world had seen, was really a struggle between the Soviet Union's communist system of government and the democratic system of the U.S. Because of this mutual distrust, both countries spent enormous amounts of money building nuclear weapons. War almost became a reality because of activates related to Cuba.

In 1959, Fidel Castro came to power in an armed revolt that overthrew Cuban dictator Fulgencio Batista. The U.S. government distrusted Castro and was wary of his relationship with Nikita Khrushchev, the leader of the Soviet Union.

Before his inauguration, Kennedy was briefed on a plan by the Central Intelligence Agency (CIA), developed during the Eisenhower administration in March 1960, to train Cuban exiles for an invasion of their homeland. The plan anticipated that the Cuban people and elements of the Cuban military would support the invasion, overthrow Castro and establish a non-communist government friendly to the U.S.

The CIA set up training camps in Guatemala, and by November the operation had trained a small army for an assault landing and guerilla warfare. José Miró Cardona led the anti-Castro Cuban exiles in the U.S. A former member of Castro's government, he was the head of the Cuban Revolutionary Council, an exile committee. Cardona was poised to take over the provisional presidency of Cuba if the invasion succeeded.

Despite government efforts to keep the invasion plans covert, it became common knowledge among Cuban exiles in Miami. Through Cuban intelligence, Castro learned of the guerilla training camps in Guatemala as early as October 1960, and the press reported widely on events as they unfolded.

Shortly after his inauguration, in February 1961, Kennedy authorized the invasion plan but wanted to disguise U.S. support. The landing point at the Bay of Pigs was part of the deception. The site was a remote swampy area on the southern coast of Cuba, where a night landing might bring a force ashore against little resistance and help to hide any U.S. involvement. Unfortunately, the landing site also left the invading force more than 80 miles from refuge in Cuba's Escambray Mountains, if anything went wrong.

The original invasion plan called for two air strikes against Cuban air bases. A 1,400-man invasion force would disembark under cover of darkness and launch a surprise attack. Paratroopers dropped in advance of the invasion would disrupt transportation and repel Cuban forces. Simultaneously, a smaller force would land on the east coast of Cuba to create confusion. The main force would advance across the island to Matanzas and set up a defensive position. The United Revolutionary Front would send leaders from South Florida and establish a provisional government. The success of the plan depended on the Cuban population joining the invaders.

The first mishap occurred on April 15, 1961, when eight bombers left Nicaragua to bomb Cuban airfields. The CIA had used obsolete World War II B-26 bombers and painted them to look like Cuban air force planes. The bombers missed many of their targets and left most of Castro's air force intact. As news broke of the attack, photos of the repainted U.S. planes became public and revealed American support for the invasion. President Kennedy canceled a second air strike.

On April 17, the Cuban-exile invasion force, known as Brigade 2506, landed at beaches along the Bay of Pigs and immediately came under heavy fire. Cuban planes strafed the invaders, sank two escort ships, and destroyed half of the exile's air support. Bad weather hampered the ground force, which had to work with soggy equipment and insufficient ammunition.

Over the next 24 hours, Castro sent roughly 20,000 troops toward the beach, and the Cuban air force controlled the skies. As the situation grew increasingly grim, Kennedy authorized an "air-umbrella" at dawn on April 19—six unmarked American fighter planes took off to help defend the brigade's B-26 aircraft flying. But the B-26s arrived an hour late, most likely confused by the change in time zones between Nicaragua and Cuba. They were shot down by the Cubans, and the invasion was crushed later that day.

Some exiles escaped to the sea, while the rest were killed or rounded up and imprisoned by Castro's forces. Almost 1,200 members of Brigade 2506 surrendered, and more than 100 were killed. The brigade prisoners remained in captivity for 20 months, as the U.S. negotiated a deal with Castro. Attorney General Robert F. Kennedy made personal pleas for contributions from pharmaceutical companies and baby food manufacturers, and Castro eventually settled on $53 million worth of baby food and medicine in exchange for the prisoners.

Failure at the Bay of Pigs did not deter the Kennedy administration from seeking ways to topple Castro. In November 1961, Operation Mongoose was created to coordinate these efforts. This was not a strictly CIA operation—General Edward Lansdale was tasked with coordinating activities between the CIA, Defense Department, and State Department. The Special Group (Augmented) oversaw the program at the White House, and Robert Kennedy played a very active role.

Mongoose entailed a wide range of activities, including intelligence collection, sabotage operations, searching for leaders within Cuba who could overthrow Castro, and more. The Northwoods operation, which contemplated faked and real terrorist activities which could be blamed on Castro and used as a provocation for invasion, were developed in this period with Major General Edward Lansdale's involvement.

These activities culminated the creating the Cuban Missile Crisis of October 1962. This was a direct and dangerous confrontation between the U.S. and the Soviet Union and was the moment when the two superpowers came closest to nuclear conflict. The crisis was unique in many ways, featuring calculations and miscalculations as well as direct and secret communications and miscommunications between the two sides. The dramatic crisis was also characterized by the fact that it was primarily played out at the White House and the Kremlin level with relatively little input from the respective bureaucracies typically involved in the foreign policy process.

After the failed U.S. attempt to overthrow the Castro regime in Cuba with the Bay of Pigs invasion, and while the Kennedy administration planned Operation Mongoose, in July 1962 Soviet premier Nikita Khrushchev reached a secret agreement with Cuban premier Fidel 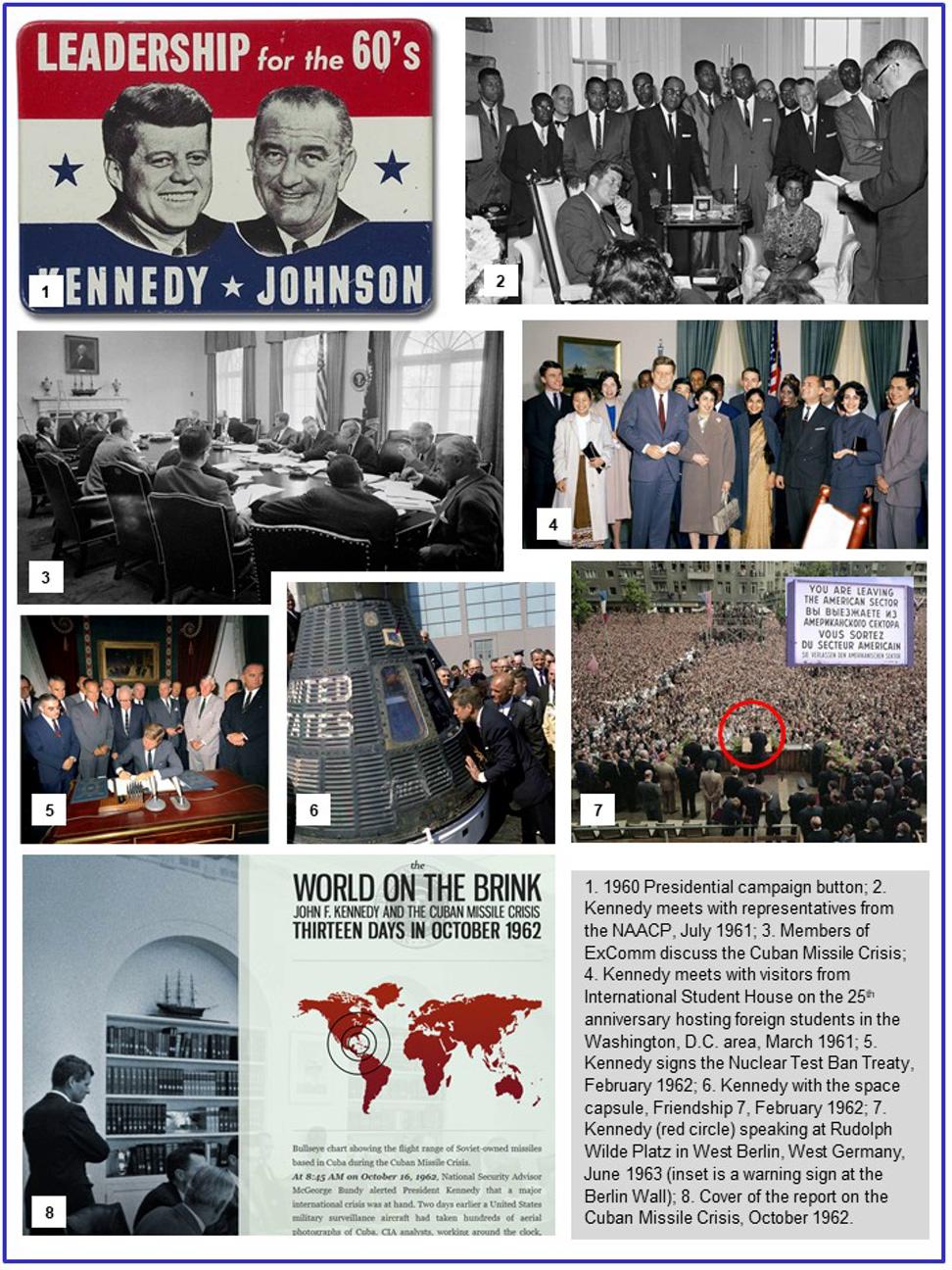