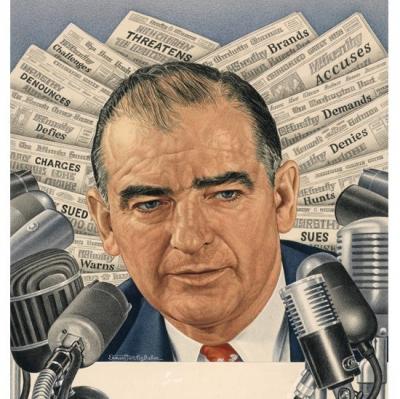 Early summer, 1954, was a heady time in Washington D.C. In the weeks following the historic Supreme Court ruling against segregation in public schools, the anti-communism crusade of Irish American Senator Joseph Raymond McCarthy began to unravel. Ten days after the dramatic humiliation of McCarthy on national television, U.S. Senator Lester C. Hunt shot himself in his office in the Senate Office Building—a victim of McCarthy’s witch-hunt. Three days later, on June 22, 1954, CBS newscaster Don Hollenbeck, who had been branded a communist following criticism of McCarthy on air, took his own life. There were many other victims of what had become a national panic.

Until the election of John Fitzgerald Kennedy as President, no other politician of Irish extraction had achieved a national impact comparable with McCarthy’s in twentieth century America. McCarthy’s grandfather Stephen had left his native Tipperary after the Great Hunger and eventually settled in northeast Wisconsin where a small Irish farming community evolved in a region that was popular with German immigrants. Joseph McCarthy was one of nine children of a devoutly Irish Catholic farm family. He had left school at the age of 14 and had returned to education in his late teens. Following wartime service in the Marine Corps, McCarthy at the age of 38, was elected a United States Senator in 1946 as a Republican because he had reckoned that he had a better chance of winning, than as a Democrat. The renowned American historian William Manchester who died on June 1, 2004, has written that McCarthy was ‘a prime specimen of what has been called the Black Irish: the thickset, bull-shouldered, beetle-browed type found on Boston’s Pier Eight and in the tenements of South Chicago. McCarthy’s ‘Irishness’ and anticommunism had endeared him to the Kennedy family. John Kennedy had called him ‘a great American patriot’ and his brother Bobby had chosen him as godfather for his first child and had worked as a counsel on McCarthy’s Congressional investigations’ committee.

In his early years as a Senator, McCarthy had little impact. He drank heavily, gambled and acted as a paid lobbyist for several business corporations. Then as the 1952 election was drawing closer, he found a cause. The panic about communist success in Eastern Europe, the fall of Nationalist China and the Soviet atom bomb test following betrayal of American nuclear secrets, had set off a firestorm of national insecurity. Against that backdrop, McCarthy had seen how Congressman Richard Nixon had gained national prominence through the investigation of a charge of espionage against a State Department employee and on February 9, 1950 in Wheeling, West Virginia, McCarthy launched his crusade. Waving his laundry list, he claimed to have the names of 205 known communists who were State Department employees. In the succeeding days as he continued a speaking tour, the number changed and as he was challenged to produce credible evidence in the remaining weeks of February, McCarthy could not name one current suspect employee in the State Department. According to William Manchester, McCarthy had phoned a Chicago Tribune journalist prior to his Wheeling speech and had been told of a 1946 letter from the Secretary of State in which he had stated that an employee screening of individuals who had been transferred from wartime agencies had recommended against the permanent employment of 284 for various reasons. Of these, 79 had been discharged. McCarthy subtracted 79 from 284 and got his magical figure.

The bonfire that he’d lit, complete with lies, exaggerations and Senate investigations of his wild charges including one which dismissed them as a ‘fraud’ and a ‘hoax,’ should have undermined his credibility but he soon became the most powerful American politician after the President. He was sustained by support from powerful media and wealthy pressure groups. Other politicians wilted in the face of McCarthy’s popularity and the Washington Post was one of the few significant newspapers that challenged him head on. It’s cartoonist Herbert Block (‘Herblock’) gave a name to the tactics used by the junior Senator from Wisconsin. Block produced a cartoon with ‘McCarthyism’ crudely lettered on a barrel of mud supported by ten mud-bespattered buckets. While the Soviets had a long-term program of infiltration in the United States, tarring anyone with being a sympathizer of what could be termed a left-wing cause was virtually a sentence of death. Loyalty programs and blacklists became important features of this shameful period and hundreds of artists-writers and entertainers-were a particular target. Labelled communist sympathizers, passports were taken away and some were jailed for refusing to give the names of alleged communists. In these years of hysteria, communists were not the only targets.

McCarthy had claimed that there were ‘links between homosexuality and communism’ and this was one issue where he had plenty competition from other legislators. A Senate subcommittee launched an investigation after a Washington D.C. vice squad officer told Senators that there were 5,000 ‘perverts’ in Washington, 4,500 of them employed by government agencies. It is ironic that apart from questions about McCarthy’s own sexuality, it was the favors that his young chief counsel Roy Cohn had sought for a male friend who had been drafted into the US Army that had set the stage for McCarthy’s ultimate political destruction.

The Army-McCarthy Hearings began in Washington D.C. in April 1954 with gavel-to-gavel coverage on national television. The purpose of the inquiry was to examine charges made by both sides including McCarthy’s claim that a spy ring existed in the Army Signal Corps. McCarthy’s rude outbursts and his ‘point of order’ interjections, which became a national catchphrase, exposed him as a fraud and bully. On Wednesday, June 9, 1954, the hearings hit an emotional climax when McCarthy who was riled by innuendo about the nature of the relationship between Cohn and his enlisted Army friend, claimed that a young lawyer in the office of Army counsel Joseph Welch had been a member of an organization that was the legal bulwark of the Communist Party. ‘Until this moment, Senator, I think I never gauged your cruelty or recklessness…Have you no sense of decency, sir at long last? Have you no sense of decency?’ (Video) Welch asked and then cut off McCarthy as he tried to intervene. Welch called for the next witness and the public gallery burst into applause. The hearings were adjourned and as a bewildered McCarthy sat alone at the coffin-shaped table in the Senate Caucus Room, he held up his hands and asked, ‘What happened?’ 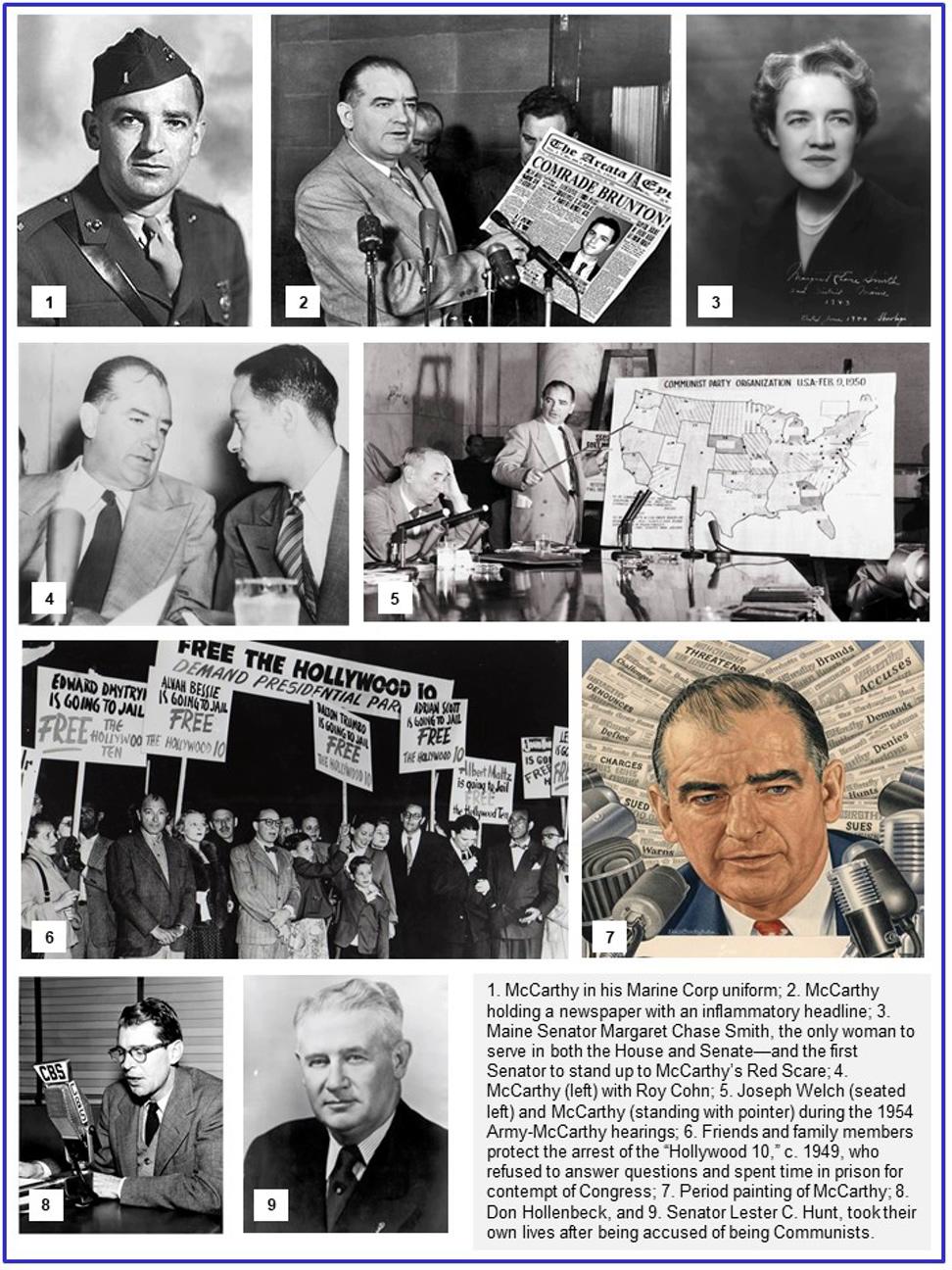