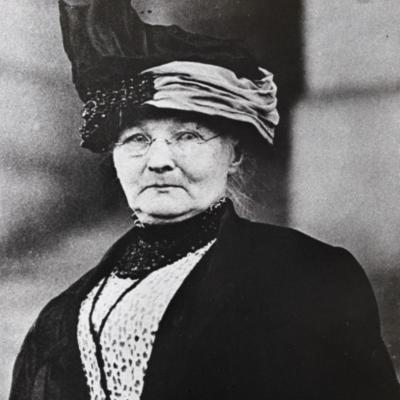 While Mary Harris Jones claimed May 1, 1830, as her birthday, some of her biographers say it could have been August 1, 1837, but few would argue with this feisty little Irish lady for, although she was known as the Miner’s Angel, she was also known as the Mother of All Agitators. Born in Cork City, Ireland, her family fled the Great Hunger to Toronto, Canada, when she was a child.  She trained as a teacher at Toronto Normal School from 1858-59, and worked briefly as a teacher and as a dressmaker.  In 1861, Mary married George Jones, an iron molder and union organizer in Memphis, Tennessee. The couple had four children—but all four children and her husband died in the yellow fever epidemic of 1867. Mary Jones moved to Chicago, where she worked as a dressmaker until her shop was destroyed in the Chicago Fire of 1871.

After her second heartbreaking setback, this courageous Cork lady took a job as an organizer for the Knights of Labor and the United Mine Workers union. This was a hard time for labor in a tycoon-dominated America where politicians and police controlled the workplace for the giants of industry. In 1876-77, 21 miners in PA were given mock trials and executed for union activities as Molly Maguires, a name generated to paint them as criminal conspirators. In fact, the only organization they belonged to was the Ancient Order of Hibernians.

Mary Harris Jones was an effective speaker and soon became known as ‘Mother Jones’ to the miners, whom she called ‘her boys’. Her success in organizing mine workers and their families against the mine owners was phenomenal. By her late 50s, this petite, white-haired, grandmotherly-looking lady was a radical labor organizer.  When she was called ‘the grandmother of all agitators’ by a local politician she replied, “I hope to live long enough to be the great-grandmother of all agitators!” She even organized strikers' wives because she felt that if the wife didn’t share the husband’s beliefs, the husband wouldn’t remain committed.

In 1902, she was arrested and put on trial for ignoring a West Virginia state injunction banning meetings by striking miners. The District Attorney said at her trial, "There sits the most dangerous woman in America. She crooks her finger and 20,000 workers are content to lay down."  According to Clarence Darrow, she was "one of the most forceful and picturesque figures of the American labor movement". When asked for her address, she told one inquisitor, “my address is on the sole of my shoes, it travels with me!”

For many months at a time she lived amid the most desolate regions of West Virginia’s Appalachian Mountains, organizing the half-starved miners, making her home in their wretched cabins, sharing her meager belongings with their families, nursing the sick and cheering the depressed. Not limited to organizing coal miners, she did likewise in the silk mills of Pennsylvania. When she noticed that many of the children had missing fingers and other disabilities from accidents in the mills and mines, she tried to publicize the terrible working conditions relating to child labor. The newspapers refused to carry her story noting that the mill and mine owners held stock in their papers. She replied, “Well, I’ve got stock in these children and I’ll arrange my own publicity.”  In 1903, she organized 200 children from the mills and mines, many of whom were maimed and carrying banners demanding "We want to go to School and not the mines!"  With a handful of chaperones, she led the ‘Children's Crusade’ (see photo below) on a march from Philadelphia, Pennsylvania to President Teddy Roosevelt’s summer home at Oyster Bay, Long Island. The march took several weeks and in every town where they stopped along the way, Mother Jones was ready with a speech telling the public that she was on her way to let the President hear ‘the wail of the children’! The President refused to see her, but she got her publicity!  Child labor laws soon followed.

In January 1914, Mother Jones visited Ludlow, Colorado to show her support for the miners trying to organize against the Colorado Fuel and Iron Company, owned and controlled by John D. Rockefeller. She instilled hope in the strikers with her powerful speeches, even though she was over 80 years old. The mine owners had her arrested immediately and confined in a psychiatric ward at Mt. San Rafael Hospital (police said they were arresting her for her own protection).  On January 21, some of the miners' wives and children organized a parade to protest her arrest. Adjutant General Chase, commander of the Colorado Militia, was so furious he gave orders to "Ride down the women!" His mounted troops then attacked the women and children with their sabers drawn and injured many. Mother Jones was escorted to the state line and told never to return. Over 13,000 miners and their families were evicted from the shacks provided by the company, so they set up a tent colony on land loaned by those who supported the strikers' union.

The coal company was furious and began shooting into the tent colony, unsuccessfully trying to frighten the strikers back to work. As the violence grew, the Governor called in the Colorado National Guard who were easily bought by the coal company. When the Guard arrived they were not paid, so the Colorado Fuel and Iron Company paid them, stationed them in company buildings and supplied them with goods from company stores. The Guard became dependent on the company and set their goals on crushing the strikers. On April 20, 1914, the National Guard attacked the tent colony of 1300 striking coal miners and their families resulting in the violent deaths of 25 people including 2 women and 11 children. After the Ludlow Massacre, Mother Jones was invited to Standard Oil's headquarters at 26 Broadway to meet face-to-face with Rockefeller, a meeting that prompted him to visit the Colorado mines and introduce long-sought reforms. 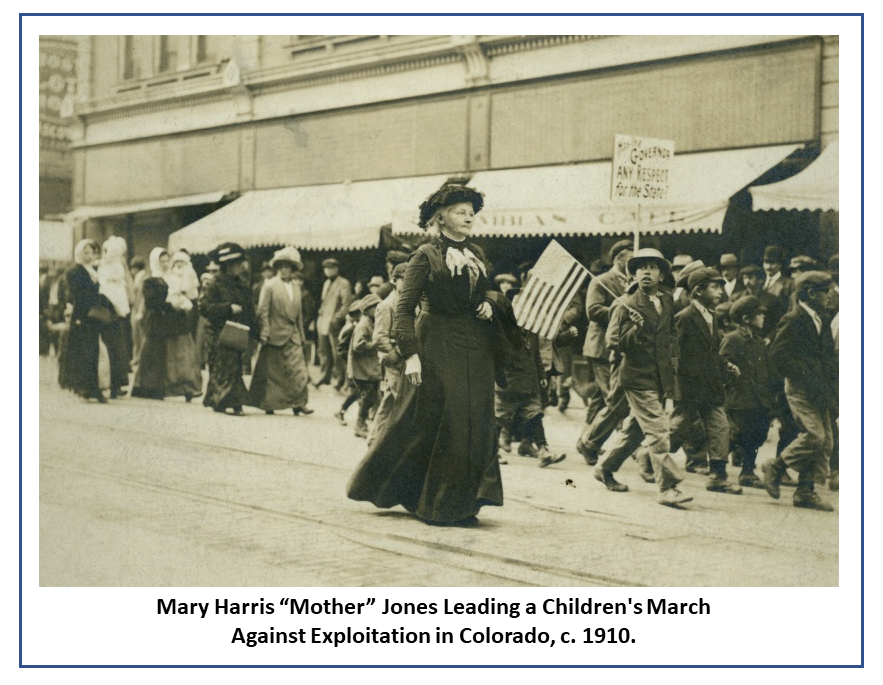