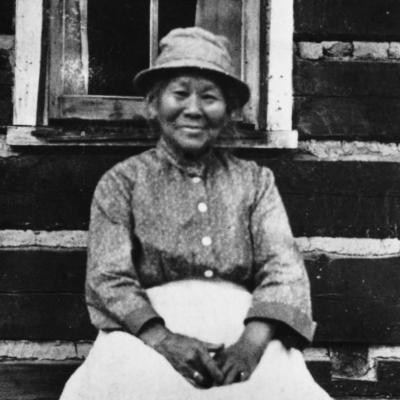 Polly Bemis became a legend after her death when her story became a biographical novel and was fictionalized in 1991, by Ruthanne Lum McCunn in the movie, Thousand Pieces of Gold. As such, some details of her story may be tied to folklore, but one thing is clear. As Idaho Governor Cecil Andrus said in 1987 when the Bemis cabin was dedicated, “The history of Polly Bemis is a great part of the legacy of central Idaho. She is the foremost pioneer on the rugged Salmon River.” It is now listed on the National Register of Historic Places.

Polly (frequently also referred to as Lalu Nathoy) was born in rural northern China, September 11, 1853, and later sold by her parents for two bags of seed to a group of bandits when the family fell on hard economic times because of the famine of 1871. [Although not much is known about conditions in this year, there was a well-documented, severe famine in North China, between 1876-79.] She was then resold into a form of sexual slavery (an unfortunate practice that happened during this period) and smuggled into the United States by an elderly female slave trader. She was purchased for $2500 in Portland by a Chinese pack train operator who had been hired by Polly's new owner to purchase a woman for him and bring her back to Warrens [now called Warren], (Video) in central Idaho, where she and other girls were sold at a public auction to become wives, concubines or prostitutes. Purchased by a man called Hong King, and, as the story goes, she became known as Polly when she was lifted her from her horse and presented to her new owner. She began working in King’s dance hall in the mining camp.

Despite the conditions, Polly learned to speak English and built her self-respect and dignity. She eventually won her freedom, but it is not clear whether she did so through her courage, sharp wit or the help of friends. Once she gained freedom from her Chinese owner, she ran a boarding house in Warrens, and during this time, met Charlie Bemis, who owned a saloon next door to the dance house. He offered her a home if she would keep house for him.

In 1894 she married Charlie, and they became part of the first group of the many to help settle the Idaho Territory, living along the Salmon River that was known locally as the 'River of No Return.' [There were lots of earlier pioneers, from the 1860s on, but very few lived along the Salmon River.] The Bemis’ did not have children, but Polly was well regarded for her garden, the strategies they used to visit neighbors on the river, and her love for, and care of, animals. Polly outlived her husband by 10 years and her last house is now a museum and is listed on the National Register of Historic Places.  Polly died on November 6, 1933, in Grangeville, Idaho, but she was later reburied next to her cabin once it was restored.

There is no definitive explanation for the title of the movie she was featured in, but it is true that Chinese fathers can use the term, “qiān jin” for their daughters. This particular spelling can mean “thousands of pounds of gold.”  We are not sure if Polly's father actually used this term.

The Polly Bemis House (below) is a fine example of the single-pen log construction on a stone foundation that is typical of construction methods used on the ranches and in the mining country of the central Idaho mountains. Located along the Salmon River, and accessible only by boat, the cabin measures about 15 by 20 ft. and has a floor plan of two rooms on the first story with a half-story sleeping loft, and a gable front with an overhanging roof. It the only inventoried example of this kind that is made of whipsaw (a saw that has handles on both ends) lumber. Polly and Charlie had lived together in another house that had burned—the building featured here replaced the earlier one, and it was here that Polly lived alone after Charlie died. Built for her by two neighboring prospectors turned ranchers, Charlie Shepp and Peter Klinkhammer, the house shows a number of finely crafted details, including a splined floor, and survives intact with most of its original materials.

To read another story about Polly Bemis created by Americans All, click here.

To read another story about Polly Bemis created by CINARC, click here.

This story was created from information provided by Priscilla Wegars, founder of the University of Idaho’s Asian American Comparative Collection (AACC) in Moscow, Idaho. She is also the volunteer curator of the Collection, which is a resource center of artifacts, images, and bibliographical materials that help a wide range of individuals better understand the history, culture, and archaeology of Asian Americans in the West. She has a Ph.D. in history from the University of Idaho and is an independent editor, historian, historical archaeologist, and artifact analyst. Priscilla is the author of Imprisoned in Paradise: Japanese Internee Road Workers at the World War II Kooskia Internment Camp (2010) and of As Rugged as the Terrain: CCC “Boys,” Federal Convicts, and World War II Alien Internees Wrestle with a Mountain Wilderness (2013; Co-Winner for Idaho Book of the Year). Her earlier research focused on Chinese immigrants in the West, and her book Polly Bemis: A Chinese American Pioneer (2003) received an Honorable Mention as the Idaho Book of the Year from the Idaho Library Association. She lives in Moscow, Idaho, and can be reached at pwegars@uidaho.edu.