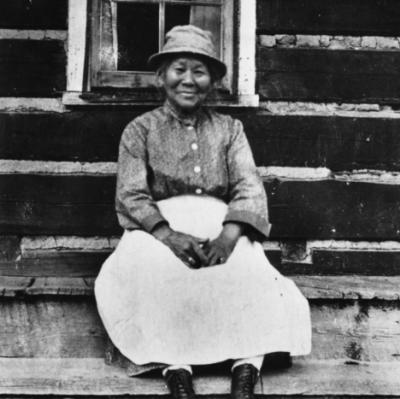 Polly Bemis (born Lalu Nathoy) was sold by her father for two bags of seed to a group of bandits in northern China when he fell on hard economic times because of the famine of 1871. She was then resold into a form of sexual slavery, smuggled into the United States by a slave trader heading for America. There, she and other girls were sold at a public auction to become wives or prostitutes. Her buyer, Hong King, named her Polly and took her to work in his saloon in a mining camp in Warrens, Idaho. (Video)

Despite the conditions, Polly learned to speak English and built her self-respect and dignity. She eventually won her freedom, but it is not clear whether she did so through her courage, sharp wit and the help of friends or because a neighbor who reportedly won her in a card game set her free.

Once she gained her freedom, she ran a boarding house in Warrens, and in 1894 she married Charlie Bemis. They became part of the first group of pioneers to help settle the Idaho Territory, living along the Salmon River that was known locally as the River of No Return. They did not have children, but she was well regarded for her nursing skills and love and care of animals.

Bemis became a legend after her death when her life was documented by Ruthanne Lum McCunn in a biographical novel, Thousand Pieces of Gold; her father used to call her his quianjin, his thousand pieces of gold. Her final cabin—she outlived her husband by 10 years—is now a museum and is listed on the National Register of Historic Places. When the cabin was dedicated in 1987, Idaho Governor Cecil Andrus said, “The history of Polly Bemis is a great part of the legacy of central Idaho. She is the foremost pioneer on the rugged Salmon River.” (The photograph was obtained from the Idaho State Historical Society, 71-185.29.)

To read another story about Polly Bemis created by Priscella Wegers, click here.

To read another story about Polly Bemis created by CINARC, click here.