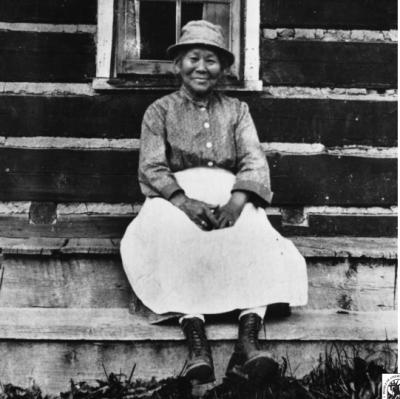 Because she has been the subject of many articles and several books, including the best-seller by Ruthanne Lum McCunn and a fine children's book by Priscilla Wegars, Polly is one of the best-known of all Chinese women in Northwestern history.  Exceptionally self-reliant and adaptable, she was also unusual in that she married a white man in a period when East-West marriages in that direction were very rare.  Due to the general scarcity of Chinese women in North America in those days, it was much more common for Chinese men to marry European women rather than the other way around.

Polly Bemis's Chinese name is often given as Lalu Nathoy. This seems to us impossible. Only a handful of Chinese surnames have two syllables, and neither Lalu nor Nathoy is one of them. Moreover, neither the hard nor soft "th" sound occurs in any Chinese dialect.  Besides, now we know her real Chinese name. It appears as her signature on a government registration document in Chinese Exclusion File #298172 at N.A.R.A./ Alaska-Pacific Region, Seattle. The two-character signature, as reproduced above, reads "Gong Heng," (恭亨) written inexpertly but legibly. The documents show she claimed to be 47 in 1906, which would mean she was born in 1859.

Although Gong and Heng both can be family names, Gong was probably hers. Like several other Chinese who lived for long periods in the frontier West, she seems not to have been in contact with her family. Perhaps she had simply lost contact, though that would have been unusual in those days for either a prostitute or a respectably married Chinese woman who traveled overseas. Or perhaps she had cut off contact. Not all daughters sold into prostitution by hard-up parents can have reacted with filial devotion, sending money home faithfully year after year. Some must have been bitterly resentful. Polly Bemis/Gong Heng could represent one such case.

Ruthanne Lum McCunn has just sent us a copy of the revised 2004 edition of her Thousand Pieces of Gold, with the gentle suggestion that we might want to look at the additional research on Polly's names included in that edition. She is right. We are embarrassed to have implied we were the discoverers of Polly's Chinese name, Gong Heng. We should have known. By 2004, several capable Chinese American scholars, including Marlon Hom and Judy Yung, had already seen Polly's registration certificate and read her Chinese name as "Gung Heung," and the revised edition of TPOG had already published that fact.

The revised edition also includes a theory suggested to Ms. McCunn by Huang Youfu (黃有福), now at Beijing's Minzu (Nationalities) University, that the name "Lalu Nathoy" could indicate that Polly was born as a member of the Manchu/Mongolian-speaking Daur minority of far northeastern China.

While Professor Huang's suggestion may make linguistic sense, it does entail some practical difficulties. Although a few Chinese women did reach North America from  Beijing and Shanghai in the 19th century (several appear in the Canadian Head Tax records), it would not have been cheap or easy to bring a "slave girl" from the distant Mongolian-Manchurian steppes more than fifteen hundred kilometers to Hong Kong, in 1870 the departure point for almost all servant girls/ prostitutes sent to North America. Why would the buyer of an ordinary untrained tribal girl have gone to such expense?  How could she have had bound feet, when that practice was strictly forbidden by the Imperial government for all Manchu-connected females?  How could she have communicated, even if she spoke some Mandarin along with her tribal language, in a Northwest American Chinese world where almost no one spoke anything except pidgin English, dialects of Cantonese, and the Chinook Jargon?

So we think that the northern tribal hypothesis, while interesting, should be received with caution. We find it easier to believe that Polly's birthplace, described by her biographers as being "near one of the upper rivers of China," was on the hilly northern border of Guangdong or Guangxi province, that when young she spoke a form of Cantonese, perhaps together with a tribal language, and that her girlhood home was at most only a few hundred kilometers from Hong Kong, whence she was sent to America. As for the Lalu Nathoy name, "Lalu" could be an invention by a local white acquaintance—it is not attested by any source until after Polly's death (by Sister Alfreda Elsensohn, Idaho Chinese Lore, 1979: p 80-1). "Nathoy" appears on her marriage certificate where the first letter is either an N or an H. In either case, it could be a corruption of "Ah Toy," a common Cantonese/Taishanese woman's name.

Polly Bemis seems to have been an extraordinary individual, and one whose life has been described by an exceptional group of writer-historians.  Her fame has caused most public and private records to be thoroughly searched. However, one remains hopeful. New documents may yet appear that will solve the Polly problem once and for all.

To read another story about Polly Bemis created by Priscella Wegars, click here.

CINARC (the Chinese in Northwest America Research Committee) is quite new, having been established in July 2008. We are Pacific-Northwest-based researchers who approach the subject from the viewpoints of history,  anthropology, and economics. Our purpose is to encourage collaboration in exploring the history of Chinese in the Pacific Northwest—in Washington, Oregon, Idaho, British Columbia, Alaska, etc--between the first known arrival of Chinese in 1788 and the great changes in the regional Chinese population that followed the liberalizing of U.S. immigration laws in 1965. 美洲西北角 华裔早期历史.

Nonprofit users are free to use text and original or out-of-copyright images from CINARC's website as long as they credit CINARC and ask subsequent users to do the same. Images that are credited to other individuals or institutions, however, should not be reproduced without first consulting the owners. For-profit users should get the permission of CINARC's editors before publication, in print or electronic form. 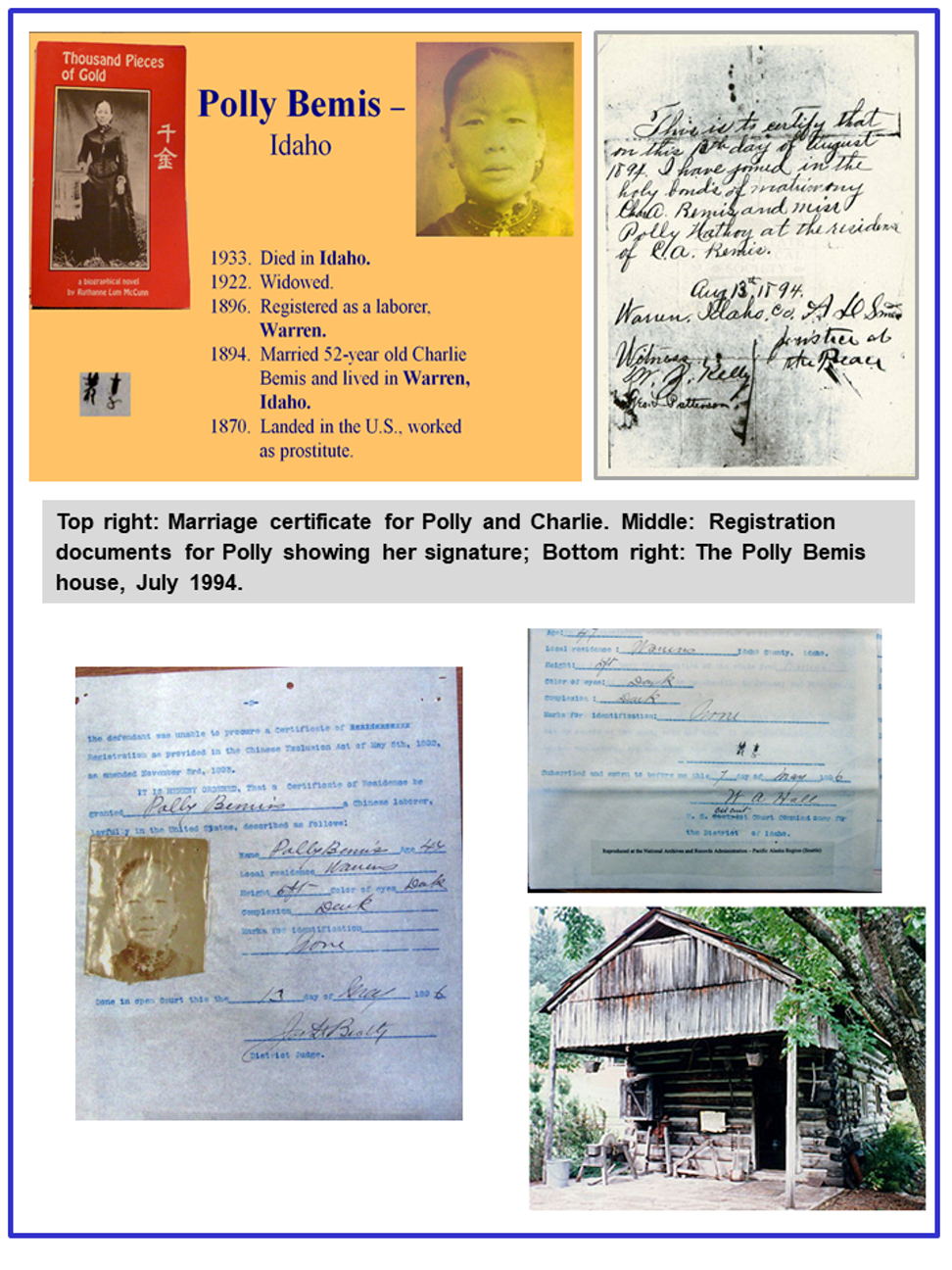