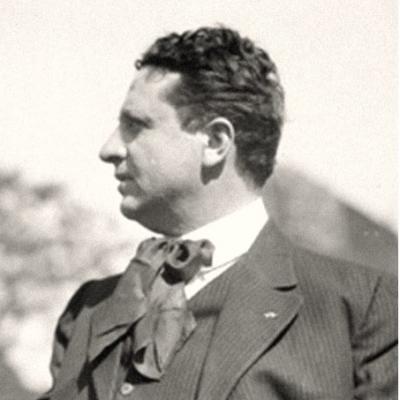 Sculptor Pompeo Coppini was born in Moglia, Mantua, Italy, the son of Giovanni and Leandra (Raffa) Coppini. He grew up in Florence, where he was a student at the Accademia di Belle Arte and there studied under Augusto Rivalta. He graduated with highest honors in 1889. On March 5, 1896, Coppini immigrated to the United States with very little money and no knowledge of English. On February 27, 1898, he married Elizabeth di Barbieri of New Haven, Connecticut; he became an American citizen in 1902.

Coppini, hearing of Frank Teich's search for a sculptor, moved to Texas in November 1901. He was commissioned to model the statue of Jefferson Davis and other figures for the Confederate monument (1901–03) subsequently erected on the Capitol grounds in Austin. Other Texas commissions followed one of the best known being the Littlefield Fountain Memorial (1920–28) at the University of Texas at Austin. He also did the seven bronze statues along the south mall of the university grounds, all of which were associated with the Littlefield commission except the sculpture of George Washington (completed 1955). Coppini's Texas works include a statue of Rufus C. Burleson at Baylor University in Waco (1903), the monument to Sam Houston at Huntsville (1910), a monument at Gonzales in commemoration of the first shot fired for Texas independence (1910), a statue of a Confederate soldier at Victoria (1911), busts of Albert Sydney Johnston, Robert E. Lee, Jefferson Davis, and Stonewall Jackson for the Confederate monument at Paris, Texas (1903), and a group statue called The Victims of the Galveston Flood (1903–04), which was given to the University of Texas, Austin.

Coppini also modeled the equestrian monument to Terry's Texas Rangers (Eighth Texas Cavalry) on the Capitol grounds (1905–07), the Charles H. Noyes Memorial in Ballinger (1918–19), the John H. Reagan Memorial in Palestine, with its personification of the "Lost Cause" (1911), and the bronze doors of the Scottish Rite Cathedral in San Antonio (dedicated 1926). One of his best-known works is a statue of George Washington in Mexico City (1911).

Coppini lived and worked in San Antonio until 1916 when he moved to Chicago for financial reasons. Three years later he moved to New York City to facilitate the production of the Littlefield Fountain Memorial. He was assisted on this and other major projects by sculptor Waldine Tauch, who began studying with Coppini in 1910 and continued to work with him as his colleague and foster daughter until his death. She designed and sculpted a $10,000 monument to commemorate the first shot of the Texas Revolution, which was unveiled on March 14, 1937, in a ceremony presided by Governor James V. Allred and attended by state legislators and over two thousand citizens. Tauch crafted other monuments in Brownwood, Waco, Canton, and San Antonio.

In 1937 Coppini established a studio at 115 Melrose Place in San Antonio in order to work on a major commission for the Texas Centennial, the cenotaph to the heroes of the Alamo (1937–39) on Alamo Plaza in San Antonio. Other Centennial commissions awarded to Coppini were the commemorative half-dollar (1934) and the Hall of State bronze statues of Stephen F. Austin, Thomas J. Rusk, William B. Travis, James W. Fannin, Mirabeau B. Lamar, and Sam Houston (1935–36). Coppini's contributions to the state were recognized in 1941 when he was awarded an honorary Doctor of Fine Arts degree from Baylor University. Recognition and appreciation of his work extended to Italy, for in 1931 he was decorated "Commendatore" of the Crown of Italy for his contribution to art in America.

Coppini is represented in the United States by thirty-six public monuments, sixteen portrait statues, and about seventy-five portrait busts. When expressing his own attitudes toward art and sculpture, he often criticized modernism, which he attributed to a general lack of screening of pupils in art schools. He thought that art training should be a regular branch of learning in a university, with strict standards that would assure adherence to classic and academic artistic traditions. He emphasized the importance of individual instruction from experienced artists.

From 1943 to 1945 he was head of the art department of Trinity University in San Antonio. In 1945 he and Tauch cofounded the Classic Arts Fraternity in San Antonio (renamed Coppini Academy of Fine Arts in 1950). Coppini died in San Antonio on September 26, 1957, and was buried in Sunset Memorial Park in a crypt of his own design. He was survived by his wife and his foster daughter. The San Antonio studio now serves as a museum of Coppini and Tauch's work.