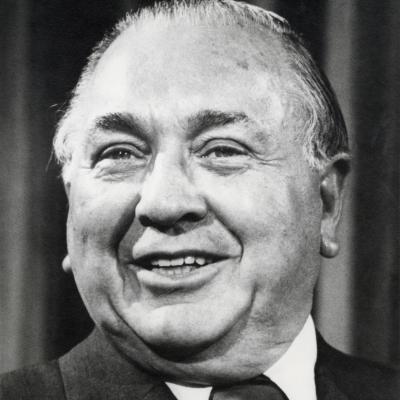 Richard J. Daley was the third Chicago mayor to be born in the working-class Irish neighborhood of Bridgeport on the city’s Near South Side. The only child of Irish Catholic sheet-metal worker and labor unionist Michael Daley and his wife, Lillian (Dunne) Daley, Richard attended Nativity of Our Lord parochial elementary school and graduated in 1919 from De La Salle Institute, a Catholic High School that taught business and clerical skills. He worked briefly in the stockyards and attended college and later night school law classes at DePaul University. He received his law degree in 1933 and in 1936 partnered with Bridgeport lawyer William J. Lynch.

Daley entered politics through the Hamburg Athletic Club, a Bridgeport club active in Chicago election politics. He was a member and in 1924, elected its president. Club sponsor, Alderman and Ward Committeeman Joseph McDonough chose Daley to be his personal ward secretary and a precinct captain in the politically active 11th Ward, where his home and the Club were located. After the 1923 election of Mayor William Dever, Daley began work as a clerk in the City Council. In 1930, McDonough became County Treasurer and Daley became his deputy. After McDonough’s death, Daley continued to work under County Treasurers Thomas D. Nash, Robert M. Sweitzer, and Joseph L. Gill. Following the death of 20-year veteran Michael J. O’Connor in 1936, Daley was appointed Chief Deputy County Comptroller.

In that same year, with the backing of McDonough, Daley was elected to his first political office as a write-in Republican Party candidate to replace the recently deceased state representative, David Shanahan, in the Illinois General Assembly. Immediately after the election, however, Daley returned to the Democratic Party, and remained a lifelong Democrat. In the legislature, Daley supported progressive legislation such as the school lunch program and a fairer state sales tax. In 1938, he was elected state senator, and served as senate minority leader from 1941 to 1946. In 1946, he lost to Republican candidate Elmer Walsh in an election for Cook County Sheriff. This was his only electoral defeat. In 1948, he was appointed Governor Adlai Stevenson’s State Director of Revenue and advocated for fiscal and tax reform. In 1950, after the death of the current Clerk, Daley was appointed to fill out the term as Clerk of Cook County and was elected to a full term in 1950 and re-elected in 1954. As Clerk, his office was responsible for vital records, and instituted several innovations such as the first county court calendar of law, and he streamlined marriage license procedures. An active participant in Democratic politics, he become Democratic Ward Committeeman of the 11th Ward in the late 1940s. In 1953, he became Chair of the Democratic Central Committee, a powerful position which oversaw slate making for every county elected position. In 1955, he defeated incumbent Mayor Martin Kennelly and former State Representative Benjamin Adamowski in a bitterly contested primary election and then defeated Republican alderman Robert Merriam in the general election, becoming the 39th Mayor of Chicago. In a new tradition, he was sworn in by childhood friend, Judge Abraham Lincoln Marovitz, instead of the outgoing mayor. The voters of Chicago re-elected Daley in 1959, 1963, 1967, 1971, and 1975. He served five full terms and one partial term in office – the longest serving mayor until that time. As simultaneous head of the city government and the local Democratic Party, he wielded great local, state, and eventually national political influence.

Shortly after his first election, Daley recruited new policy professionals to his administration and consolidated his power over the City Council. He transferred city budget initiation from the Council to his comptroller’s and budget director’s offices, shifted the issuance of city contracts to the city’s purchasing agent, won new sales and utility taxing powers, centralized many ward services and limited the ability of council members to grant such potentially lucrative favors as issuing driveway permits. Except for a small number of Independents and northwest side Republicans, he faced limited opposition from the aldermen, never losing a vote in the City Council. In 1970, he reduced state power in Chicago by gaining “home rule” status, which allowed the city to impose all but income taxes without state legislative approval.

As mayor, Daley focused on municipal services and the development of the city center, contributing to the oft-cited image of Chicago as “the city that works.” During his first term, the city added new garbage trucks, sewers, street and alley lighting, downtown parking facilities and more police and fire personnel. Under his watch, the Central District Filtration Plant (1968), the largest in the world, provided fluoridated water to the central and north sides and the South Water Filtration Plant was expanded. In 1975, the Deep Tunnel project (Tunnel and Reservoir Plan) was begun to relieve flooding in the metropolitan area. The city’s first bicycle paths and first city-sponsored neighborhood health clinics were initiated, and neighborhood cleanup campaigns were begun.

Soon after his first election, the annual Southtown Parade in honor of St. Patrick’s Day was moved downtown and the Chicago Journeymen Plumbers Union began a tradition of dyeing the Chicago River green in celebration. Venetian Nights also attracted crowds to the riverfront. In 1959, an International Trade Fair celebrating the opening of the St. Lawrence Seaway was attended by Queen Elizabeth and Prince Phillip. The city sponsored downtown parades for the crews of Apollo 10, 11, and 13 and hosted visits by Sean F. Lemass, the first Prime Minister of Ireland, Eleanor Roosevelt, Levi Eshkol, Premier of Israel, King Frederik IX and Queen Ingrid of Denmark, numerous politicians, and celebrities such as Frank Sinatra, Danny Thomas, and Jack Benny. Under Daley, new building projects dramatically changed the physical character of the city. Daley’s administration presided over the construction of the Northwest (1960), Dan Ryan (1962), Congress (1964), and Southwest (1964) expressways, the extension of Wacker Drive, and the expansion of the North and South Outer Drives. In 1966 a new Civic Center was dedicated in downtown Chicago and in 1967 it was graced by the gift of an outdoor sculpture by artist Pablo Picasso.

Other notable outdoor artwork followed, including Chagall’s Four Seasons (1974) and Calder’s Flamingo (1974). The construction of the massive McCormick Place Convention Center (1960) on the lakefront and the enlargement of O’Hare International Airport brought travelers and business to the city. The O’Hare dedication (1963) was attended by President John F. Kennedy. The Sears Tower (1973), IBM Plaza, Marina City, Lake Point Towers, John Hancock Building (1970), and the Water Tower Place (1975) all contributed to the revitalization of the downtown. Although the city lost several historic buildings to the trend towards new construction (including the Garrick Theatre and the Stock Exchange Building), the old public library was saved by a Daley-appointed committee and later became the Chicago Cultural Center. In 1968, the city established a Commission on Chicago Landmarks (CCL) which researches and recommends historic landmark status to the City Council. 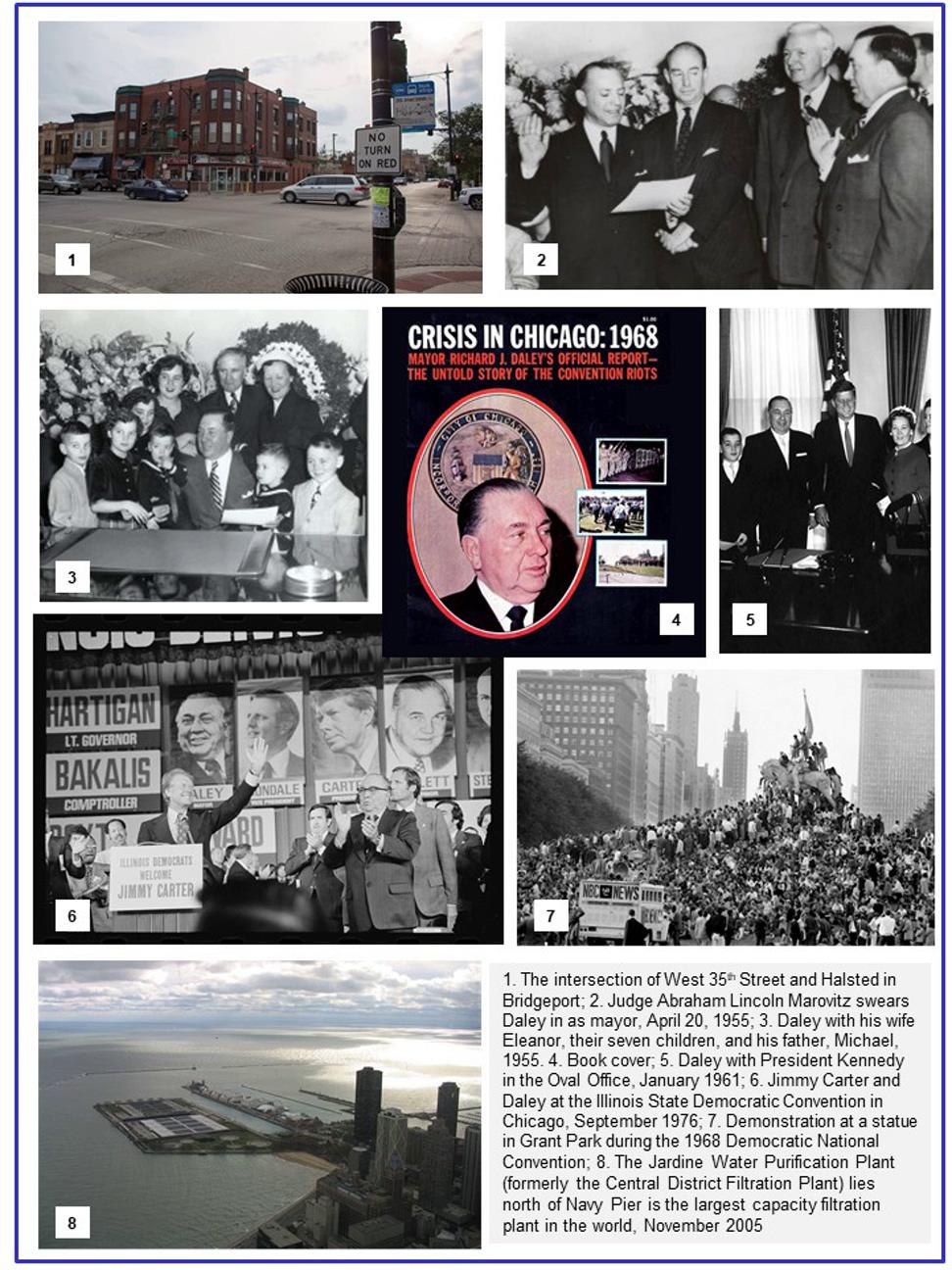