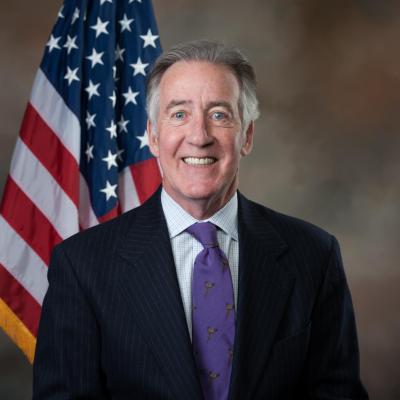 On November 7, 1960, Mary Garvey Neal, who had roots in Ventry, County Kerry [Ireland], took her son to the Springfield, Massachusetts, town hall. It was very late and Richie Neal, then 10 years old, would never forget that evening.

He was there to witness one of the last campaign stops of Senator Jack Kennedy during the final frenetic days of the race against Richard Nixon for the presidency. He vividly remembers seeing him that day on the steps of Springfield City Hall, and it left him with a sense of inspiration and aspiration. Moved by the passion and fire he witnessed, he decided then and there he wanted to be a politician. And it was a great time of ascendancy in politics. In his area, there was a succession of mayors, six or seven in a row, whose parents or grandparents were Irish born. He also learned that the Democratic Party was the beneficiary of the Irish; they brought the right infusion of energy. And there was a great alliance between unions and the Democratic party.

Richard Edmund Neal was born February 14, 1949, in Worcester, Massachusetts, the oldest of three children of Mary H. (Garvey) and Edmund John Neal. Richard’s maternal grandparents were from Northern Ireland and his paternal grandparents were from Ireland and Cornwall. He and his two younger sisters were raised in Springfield by their mother, a housewife, and their father, a custodian at MassMutual. Neal's mother died of a heart attack when he was 13, and he was attending Springfield Technical High School when his father died not long after. Neal and his two younger sisters were fortunate to be able to move in with their grandmother and later their aunt.

He felt very lucky to have them in his life—and it kept them from being adopted. Both women were very Catholic (as was his mother), and his aunt was devout. They got by as a family on a modest income. His father had left a small insurance policy and they lived on his aunt’s pension from Mass Mutual and a social security survivor’s benefit of about $119 a month for each child. Although he acknowledges that there is much controversy regarding what is happening in the Church today, when his family was growing up, the Church was an anchor in their lives.

After graduating from high school, Neal attended Holyoke Community College in Holyoke, Massachusetts, and then American International College in Springfield, with the assistance of survivor's benefits. He graduated in 1972 with a Bachelor of Arts in political science. He then attended the University of Hartford's Barney School of Business and Public Administration, graduating in 1976 with a Master of Arts in public administration. Early in his career, Neal taught history at Cathedral High School.

Local Government History: Neal began his political career as co-chairman of Democratic presidential candidate George McGovern's 1972 election campaign in Western Massachusetts. He was elected to the Springfield City Council in 1978 and was named President of the City Council in 1979. While a city councilor, Neal taught history at Cathedral High School and was an accomplished lecturer. In 1983, he was elected to his first of three terms as Mayor of Springfield.

U.S. House of Representatives: In 1988, Neal ran for the United States House of Representatives in Massachusetts's 2nd congressional district, taking the House seat of his political mentor, Ed Boland, when he retired. He ran unopposed in the Democratic primary and his only general election opponent was Communist Party candidate Louis R. Godena, whom he defeated with over 80 percent of the vote. He has won reelection every two years since. In fact, since 1994, he has had little electoral opposition.

For his first 12 terms in Congress, he represented a district centered on Springfield and stretching as far east as the southern and western suburbs of Worcester. When Massachusetts lost a congressional district after the 2010 census, the bulk of Neal's territory, including his home in Springfield, was merged with the 1st District, held by fellow Democrat John Olver. Fortunately, the prospect of an incumbent vs. incumbent contest was averted when Olver retired. The new 1st was no less Democratic than the old 2nd, and Neal was re-elected without much difficulty in 2012, 2014 and 2016.

Neal’s political record has been generally liberal and he has constantly voted with the Democratic party leadership. Domestically, he has made economic policy, especially simplifying the tax code, the focus of his career. He is also a strong supporter of the Social Security program and an advocate of health care reform.

His path to the leadership of Ways and Means was elongated, but thanks to a combination of retirement and defeat of those ahead of him, he arrived in January 2019 at the head of the most important committee in Congress. Three future presidents—James Polk, Millard Fillmore, and William McKinley—served as Ways and Means chairmen, while the very first occupant was Thomas Fitzsimons, a native of Ireland who also represented Pennsylvania at the Constitutional Convention in 1787.

An advocate for Irish Concerns: Descended from Irish grandparents on both sides, Neal has been an advocate for Irish concerns throughout his Congressional career, pushing to keep the United States involved in the Northern Ireland peace process. The following text has been excerpted from his conversation with Niall O’Dowd in May/June 2019, published in the Irish America magazine.

O’Dowd. You first got involved in the North when you were a councilman. The first time I got involved was in 1981 when Bobby Sands died [on hunger strike]. That’s when I took up a position because people in my community were outraged. You know, those guys were dying on hunger strike, and Margaret Thatcher’s response was that they were criminals. My first or second speech on the House floor after I got elected was on the use of rubber bullets [in Northern Ireland].

The first time I went to Ireland was around 1983; I went to visit relatives in County Down. In those days it was a militarized state. There were 30,000 British soldiers in an area the size of the state of Connecticut. You couldn’t go from street to street without being monitored. Helicopters circled no matter where you went. I was on a bus with Speaker of the House Tom Foley, and they boarded the bus. They had the big armaments and they had night vision—it was dark when we got on the bus—and they searched it.

When you look back at how the North and the Republic were colonized, and you look at the history, [you’ll see] that until the Rising, it was truly an argument about subjugation.

O’Dowd. You’ve been very involved in the Friends of Ireland Committee over the years. Yes. I’m proud of the American role in the Good Friday Agreement. This is our agreement, too. We’re the backstop. The British Embassy used to come up to the hill to meet with those of us in the [Congressional] Friends of Ireland. These were not pleasant meetings. But when the Good Friday Agreement came about, Tony Blair applauded us right here at the British Embassy. I remembered his quote all these years later. He said, “We’ve been great friends, America and the United Kingdom. We generally agreed on just about everything, but there was one issue we disagreed on: Ireland.” He said, “There was a time when I thought that the Friends of Ireland were a hindrance, but you helped us get through this.”

People forget that the Friends of Ireland was born of the purpose to try to compete with the money that was being used for gun-running. 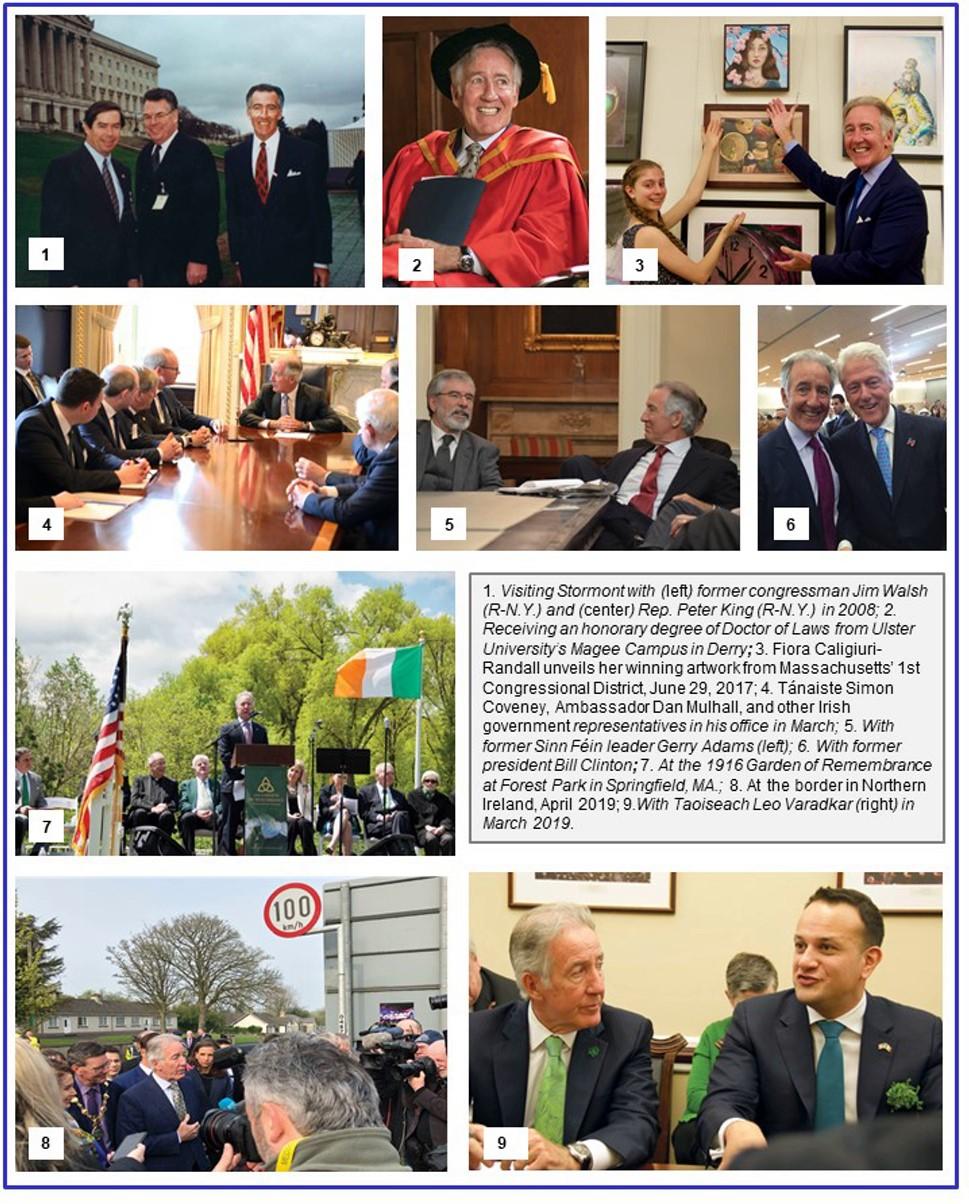