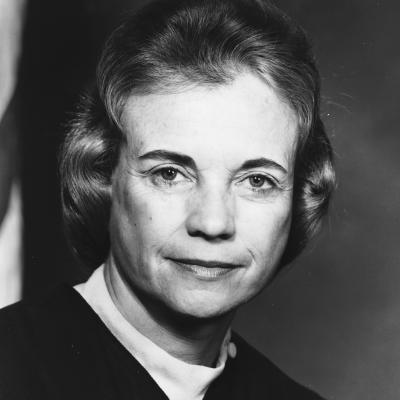 Late last year, retired Supreme Court Justice Sandra Day O'Connor issued a statement announcing that she had been diagnosed with Alzheimer's disease. It was a poignant moment, a reminder that for decades O'Connor was seen as the most powerful woman in America.

Now comes an important book about her — First, Sandra Day O'Connor: An Intimate Portrait of the First Woman Supreme Court Justice. It is unlike every other volume written about O'Connor — even the books the justice wrote about herself.

For those too young to remember, O'Connor was so admired on the public stage that there were even suggestions she run for president. She had no interest in that, but her vote and her approach to judging dominated the U.S Supreme Court for a quarter of a century, until her retirement in 2006.

Whether the subject was affirmative action, states' rights, national security or abortion, hers was often the voice that spoke for the court.

Author Evan Thomas breaks new ground with First. With extraordinary access to the justice, her papers, her personal journals — and even 20 years of her husband's diary — the book is, in a sense, an authorized biography. But it is considerably more.

It is an unvarnished and psychologically intuitive look at the nation's first female Supreme Court justice, and some of her contradictory characteristics. She was tough, bossy, relentless and, beneath that, she could be emotional. In private, she was not afraid to cry — and she had a soft spot for others when they needed it.

O'Connor learned to be independent and to "suck it up" early in life. Home was her parents' cattle ranch, the second largest in Arizona, 160,000 acres, one-fifth the size of Rhode Island.

It was "like our own country," she would say. But it was an unforgiving country with no heat and no running water.

She was just 6 years old when her parents sent her four hours away by train to live with her less-than-warm-and-fuzzy grandmother in El Paso, Texas, so she could go to a good private school.

She adored her father, and he gruffly loved her too. But author Thomas says it was by watching her mother that she learned an important lesson — one that would guide her through life as she dealt with men and the world they dominated: Don't take the bait.

As author Thomas put it in an interview with NPR, O'Connor's father, known as DA, "could be harsh to his own wife," especially after a few drinks in the evening, "and what Sandra observed that was so valuable to her was that her mom did not take the bait. She learned how to roll with it."

It was a lesson that served O'Connor well when she was elected to the Arizona state senate, a place that author Thomas describes as "a very male and very rough place for a woman in 1970."

Not only did the men drink a lot, "sexual harassment was the order of the day." Usually O'Connor dealt with all that by just walking away. "She was not an arch-feminist," Thomas says. And, in relatively short order, O'Connor was elected majority leader.

One of those times involved Tom Goodwin, the chairman of the Arizona House Appropriations Committee. Thomas describes him as "a drunk-by-10:00 A.M. drunk." And when O'Connor finally confronted Goodwin about it, he snarled at her, "If you were a man, I'd punch you in the nose," to which she replied, "If you were a man you could."

She was "smarter than the men," and more organized, Thomas says. But after five years, she walked away from the legislature to become a state trial court judge.

Lucky Timing — And A Small Field Of Contenders

O'Connor served four years on the trial court, then two on an intermediate-level appeals court.

Not exactly a springboard to the Supreme Court.

But when Ronald Reagan, carrying out his campaign promise, wanted to name a woman to the high court for the first time, there weren't many conservative female judges to pick from. And O'Connor had friends in high places, among them Justice William Rehnquist, who had gone to Stanford Law School with her, courted her, and proposed to her — a fact not known even to the O'Connor and Rehnquist children until author Thomas unearthed their early correspondence.

On July 7, 1981, President Reagan, after meeting privately with O'Connor, announced her nomination.

Prepping for her confirmation hearing was daunting. She had no experience with constitutional law, or federal court practice. And she was cramming like mad.

"She had an amazing ability to absorb information quickly and retain it and go for what mattered," observes Thomas. "She could go through thousands of pages of dense, turgid legal stuff" and get to the point "in a hurry."

The young Justice Department staffer assigned to help O'Connor was one John G. Roberts Jr., who would decades later become chief justice of the United States. But back then, he simply couldn't keep up with O'Connor; he was not able to get her the information she wanted fast enough.

So she formed her own team in Arizona to supplement what she was receiving in Washington. She was, as author Thomas puts it, "a relentless grind." But at the confirmation hearings, the first ever to be broadcast, she was a sensation, answering questions deftly, knowledgeably and skillfully avoiding political potholes and trip wires on abortion and other controversial subjects.

The public loved her, and she was confirmed 99 to 0.

'The Glue' Of The Court

Much has been written about how terrified O'Connor was when she joined the Supreme Court. As she put it in an NPR interview, "Everyone said, 'Oh, we're so glad you're here now, just let me know if I can help.' I didn't even know the questions to ask to get the help I needed. ... We had more mail than we could even open." She knew that any misstep could be fatal for women's prospects all over the country. As she often put it, "It's good to be first, but you don't want to be last."

Less well known is how exhilarated she was to be playing in the biggest and most exclusive legal league in the country, a place where she could make a difference.

Also less known is the role she played in getting the court together. When she arrived, only four of the nine justices would show up for the justices' weekly lunches. And O'Connor set about to change that.

"She knew from her own experience that breaking bread together really is a way to get people to know each other, and she made it her business to make sure that the justices showed up for lunch," says author Thomas. "She would appear in their chambers and just sit there until they came with her."

Perhaps her most difficult luncheon recruit was Clarence Thomas, who arrived in the fall of 1991 after a bruising confirmation hearing involving charges of sexual harassment.

"On his very first day, Thomas, feeling glum and alone, is walking down the hall when O'Connor comes up to him and tells him, 'those hearings were very harmful.' The next day she shows up again, and she says, 'You've got to come to lunch.' But he doesn't want to. He wants to be alone. The next day, she's back," reports author Thomas, and she says, " 'Clarence, you've got to come to lunch.' And finally he does. And he said, 'You know it made all the difference for me. I went from being lonely and alone to coming to lunch.' A little simple thing, but he joined the group because he realized that life has got to go on, this group has got to get along. She made him realize that."

Indeed, the author quotes Thomas as telling him that O'Connor "was the glue ... that made this place civil."

She stayed committed to this role throughout her entire career as an associate justice. She held her head high and would not let slights get to her. When Justice Antonin Scalia would write a dissenting opinion belittling her work, she refused to reply in kind, deleting the zingers that her clerks added to draft opinions in reply. 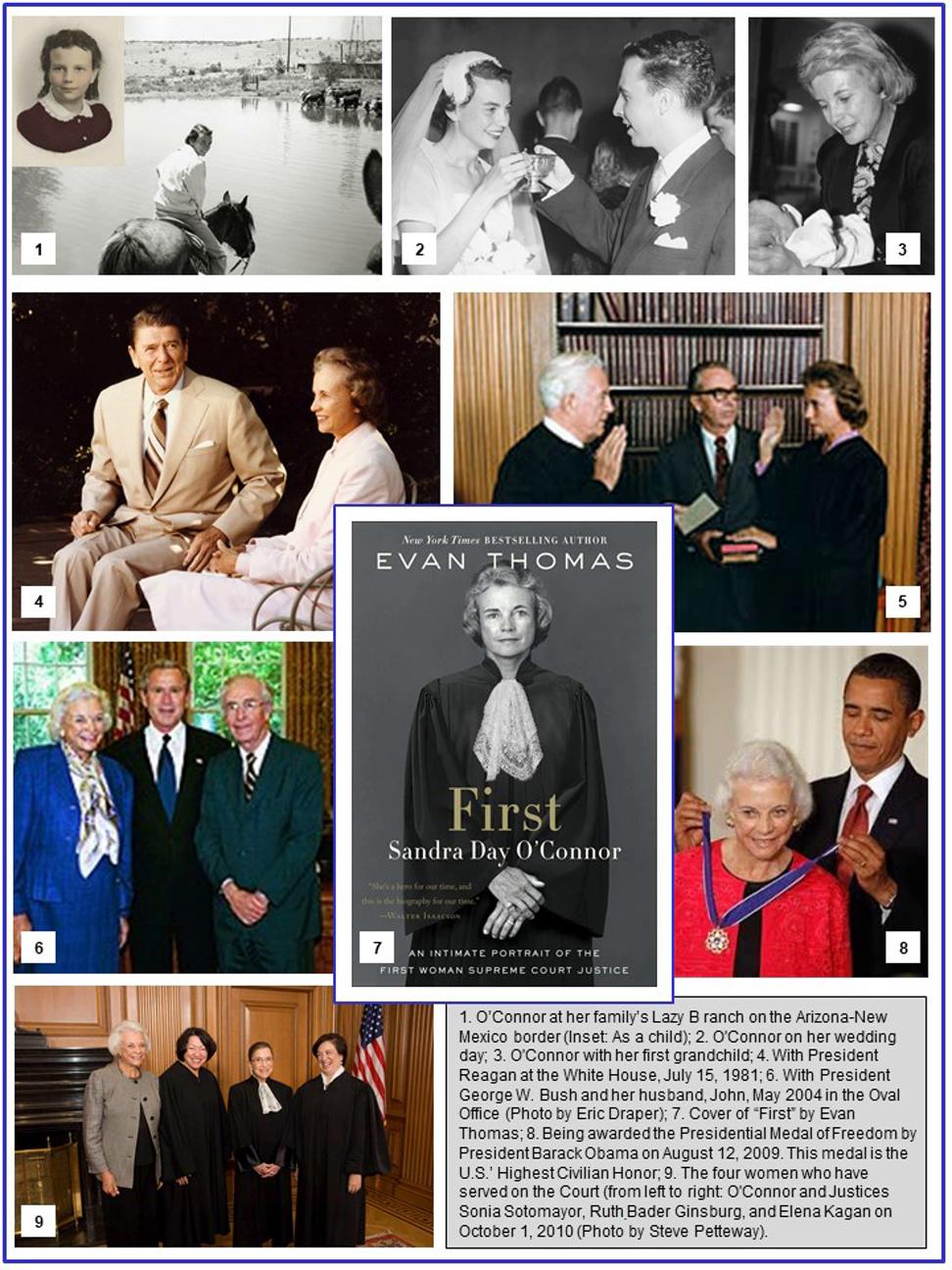