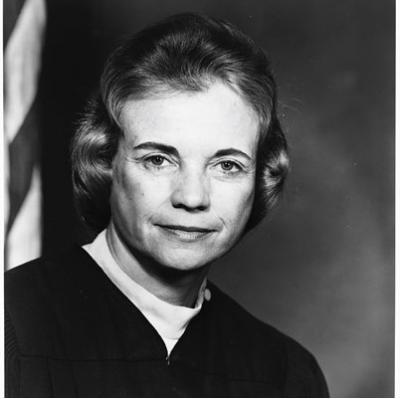 At a party at her Arizona home in 1981, a middle-aged Sandra Day O’Connor, ever the consummate hostess, served enchiladas poolside with good cheer. But when she greeted a friend of her son who was soon to begin a clerkship for Supreme Court Justice William Rehnquist, her mood shifted. As Evan Thomas describes the scene in “First,” his illuminating and eminently readable biography of the Supreme Court’s first female justice, O’Connor “conveyed an almost palpable sense of longing” for past opportunities denied her because of gender. With her appointment to the court weeks away, she launched into a stream-of-consciousness monologue about her envy decades earlier when Rehnquist, her Stanford Law School classmate (and former beau), had started his clerkship at the court, a steppingstone at that time reserved almost exclusively for men.

Intelligent, ambitious women of O’Connor’s vintage were thwarted at every turn. A Stanford Law Review editor in the top 10 percent of her class, she couldn’t even get an interview with the big firms that recruited on campus in the 1950s. When she wangled a meeting in the Los Angeles offices of Gibson, Dunn & Crutcher, Thomas writes, a partner told her “our clients won’t stand for” being represented by a woman and suggested a secretarial job instead.

By the time of the poolside chat, O’Connor had racked up an impressive series of achievements against the odds. She’d been the majority leader of the Republican-controlled Arizona state Senate and a state judge at the trial appellate level. But the doors slammed shut earlier in her career were not easily forgotten.

Sexism stings. And it stung just as harshly for a Phoenix country club Republican like O’Connor as it did for a liberal Brooklynite like Ruth Bader Ginsburg.

Only a few weeks after that pool party, President Ronald Reagan made good on a campaign promise to appoint a woman to the Supreme Court. O’Connor got the call and breezed through her confirmation with a 99-to-0 vote.

That O’Connor found herself the highest-ranking woman ever in American government was no accident. Thomas vividly sketches the attributes she used to clear the high barriers to female ascendancy: a knack for brushing past insults, relentlessness belied by a pretty smile, an almost superhuman level of energy and, not least, a heroically supportive husband. John O’Connor was a successful lawyer in his own right but willing to take a back seat if it meant helping his wife achieve her lofty goals.

This list of assets will sound familiar to Ginsburg aficionados. (Though unlike the kitchen-averse RBG, SDO could whip up a tasty salmon mousse when the need arose.)

While Ginsburg in her pre-justice days distinguished herself by fighting to secure gender equality under the Constitution, O’Connor was no flaming feminist. If she had been, the Reaganites surely would have looked elsewhere. As a politician anxious to distance herself from women’s libbers, she addressed a Rotary Club with the evocative line: “I come to you with my bra and my wedding ring on.” In the state Senate, O’Connor played a key role in striking down hundreds of Arizona laws discriminating against women, but she didn’t put her political weight behind passage of the Equal Rights Amendment. After the Supreme Court’s 1973 Roe v. Wade opinion, she voted against a resolution calling for an antiabortion constitutional amendment but supported key measures restricting women’s access to abortions.

It was the same style of compromise — some might say fence-straddling — that O’Connor would employ as a Supreme Court justice. Some legal scholars have criticized her for seeking to decide cases on narrow grounds, leaving larger constitutional issues unresolved. In Thomas’s more generous interpretation, O’Connor’s judicial “minimalism” flowed naturally from a realpolitik she’d honed as, well, a real politician.

In Wygant v. Jackson Board of Education (1986), four justices wanted to throw out a Mississippi plan to lay off white teachers with seniority before their less-experienced black counterparts, and four favored preserving the plan, designed to redress the city’s clear history of racial discrimination. O’Connor, finding herself in the middle and undecided, initially proposed sending the case back to the lower court to be reargued. Eventually she joined most of Justice Lewis Powell’s majority opinion striking down the layoff plan, but in her concurrence she left the door open to constitutionally permissible affirmative action.

O’Connor went on to write key majority opinions on affirmative action herself. Adarand Constructors, Inc. v. Pena (1995) ruled that affirmative action plans must be subjected to the most stringent level of judicial scrutiny, though O’Connor made clear that not all affirmative action is untenable. Later in Grutter v. Bollinger (2003), she wrote for the majority to uphold an affirmative action plan at the University of Michigan Law School. Thomas emphasizes the court’s role in helping the American people, who “are divided and feeling their way,” through tough issues. “The Court is an essential part of a long process of melding attitudes and mores with the law of the land.”

O’Connor was temperate on abortion rights cases, too, resisting numerous attempts by her conservative colleagues to strike down Roe but not issuing the ringing endorsement of reproductive freedom that liberals might have favored. Her split-the-difference standard: States can regulate reproductive rights so long as their rules don’t place an “undue burden” on a woman seeking an abortion. In Planned Parenthood of Southeastern Pennsylvania v. Casey (1992), which she co-authored with Justices David Souter and Anthony Kennedy, O’Connor’s “undue burden” standard became the law of the land.

Interspersed with the legal analysis in “First” is lighter fare: camaraderie and sniping among the justices, even a scene where two clerks come to fisticuffs in a Supreme Court fountain — over an abortion rights case.

Some anecdotes are so juicy I found myself checking the footnotes to see where Thomas got them. Yes, as in most Supreme Court literature, there’s plenty from the clerks. But some of his best material comes from interviews with former and sitting justices. And he makes strong use of the notes scrawled by justices in conference or in the margins of draft opinions. (“Very tent[ative]!!!” an apparently irritated Justice Harry Blackmun wrote by O’Connor’s name in his Wygant conference notes.)

But with an institution as insulated as the Supreme Court and a protagonist as discreet as O’Connor, there’s a limit to how far inside one can get. As much as we’d love to hear what the first female justice was thinking as allegations of sexual harassment surfaced during Clarence Thomas’s confirmation hearings, the author can only speculate. “She was surely disheartened” by Anita Hill’s testimony, he writes. He does provide a contemporaneous snippet from John O’Connor’s diary about a political cartoon depicting Clarence Thomas in judicial robes with his hand on Justice O’Connor’s knee. “It really is a funny cartoon,” John wrote. (Actually, it wasn’t).