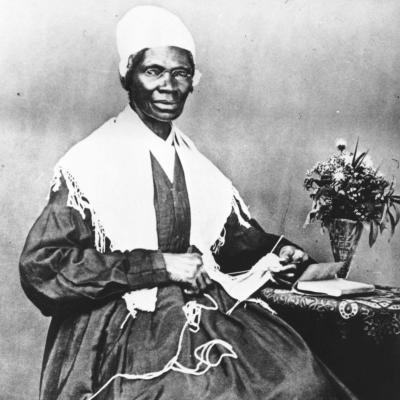 Sojourner Truth was born c.1797 as “Isabella Baumfree” to Elizabeth and James Baumfree, slaves on a Dutch-speaking settlement owned by Colonel Johannes Hardenbergh, in Swartekill, Ulster County, New York. One of 12 children, she spent her early years serving various masters and never learned to read and write. When she was nine years old, she was sold away from her parents to John Neely near Kingston, New York. He purchased her and a flock of sheep for $100. Baumfree remained at John Neely’s until 1808, when she was sold to tavern keeper Martinus Schryver of Port Ewen, New York, where she stayed for 18 months. In 1810 she was purchased by John Dumont and, after being prevented from marrying Robert, a man of her choice around 1815, she was forced to marry another slave, Thomas, owned by the Dumonts. The couple had five children: James, her first child, died in childhoon; Diana, who was the result of a rape by umont and the last three, Peter, Elizabeth and Sophia were with Thomas.

In 1799, New York State passed a law for gradual abolition of slavery. After July 4, 1799, children born to enslaved women were, by legal definition, free, but required to work for their mother’s owner until they were in their twenties (28 for males, and 25 for females). Those born before July 4, 1799 were redefined by law as indentured servants. In reality, they continued to be enslaved for life. An 1817 law declared that all slaves in the State born before July 4, 1799 would become free on July 4, 1827. John Dumont promised to emancipate Baumfree before this final date of emancipation. In 1826, he changed his mind. So, before the year ended, Baumfree freed herself and her infant daughter Sophia. She was not able to bring the rest of her family with her, and would later work to emancipate Peter after Dumont sold him south to Alabama in defiance of the law. Baumfree and her daughter found refuge at the home of Isaac and Maria Van Wagenen in New Paltz, New York. To keep her safe, the Van Wagenens paid Dumont $20 for her labor until emancipation day, July 4, 1827.

While with the Van Wagenens, she became “overwhelmed with the greatness of the Divine presence,” converted to Christianity and became a Methodist preacher. After working with a group of evangelists, she moved to New York City, and in 1843 she changed her name to Sojourner Truth. She felt that this new name would reveal to the world her mission:"Sojourner" because she would travel, and "Truth" because she told the truth about slavery wherever she went. Short of funds, she moved to Massachusetts and began a career as a traveling preacher. The following year Sojourner joined the utopian Northampton Association of Education and Industry and befriended many of the abolitionist reformers of her time. She lived with one of the association’s founders, George Benson, and began dictating her memoirs to Olive Gilbert. Her book, The Narrative of Sojourner Truth: A Northern Slave, was published in 1850 by William Lloyd Garrison.

In 1850 Benson’s cotton mill fell on hard times. Sojourner purchased the house, using the income she received from the sale of her book and as a preacher. The following year, at the Ohio Women’s Rights Convention in Akron, Ohio, she delivered her famous “Ain’t I a Woman” speech. She took that slogan from one of the most famous abolitionist images of her time, that of a kneeling female slave with the caption: “Am I Not a Woman and a Sister?”

A strong believer in women’s rights, abolition and nonviolence, Truth was a powerful and an effective speaker. In 1857 she sold her home in Northampton and moved to Harmonia, Michigan. In the fall of 1864, she journeyed from Battle Creek, Michigan, to Washington, D.C., to visit President Lincoln. During their meeting, Lincoln is reported to have told her that he had heard of her activities years before being elected president. She kept a little book in wich is kept the names of interesting people she had met. Lincoln autographed the book for her and wrote, "For Aunty Sojourner Truth, Oct. 29, 1864, A. Lincoln."

During the Civil War, she supported the Union and helped care for wounded soldiers and newly emancipated African Americans, urging them to learn to read. In her later years she campaigned for western land grants for former slaves. Although her health was in its decline, she continued to travel and speak. She died in her Battle Creek home on November 26, 1883 at age 86. She was buried in Battle Creek’s Oak Hill Cemetery. In her life, she tirelessly advocated for the rights of African Americans, women, and for numerous reform causes including prison reform and against capital punishment.

She is memorialized in countless art works, murals, and statues, and she provided the namesake for the 1997 NASA Mars Pathfinder robot Sojourner, and for the asteroid 249521 Truth.

In 2009, Sojourner Truth became the first Black woman memorialized with a bust in the U.S. Capitol.

The effect of World War II in Europe and Asia was felt heavily in the U.S. even before the attack on Pearl Harbor. (Video) The defense industry was growing rapidly because we were in a military buildup to assist our European and Asian allies. African-Americans were subjected to low-level jobs with little security or protection against the discrimination and prejudice they faced in the workplace. After President Franklin D. Roosevelt signed Executive Order 8802 which prohibited racial discrimination within the defense industry, he needed to provide adequate housing for the new additions to the workforce. Housing in many cities was substandard, especially for people of color. Housing in Detroit was strained as both blacks and whites moved from southern states to Detroit to work in the booming manufacturing industry in the city. African-Americans were unable to buy houses in the suburbs during the majority of the 20th century because of racially biased practices, such as redlining and restrictive covenants. They were forced to live in substandard housing in downtown Detroit in an area more commonly known as Black Bottom. Properties in the city had high values for what residents were getting: single-family apartments crowded with multiple families, outstanding maintenance and, in many cases, no indoor plumbing.[The influx of African-Americans to Detroit exacerbated racial tensions already present in the city and culminated at the introduction of the Sojourner Truth Housing Project.

In 1941, the federal government and the Detroit Housing Commission (DHC) approved the construction of the Sojourner Truth Housing Project with 200 units for Black defense workers. The original location for this project was to be in the 7-Mile Fenelon neighborhood in northeast Detroit which was near an already existing African American neighborhood. However, this decision was met with immense backlash. White residents in the surrounding area were joined by residents of the middle-class African American neighborhood, Conant Gardens to resist the Project.

Since the Federal Housing Administration (FHA) refused to insure any mortgage loans in the area after the announcement of the project, many area residents feared this new project would decrease nearby property value and reduce their ability to build on nearby vacant lots. These beliefs were not unjustified due to the history of decreased property values in other integrated parts of the city. On the other side, civil rights groups and pro-public housing groups rallied for the federal government to keep its promise to allow Black residents to address the housing shortage. There was currently only one other housing project in the city for African Americans. 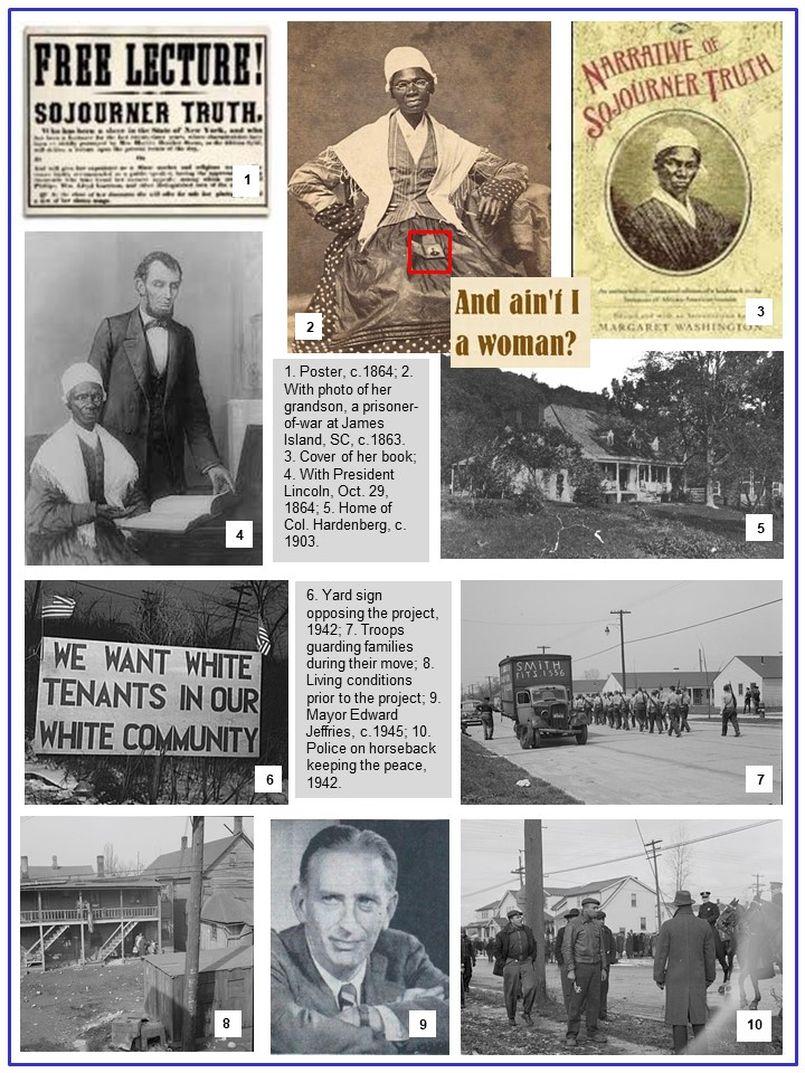 Sponsored By: Editors of Americans All
Printer-friendly version