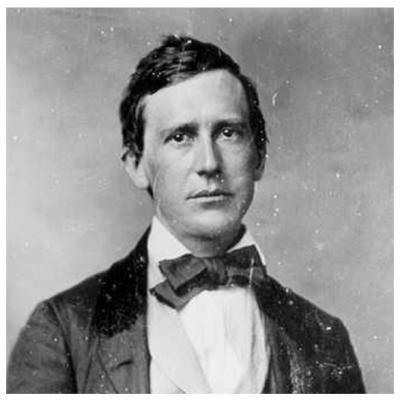 America's Troubadour of Song was an Irish American born on the fourth of July! If you said George M. Cohan, you'd be mistaken, for the title America's Troubadour of Song is reserved for another Irish American born on July 4. He was the Great Grandson of a Co. Derry emigrant who settled in New Jersey in 1725 and later moved to Pennsylvania where our troubadour’s Irish-American grandfather, James, was born in 1738. James fought in America’s Revolution as part of the Pennsylvania line which General Lee called the ‘Line of Ireland’. His Family Chronicles note that: at the outbreak of the American Revolution, he enrolled with the Liberty Company of Derry Volunteers, a fiery band of fighters of Irish blood, commanded by Captain James Cook.  He is listed as a private in Capt. Samuel Hays' company, 10th Pa Regt., from 1777 to 1781. Sometime thereafter, he joined a Virginia regiment and was present at the Siege of Yorktown and the surrender of Cornwallis.

Our troubadour’s father, William, a successful Pittsburgh businessman, served as Quartermaster during the War of 1812 and spent a great deal of his own money providing Andy Jackson’s army with much-needed supplies. He was never fully compensated for the money he advanced, but the U.S. Court noted that: He has established for himself a character for zeal, patriotism, generosity and fidelity which cannot be forgotten, and has placed a laurel on his brow that will never fade.  Despite his family's proud military tradition, a comparable career was not in the cards for our young troubadour, for he preferred to write poetry and songs. It is fortunate that he did, for he changed the direction of American music and with such songs as Old Folks at Home, Jeanne With the Light Brown Hair, and Oh Suzanna. By now, you should know we’re referring to Stephen Foster.

Born in Lawrenceville, PA, on July 4, 1826, Stephen was a troublesome child. One of 10 children, he often cut school to sit by a pond and compose lyrics. An Irish teacher named John Kelly was the only one who ever got through to the boy and did instill a little learning in him, though Stephen still preferred writing songs and singing them with his friends. When his family pushed him into the profession of bookkeeper, he showed no desire for that life.  His family concluded that Stephen Foster was destined to be a failure. He continued to write music and lyrics and had his first work published in 1844; it was a love song called Open Thy Lattice Love. In 1847, he went to Cincinnati, and there wrote Oh Suzanna, which became an immediate favorite.  His writings were now beginning to bring him royalties and he was able to make a living. He wrote Jeannie with the Light Brown Hair for a girlfriend, Jane McDowell, who later became his wife. In 1850, he wrote Camptown Races after which he wrote the immensely popular My Old Kentucky Home. One of his 1851 compositions, Sweetly She Sleeps, My Alice Fair became a favorite of the great Irish tenor, John McCormack.

In 1860, Foster went to New York, where he became a bit of a celebrity and spent a great deal of money foolishly. He attended concerts, minstrel shows and wined and dined his new-found friends; his drinking was becoming a problem. He often found himself in debt, overdrawn on his royalties and his wife left him. By 1863, the once successful songwriter was down and out, living in a rented room in a cheap boarding house in lower Manhattan. One morning he tripped and fell on an old cracked wash basin which caused a gash in his throat. Rushed to Bellevue Hospital, he survived for only a few days and died on January 13, 1864.  In his purse was 38 cents—all he had in the world! According to several biographers, the words and music to his last song were found in his room and given to his publisher to satisfy some of his outstanding debts.

Though he made a living, Stephen Foster never made a fortune during his life and only became widely recognized after his death. His only income was the royalties he earned on sheet-music sales which amounted to little more than $15,000 during his entire life.  Today it would be worth millions. In 1928, My Old Kentucky Home was made the official state song of Kentucky; in 1935, Florida officially adopted Old Folks at Home and several cities erected statues to his memory. However, it was the song found in his dingy room and released by his publisher after his death that became one of his most memorable; it is still being sung to this day. Who has not thrilled to the haunting melody and lovely lyrics of Beautiful Dreamer written by one of the Irish Americans who contributed greatly to the shaping of America’s music?  He was inducted into the Songwriters Hall of Fame in 1970.

This Irish historic happening, written by Mike McCormack, is presented by the Ancient Order of Hibernians (aoh.com).