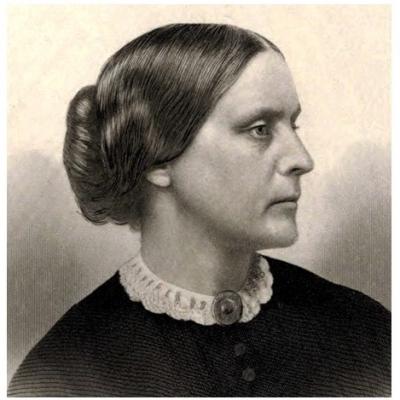 Note:  Each image in the photograph collection is linked to the text by a [number in bold brackets].

Susan B. Anthony is perhaps the most widely known suffragist of her generation and has become an icon of the woman’s suffrage movement. She traveled the country to give speeches, circulate petitions, and organize local women’s rights organizations.

She was born in 1820 in Adams, Massachusetts, to a Hicksite Quaker family. They resettled twice, first to Battenville, New York, and then to Rochester, the city Anthony called home for most of her life. Antislavery Quakers met at their farm almost every Sunday, where they were sometimes joined by Frederick Douglass [1] and William Lloyd Garrison [2]. Two of Anthony's brothers, Daniel and Merritt, were later anti-slavery activists in the Kansas territory. She also delivered speeches on the temperance circuit.

She taught for a few years at a Quaker seminary and then became a headmistress at a women’s school. In 1848, while working as a teacher in Canajoharie, New York, she became involved with the teacher’s union when she discovered that male teachers had a monthly salary of $10.00, while the female teachers earned $2.50 a month. Her parents and sister Marry attended the 1848 Rochester Woman’s Rights Convention held August 2.

Anthony’s experience with the teacher’s union, temperance, and antislavery reforms, and her Quaker upbringing, laid fertile ground for a career in women’s rights reform to grow. The career would begin with an introduction to Elizabeth Cady Stanton.

On a street corner in Seneca Falls in 1851, Amelia Bloomer [3] introduced Anthony to Elizabeth Cady Stanton, and later Stanton recalled the moment:

“There she stood with her good earnest face and genial smile, dressed in gray silk, hat and all the same color, relieved with pale blue ribbons, the perfection of neatness and sobriety. I liked her thoroughly, and why I did not at once invite her home with me to dinner, I do not know.”

Both women were in their thirties [7]: Anthony had been teaching, and Stanton was married to abolitionist Henry B. Stanton. Their involvement in the antislavery movement had cultivated a shared interest in broader equality issues, and each was passionate about the right of women to participate in the governing process and have control over their own lives. Anthony was inspired by Stanton’s vision for advancing women, and Anthony’s organizing skills were soon apparent to Stanton, who had young children and could not travel regularly. Together, they launched a national woman’s suffrage movement.

Meeting Stanton was probably the beginning of her interest in women’s rights, but it is Lucy Stone’s [4] speech at the 1852 Syracuse Convention that is credited for convincing her to join the women’s rights movement.

In 1853, Anthony campaigned for women's property rights in New York State, speaking at meetings, collecting signatures for petitions, and lobbying the state legislature. Anthony circulated petitions for married women's property rights and woman suffrage. She addressed the National Women’s Rights Convention in 1854 and urged more petition campaigns. In 1854 she wrote to Matilda Joslyn Gage [5]: “I know slavery is the all-absorbing question of the day, still we must push forward this great central question, which underlies all others.”

By 1856, Anthony had become an agent for the American Anti-Slavery Society, arranging meetings, making speeches, putting up posters, and distributing leaflets. She encountered hostile mobs, armed threats, and things thrown at her. She was hung in effigy, and in Syracuse, New York her image was dragged through the streets.

At the 1856 National Women’s Rights Convention, Anthony served on the business committee and spoke on the necessity of the dissemination of printed matter on women’s rights. She named The Lily and The Women’s Advocate, and said they had some documents for sale on the platform.

Anthony and Stanton founded the American Equal Rights Association (AERA) and in 1868 became editors of its newspaper, The Revolution [6]. The masthead of the newspaper proudly displayed their motto, “Men, their rights, and nothing more; women, their rights, and nothing less.” Also, that year, the Fourteenth Amendment passed, recognizing that those born into slavery were entitled to the same citizenship status and protections as free people. The amendment did not, however, grant universal access to the vote. A rift appeared among those, like Stanton and Anthony—and Frederick Douglass— who had been allies in the fight for universal suffrage. Anthony and Stanton were hurt that Douglass supported the Fifteenth Amendment, which granted the vote to Black men only. They felt he had abandoned woman suffrage. Douglass, in turn, was hurt by the insulting arguments of Anthony and Stanton against African Americans. They all thought that it would be impossible to get the vote for both women and African Americans at the same time and disagreed with the others’ priorities. The rift turned ugly at a public meeting of the AERA held in New York City in 1869.

Following the meeting, Stanton, Anthony, and others formed the National Woman Suffrage Association and focused solely on a federal woman’s suffrage amendment. To challenge suffrage, Anthony and her three sisters voted in the 1872 Presidential election. She was arrested at her Rochester, New York home and put on trial in the Ontario County Courthouse, Canandaigua, New York. The judge instructed the jury to find her guilty without any deliberations and imposed a $100 fine. When Anthony refused to pay a $100 fine and court costs, the judge did not sentence her to prison time, which ended her chance of an appeal. An appeal would have allowed the suffrage movement to take the question of women’s voting rights to the Supreme Court, but it was not to be.

From 1881 to 1885, Anthony joined Stanton and Gage in writing the History of Woman Suffrage. This extensive work focuses solely on white women suffragists and does not include any suffragists of color.

In 1890, the National Woman Suffrage Association merged with the American Woman Suffrage Association, which argued for state-by-state enfranchisement of women (among other differences). Stanton was the first president of the new group, the National American Woman Suffrage Association (NAWSA), but Anthony was effectively its leader. Anthony became NAWSA president in 1892. Carrie Chapman Catt [8]  replaced Anthony as president of the organization when she retired in 1900. Anthony also worked for other causes, including playing a key role in the creation of the International Council of Women. Many of the women in this March 1888 group photo [11] delivered addresses during the council’s three-week-long inaugural gathering in Washington, D.C. Standing, back row: Bessie Starr Keefer (Canada); Rachel Foster (America); Sophia Magelsson Groth (Norway); Margaret Dilke (England); May Wright Sewall (America); Alice Scatcherd (England); Margaret Moore (Ireland). Seated, front row: Laura Ormiston Chant (England); Susan B. Anthony (America); Isabelle Bogelot (France); Elizabeth Cady Stanton (America); Matilda Joslyn Gage (America); Alexandra Gripenberg (Finland). She also helped organize the World’s Congress of Representative Women at the 1893 World’s Fair in Chicago. She remained active until the end of her life. In 1893, Anthony started the Rochester branch of the Women’s Educational and Industrial Union. She also worked to raise money that the University of Rochester required before they would agree to admit women as students. And, in 1895, she was healthy enough to tour Yosemite National Park by mule. 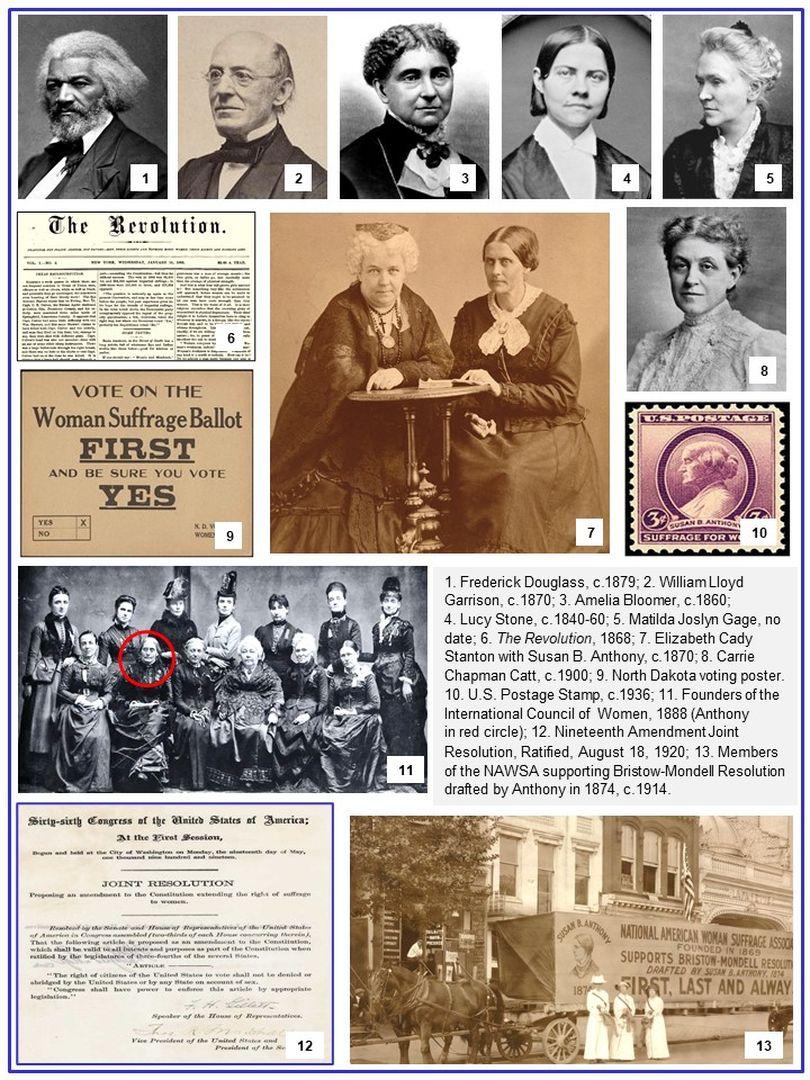