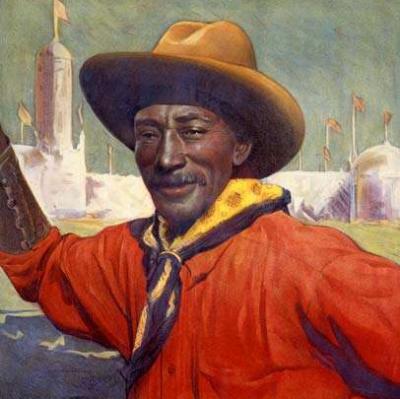 William (Bill) Pickett, rodeo cowboy, was the son of Thomas Jefferson and Mary Virginia Elizabeth (Gilbert) Pickett, who were former slaves. According to family records, Pickett was born at the Jenks-Branch community on the Travis county line on December 5, 1870. He was the second of thirteen children. He became a cowboy after completing the fifth grade. After observing herder dogs subduing huge steers by biting their upper lips, Will (nickname later changed to Bill) found he could do the same thing. He perfected this unique method of bulldogging as well as roping and riding and was soon giving exhibitions and passing the hat for donations. In 1888 he performed at the first fair in Taylor, Texas, his family's new hometown. The Pickett brothers established a horse-breaking business in Taylor, where Will was also a member of the national guard and a deacon of the Baptist church. There, in December 1890, he married Maggie Turner.

As the 'Dusky Deamon,' Pickett exhibited his bulldogging at rodeos and fairs throughout Texas and the West, creating a sensation at the 1904 Cheyenne Frontier Days, then America's premier rodeo. Bulldogging rapidly became a popular cowboy contest that evolved into steer wrestling, one of the standard events of contemporary rodeo. Capitalizing on his fame, Pickett contracted in 1905 to perform at the 101 Ranch in Oklahoma.  By 1907 Bill, as he was then called, had become a full-time employee of the ranch, where he worked as a cowboy and performed with the 101 Ranch Wild West Show. He moved his wife and nine children to Oklahoma the next year and lived and worked on the 101 much of the remainder of his life. With the show, he entertained millions in the United States, Canada, Mexico, South America, and England, and was featured in several motion pictures, the first black cowboy star. (Video)

From his earliest days in Oklahoma through the 1920s, Pickett competed in rodeos large and small and might well have amassed a significant record as a competitor if blacks had not been barred from most contests. He was often billed as an Indian or not identified as black in order to compete against whites.

Pickett died on April 2, 1932, after being kicked in the head by a horse. His friend Will Rogers announced on his radio show the funeral on the 101 Ranch, commenting: "Bill Pickett never had an enemy, even the steers wouldn't hurt old Bill." In 1972 Pickett became the first black honoree in the National Rodeo Hall of Fame in Oklahoma City. In 1989, he was also enshrined in the Prorodeo Hall of Fame and Museum of the American Cowboy at Colorado Springs, Colorado. In 1994 the United States Post Office issued a stamp in his honor, though the stamp accidentally showed one of Pickett's brothers. 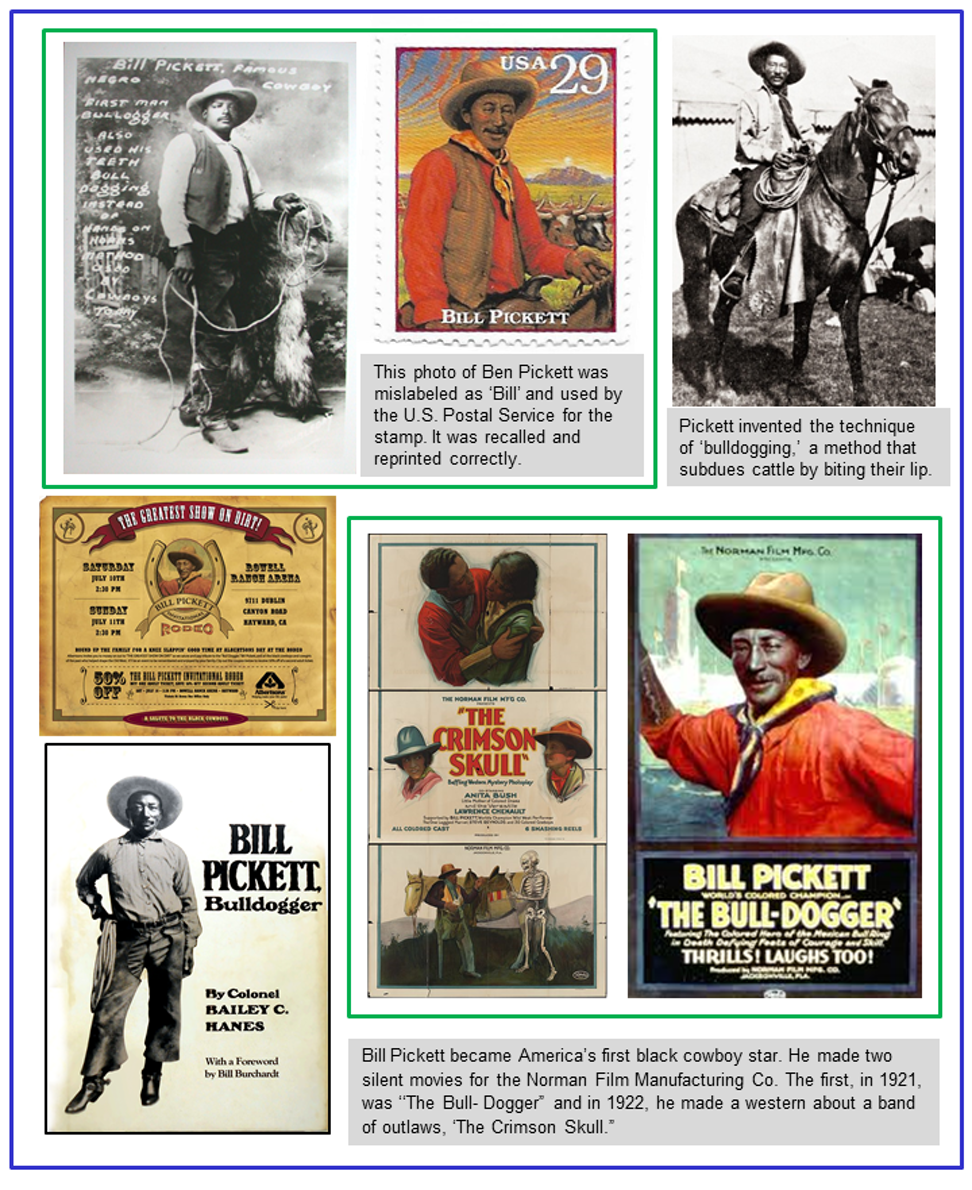