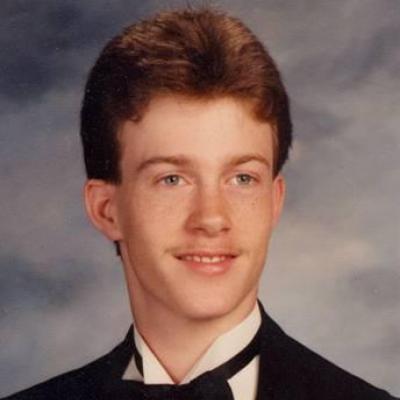 On January 12, 1992 Kenny was killed in the Line of Duty. He was a volunteer firefighter with Morningside Volunteer Fire Department in Maryland and had responded with his co-workers to a call for help from a family who lived nearby the fire station. Their home was on fire and they worried that a 7 year-old boy was trapped in the house. Kenny and another firefighter arrived on the scene and began to search the house. They found a small boy and carried him out to the paramedics. The child was pronounced dead a short time later. Returning into the house to search for more victims, Kenny became trapped in the basement when fire conditions deteriorated. The other firefighters found him in the basement of the house.

Kenny was born in Maryland. His father was a Volunteer Fire Chief in Prince George’s County, and his mother a nurse whose specialty was working with surgical patients. He and his sister spent several years as children at the fire house where they learned about volunteerism and giving back to your community. At a very early age, probably around 3 years- old, Kenny wanted to be a fireman and drive a big fire truck. He wanted to be like his firefighter dad, who was the Fire Chief of Morningside Volunteer Fire Department.

When Kenny turned 16 years- old he went to the fire station and completed the application to become a firefighter. It was then he began his fire service education. He earned certificates in Firefighter I & II, HazMat training I & II and many other courses and workshops. He enrolled in as many classes that he could manage while still in high school. He even managed a social life.

He was always the "social director" amongst his friends; they would look to him for guidance on all social matters that interested teenagers. Kenny loved family, made it a point to spend as much time with them as possible, and had a close relationship with all his cousins. He was very charismatic, but at the same time was a prankster.

Finally, Kenny graduated from high school and began submitting applications to fire departments. He was determined to become a full-time firefighter. He wanted be the best and pursued his education. When his senior yearbook was published, there was a question asked of each senior student: "What do you fear the most?" Under his senior picture was his answer, "I fear never becoming a career firefighter."

Kenny became that career firefighter with the Prince George’s County Fire Department, his badge was presented to his parents posthumously.

Kenny’s family has dedicated time working with the National Fallen Firefighters Foundation. They want to promote a legacy for firefighter life safety and supporting young firefighters who, like Kenny, want nothing more than to be the best fireman they can be.